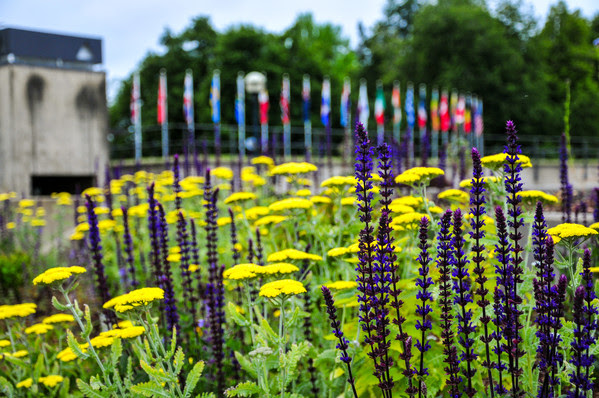 Photo Courtesy Governor's Office - A new educational garden has opened on the Washington State Capitol campus that teaches visitors the value of birds, butterflies and bees that support thousands of species of plants and food crops.

California, Oregon and Washington will continue to be a safe haven for all people seeking abortions and other reproductive health care services in these states.

The governors of California, Oregon and Washington today issued a Multi-State Commitment to defend access to reproductive health care, including abortion and contraceptives, and committed to protecting patients and doctors against efforts by other states to export their abortion bans to our states.

This Multi-State Commitment affirms the governors' commitment in response to the U.S. Supreme Court's unprecedented decision to strip away a constitutional right that has been in place for half a century, leaving abortion regulation to the states. The sweeping decision means that for patients in more than half the country, home to 33.6 million women, abortion care is illegal or inaccessible.

The governors share a powerful message that the West Coast will remain a place where reproductive health care will be accessible and protected.

"The law remains unchanged in Washington state, but the threat to patient access and privacy has never been more dangerous. Even in Washington state, Republicans have introduced about 40 bills in the past six years to roll back abortion rights and access to reproductive care," said Governor Jay Inslee. "The right of choice should not depend on which party holds the majority, but that's where we find ourselves. More than half the nation's population now lacks safe access to a medical procedure that only a patient and their doctor can and should make for themselves. Instead, law enforcement, vigilantes and judicial systems can force patients to bear the burdens of forced pregnancy and birth. Washington state remains steadfast in our commitment to protecting the ability and right of every patient who comes to our state in need of abortion care, and we will fight like hell to restore that right to patients all across the country."

Over the past several years, each state has taken action to expand access to reproductive health care in preparation for just such a decision:

In 2018 Governor Inslee signed the Reproductive Parity Act that requires all health plans that include maternity care services to also cover abortion and contraception. In 2021 he signed the Protecting Pregnancy Act that allows doctors who practice in Catholic-run hospitals to bypass ethical-religious directives and provide medically necessary abortion when a woman's life is in danger. Earlier this year Inslee signed the Affirm Washington Abortion Access Act that better ensures the ability of Washington abortion care providers to serve any person who comes in Washington state seeking an abortion. Washington law also protects patients and clinic personnel from harassment outside of clinics. Further, when federal changes were made to the Title X program to not allow family planning clinics to reference abortion as an option, Washington state stepped up to fund the Title X clinics instead of having to comply. While the federal funding has been restored, the state will continue to provide needed funding to support access to abortion.

Additional proposals are being considered with the Legislature.

Oregon led the nation by passing the most comprehensive reproductive health legislation at the time. Governor Brown signed Oregon's Reproductive Health Equity Act into law in 2017 -- a first of its kind bill that expanded access to reproductive health services for all Oregonians and codified the right to an abortion into state law. Adding to that work, Oregon invested $15 million for community-based organizations to expand access to abortion across the state and provide immediate support to patients, health care providers, and community advocates, with a focus on rural communities, communities of color, and low-income communities to overcome barriers to access.

On June 25, Gov. Jay Inslee and state legislators held a press conference to discuss some of the policies they are working on to strengthen access and support for abortion providers and patients. Inslee said Democratic leaders are united in making Washington a sanctuary state for all patients seeking abortion care.

Some of the measures the governor and legislators discussed include:

Pursuing a constitutional amendment that solidifies the right of choice in Washington.

An executive order that directs the Washington State Patrol to refuse cooperation with investigatory requests related to abortion that come from agencies in states that don't allow abortion.

$1 million in emergency funds to better ensure reproductive care clinics in Washington state can provide care to every patient who walks through their doors.

A new educational garden has opened on the Washington State Capitol campus to raise awareness of the importance of pollinators such as butterflies, bees and birds that ensure the health of flowering plants across Washington state. Pollinators are under threat, and the new garden will enlighten visitors to just how critical these species are to plant life.

Pollinator populations have declined due to habitat loss, invasive species, pesticides, and climate change. Washingtonians can help protect these important species, which are responsible for pollinating 85 percent of the world's flowering plants. This includes more than two-thirds of the world's food crop species.

"We depend on these 600-plus species to propagate vegetables, flowers, and other plant life that are central to our economy and culture in Washington," said Gov. Jay Inslee at the opening event. "We are all connected to these pollinators, so this teaching garden will help remind us of their value."

The garden is open to visitors seven days a week. Information about visiting and a full list of plants found can be found at the new Capitol Campus Pollinator Garden web page. Information about how you can support pollinators in your own backyard is available from Woodland Park Zoo.

Gov. Jay Inslee visited Cashmere on Friday for the grand opening of Beta Hatch, a company whose innovative process to farm insects for livestock consumption is making headlines for shaping the future of farming. The company's facility will be the largest in North America and is sustainably designed to save water and reduce greenhouse gas emissions. The startup company was supported in part by a grant from the state's Clean Energy Fund.

Insects are a natural food source for animals, are protein-rich, and are grown in a sustainable fashion that reduces greenhouse gas emissions. Beta Hatch harvests insect larvae indoors through a unique process using heat captured from a nearby data center.

"Insects are natural bio-recyclers and the base of most food chains. Here, we're producing them at a massive scale. We've converted an old juice factory into a bug factory," said Dr. Virgina Emery, Founder and CEO of Beta Hatch. "We generate 5,000 times the acre yield of soy with a small fraction of the typical water use."