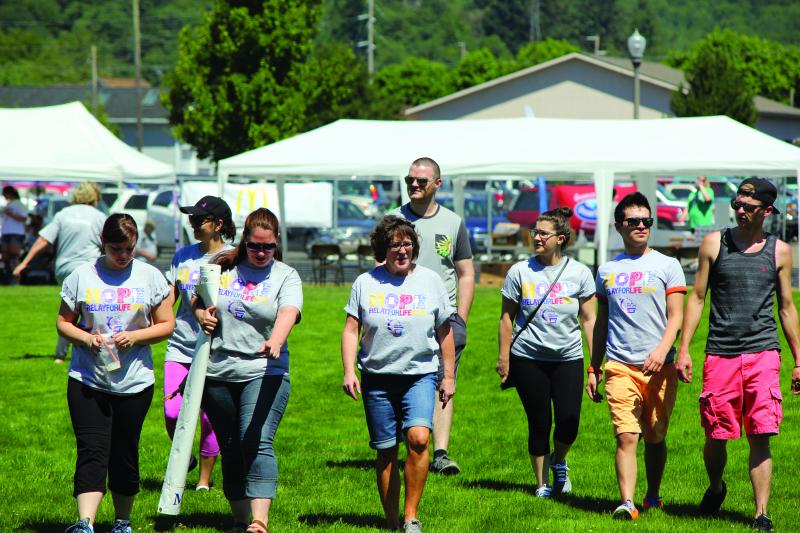 Relay for Life teams start to gather for the opening ceremonies. 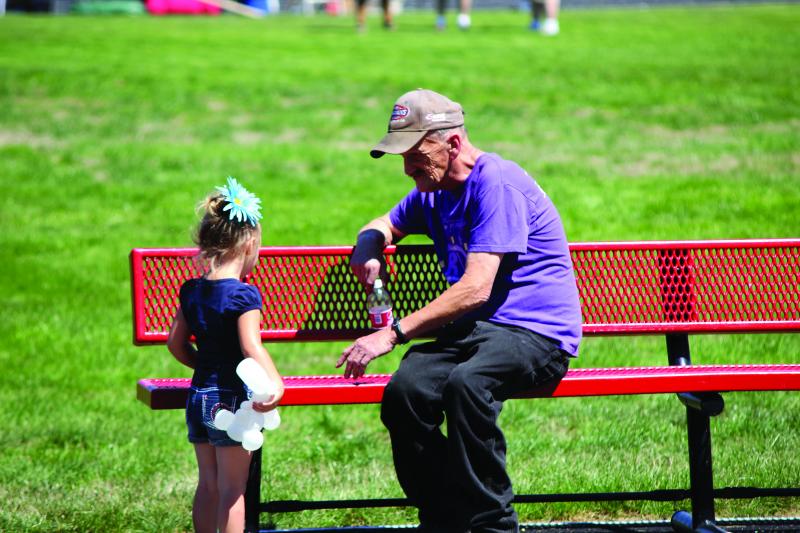 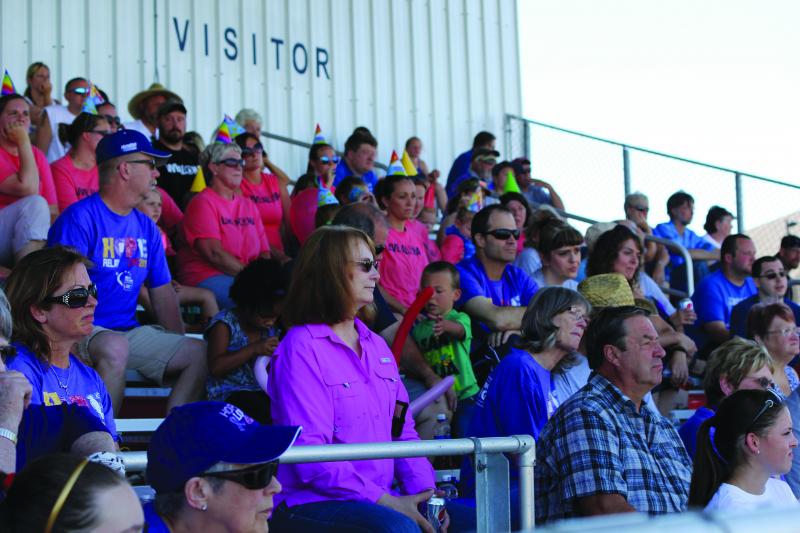 A crowd filled the stand at the Raymond High School track during the 2015 Relay for Life event. 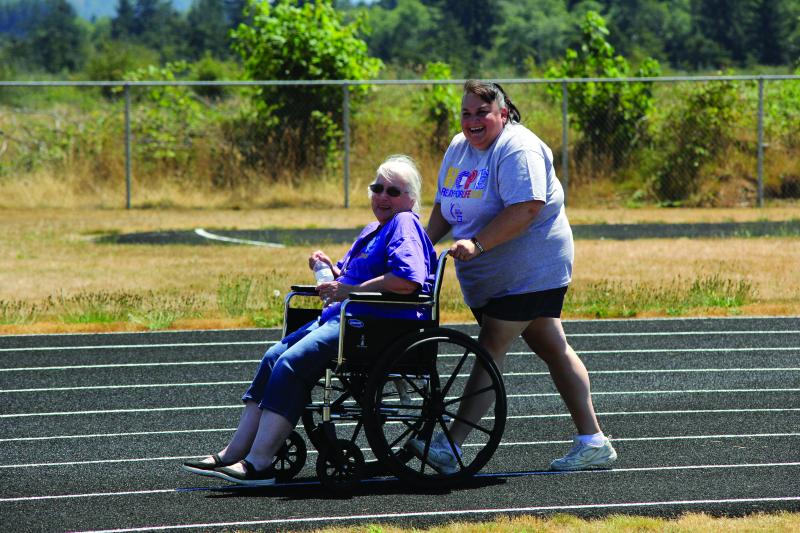 Everyone gets a trip around the track even if they need a little help. Families, friends, caregivers and supporters all gave a hand where it was needed during the Relay for Life event in Raymond. 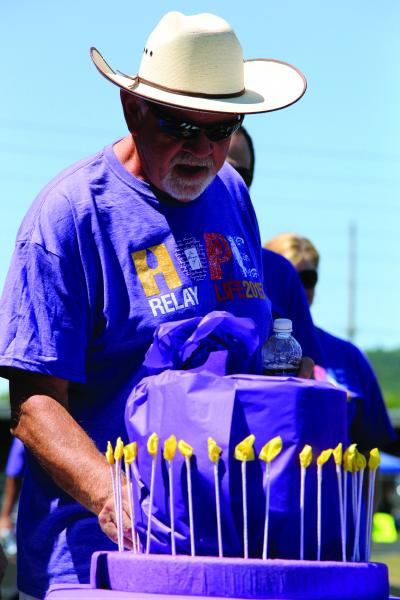 As they crossed the finish line of the Survivor Lap each cancer survivor placed a candle on the birthday cake to signify another birthday realized. 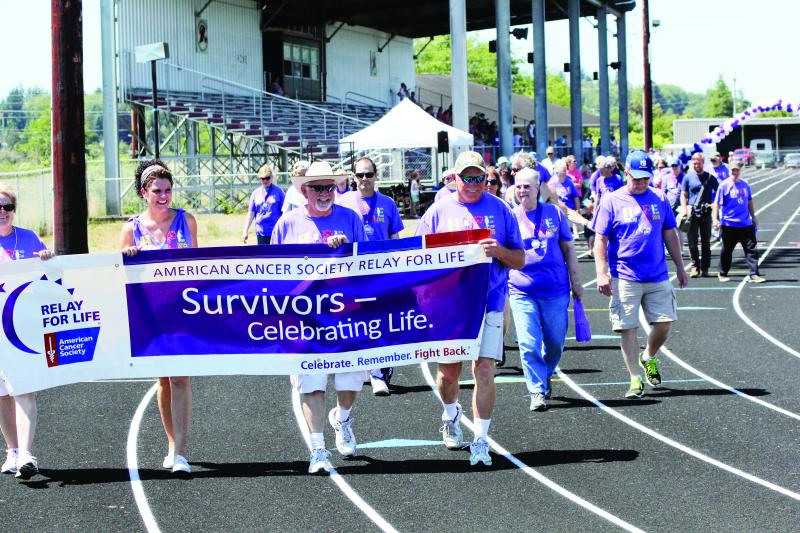 The first lap of the Relay for Life for Willapa Bay takes cancer survivors around the track at Raymond High School. The event is starting to grow with more teams joining and more people in support.

This weekend saw the Willapa Bay Relay for Life event held at the Raymond High School. And even with the hotter than normal weather, many came out to support the event to help battle the fight against cancer.

During opening ceremonies, Sherelen Wildhaber shared her story and entertained the crowd before the Survivor's Lap was started.

Wildhaber, a five-time cancer survivor of four different cancers, was first diagnosed in 1982. After her initial battle with uterine cancer she was advised that she had contracted colon cancer in 1984. She thought it was all behind her and was cancer-free for the next 25 years.

In 2009, Wildhaber learned the news that she had Stage III bladder cancer and had a kidney removed. Again the doctors felt that they had removed the cancer and she started to carry on with her life and had a clear scan in 2011.

In 2012, the bladder cancer returned now at Stage IV, and advised Wildhaber that nothing surgically could be done. After a few months of chemo the latest tumor had shrunk a little and consults said that their might be something that could be done but with many risks. After more consulting, the word came back that no one was willing to take the risk and perform any additional surgery.

A new treatment was identified, Cyberknife Radiation being conducted at Swedish Hospital in Seattle and Wildhaber took the meeting to see if she would be a viable candidate for the treatment. The series of treatments was successful and Wildhaber experienced energy that she had not felt for the previous year.

In November of 2012, a CT scan showed no hot spots of cancer and a PET scan in February 2013 showed no cancer from her neck to her knees. But one year later in February 2014 everything was looking clear, but a golf ball-sized tumor was found under her collarbone. Wildhaber went with the cyberknife treatments again and killed the cancer. As of December 2014 she has been given the all clear.

Her journey was an emotional trek for the audience to hear all that Wildhaber and her family had gone through as she continued with her story and thanking everybody that has supported her during her battle with cancer, especially the caregivers. She ended her story with a song from a collection of songs that she has produced. A humorous yet frank song about her battle with cancer, it brought several laughs and applause from the audience.

Joining the front of the line for the Survivor's Lap to start the Relay for Life, Wildhauber and others took a mock candle in hand and when they finished their initial lap, placed the candle on a birthday cake to symbolize another birthday for those surviving cancer.

So far the nine teams associated with fundraising have brought in just over $32,000.

Teams set up camp on the infield of the track providing several ways to enjoy the day and keep people cool and active for the event.

People were noticing that the event is starting to grow in sponsorship and vendors with more showing up this year than in the previous year.

Shilo's Peeps leads the current charge raising over $7,000 for the cause. Team Family Ties, Raymond High School and Beach Babes all raised over $2,700 a piece. One team, The Wolf Pack, held a separate bake sale the Friday before at Growers Outlet and brought in $250 before they had to close down due to the heat of the day. Staff at Growers Outlet took the remaining items inside the store and continued to hold the fundraising for the team and during the Relay for Life event brought in another $250 in donations, part of their $1,300 total.

"We thought it would be a good place to hold a bake sale. Everyone who came through the store either donated or made a purchase from us before we had to move out of the direct sun. It is great to see everybody helping each other in this community," said Brendie Hansen of Team Wolf Pack.

"We got started a little late this year in helping the Relay for Life. But next year we hope to be more involved and bring in a few more people from the marijuana industry to help the community, said Andrew Tessier of Growers Outlet.

The combination of Team Weyerhaeser, Willapa Bandaide Brigade, The Wolf Pack, Holy Walkamoles and the Cancer Spankers brought in a total of over $6,600 in donations with the final count still waiting to be received.

Top contributing individuals were Angela Silvernail, Dianna Bolling, Jimmy Greenfield, Edna JonasWeber and Faye Bolling with a combined total of $6,500.
Donations are still being accepted for the annual cancer fundraiser.