4X4 fans drop off much-needed donations on their way to Mt. St. Helens 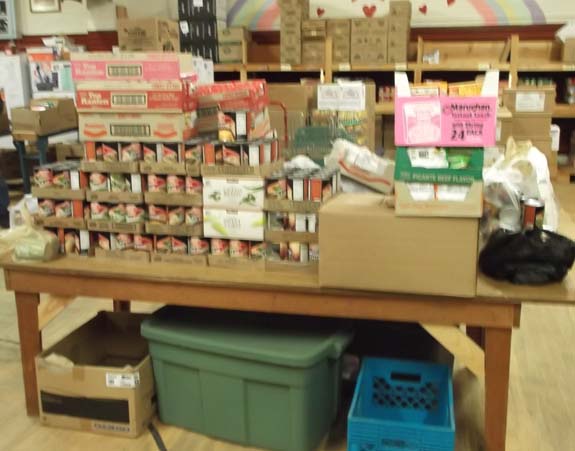 530 pounds of food and other items were donated by the visiting recreationalists, a number food bank organizers encourage other community groups to try and out-do.

Saturday brought 4X4 enthusiasts from Oregon, Montana and Washington on a yearly trek to Mount Saint Helens Observatory, including an annual stop at Toledo's Food Bank to drop off donations and show support.

The trip to the observatory was begun in 2004 by NWBombers.com forum group member Bob V., the 12-truck convoy added the food bank stop in 2006, with Daryl of NWforddiesel.com heading up the drive until 2011, when members of forddieselpower.com joined the annual run.

Shipley announced the volume total for the year to the assembled crowd, triggering a challenge by the 4X4 Clubs to other food drive organizers, such as the Walk and Knock in downtown Toledo, Boy Scouts, Toledo Schools and church groups to beat their 530-pound total and raise the bar.

For the second year, Toledo's Food Bank is now accepting gifts for adults young and old for the Children's Holiday Shopping Event. Where Toy Drives provide presents beneath the tree for the kids, this event allows the younger family members choose gifts for parents and grandparents.

Plans for a similar food drive to Mt. Hood and Hell's Canyon can be tracked on Face Book at facebook.com/smokeonthemountain. Toledo's Food Bank is open second and fourth Fridays from 11 a.m. - 1 p.m., and welcomes donations for the Christmas event. Or email: toledofoodbank@yahoo.