A knead for seed: Vader residents attend class on making their own flour and bread 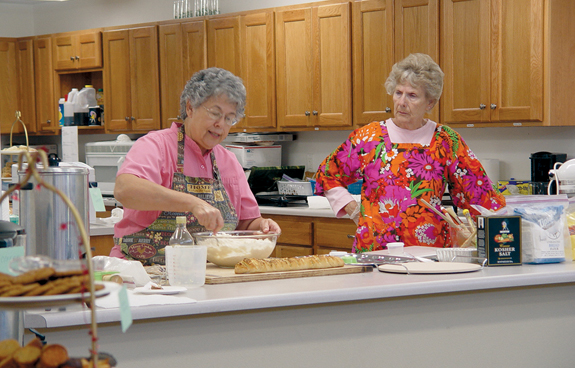 Vader resident Liz Hicker (left) teaches guests how to prepare dough for artisan bread during a break-making and grain-milling class at the Vader Assembly of God Saturday, assisted by Sylvia Hacke (right).,

Vader resident Liz Hikcer said, for the last year or so, she and her husband have been making their own bread due to increasing food prices, and are loving it.

So much so, Hicker taught a class Saturday at the Vader Assembly of God on how to make your own bread from store-bought or freshly-milled flour. Organized with help from the church’s women’s ministry, the event was to the public and provided participants with a booklet of fresh bread recipes as well as important information on how to process and store fresh flour (freezing was reccomended).

To provide examples, Hicker took the audience through the steps of preparing dough for pita bread, English muffins, and her favorite, artisan bread. Hicker noted this had been her first time leading a group in the finer points of bread-making, which she picked from her father during his career as a baker.

Throughout the presentation, as well as in the booklet, Hicker reminded participants of the significant role bread has taken in scripture, as well as the world’s religions, and described the breaking of bread as a cultural bond nearly everyone on the planet shares.