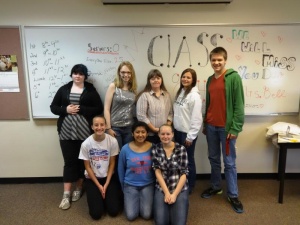 Retiring RHS teacher Denise Bell posed with a handful of students on her second to last day of work as a teacher. The students had written messages to her on her white board, wishing her farewell and good luck.
Garoutte-Bell retires from RHS
Posted on:
By:
By KAYLA CAMENZIND

Denise Garoutte-Bell of Raymond High School and Mike Schroeder of South Bend are retiring this school year. Bell taught in the alternative learning classroom for nine years at RHS, and Schroeder taught history, tae kwon do and math for 35 years at South Bend.

more
Raymond looks deeper into medical marijuana
Posted on:
By:
By Scot Pearson

At the regular Raymond City Council meeting on June 2, the agenda was light and consisted mainly of the first reading of city ordinance 1827, medical marijuana. 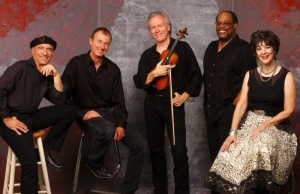 “Dance-able music.” That's how Karl Heinicke of South Bend describes the sound of Tom Rigney & Flambeau, the group scheduled to perform for Sunday Afternoon Live on June 15, Father's Day, at the Raymond Theatre. 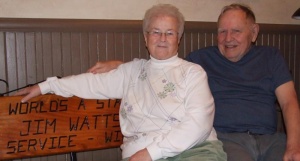 LaRayne and Jim Watts at the Hannan Playhouse. The two have been strong advocates of community theater for several years.
Willapa Players’ cast, crew call for ‘full house’ to celebrate Jim Watts’ last production
Posted on:
By:
By Viv Edersheim

When “My Three Angels” closes June 19 at the Hannan Playhouse, Jim Watts’ long career in local theater will come to an end as well. The play’s cast and stage crew hope the local community will mark Watts’ swan song with a full house – every night of the performance.

Kids Under Construction Bible School
Posted on:
By:
Staff

Build a bright future at Kids Under Construction.

On June 11, Pastor Laurie Johnson will visit the Raymond Kiwanis to talk about the Community Gardens in South Bend. 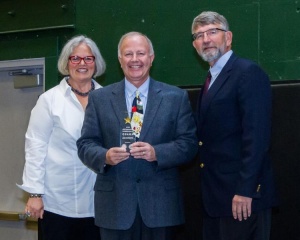 South Bend High School was chosen as a 2013 School of Distinction and awarded the Washington Achievement Award by the Office of Superintendent of Public Instruction (OSPI). The high school was awarded for having “high progress” on state test scores and it also received a “special recognition for math growth” award for the years 2010-2013. South Bend was recognized at an awards banquet in Lacy last month. 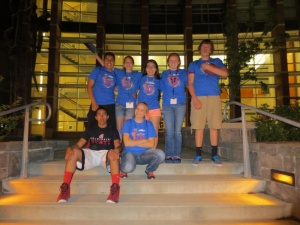 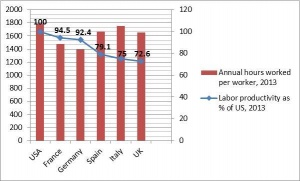 Do the French Ever get Things Done?
Posted on:
By:
By Kayla Camenzind

more
Health Insurance Options for Early Retirees
Posted on:
By:
By Jim Miller

At age 63, I will be retiring in a few months and need to find some health insurance coverage for my wife and me until Medicare kicks in. Is Obamacare my only option?

WHH - Letters to the Editor

Ayers Helps All Citizens
Posted on:
By:
Staff

Recently I had a problem with a serious code violation in my neighborhood.

more
Coucilwoman Supports McClain for Prosecutor
Posted on:
By:
By Vicki Flemetis 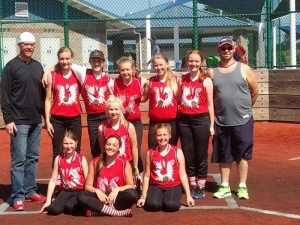 The Willapa Hornets, with consistent heads up play, earned a second-place finish at the highly competitive 12 and under softball tournament at Lacey May 31-June 1st. The Hornets gutted it up and played the whole tournament with only nine players. In front from left are Avery Harland, Raina Jones, and Hannah Miller. In the middle is Aiyana Stepp. In back from left are Coach Steve Silvernail, Karley Redinger, Hallee Layman, Arie Stepp, Sadie Warnstadt, Madeline SilvernIl, and Coach Lyle Miller.

Flag Day, celebrating the birthday of the American flag
Posted on:
By:
By KAYLA CAMENZIND

Flag Day, a time to recognize the history and heritage of the American flag, is a day to demonstrate our patriotism and respect for America’s history.

Access permits will go on sale for the Pe Ell Aberdeen Weyerhaeuser tree farms on June 18 and June 19, 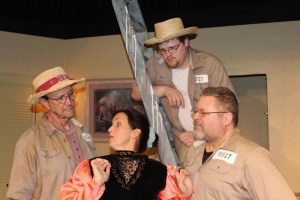 The Willapa Players play, “My Three Angels,” by Sam & Bella Spewack opens Friday, June 13, at 7:30 p.m. at the Hannan Playhouse, 518 Eighth St. in Raymond. In one scene the three convicts/angels— Joseph (played by Curt Harris, left), Alfred (played by Ashton Winrich, center on ladder), and Jules (played by Matt Nordin, right), frighten Madame Parole,(played by Joelle Springer, center), an unpleasant customer who has come into the shop. New performance dates are Saturday, June 14 at 7:30 p.m.; with two performances on Sunday, June 15, a matinee at 2 p.m., followed by an evening show at 7:30 p.m. The play concludes with a final performance on Thursday, June 19, at 7:30 p.m. Tickets are $10 for general admission and $8 for seniors (over 65) and students (through college); they are available at South Bend Pharmacy, Just a Haircut, Everyone’s Video and More, The Pitchwood, and at the door.

WHH - Glance at the Past

Glance at the Past

From time to time, the Herald will take a glance at the past to see what we did and how we did it. Take a look to see where we were and what we were doing…