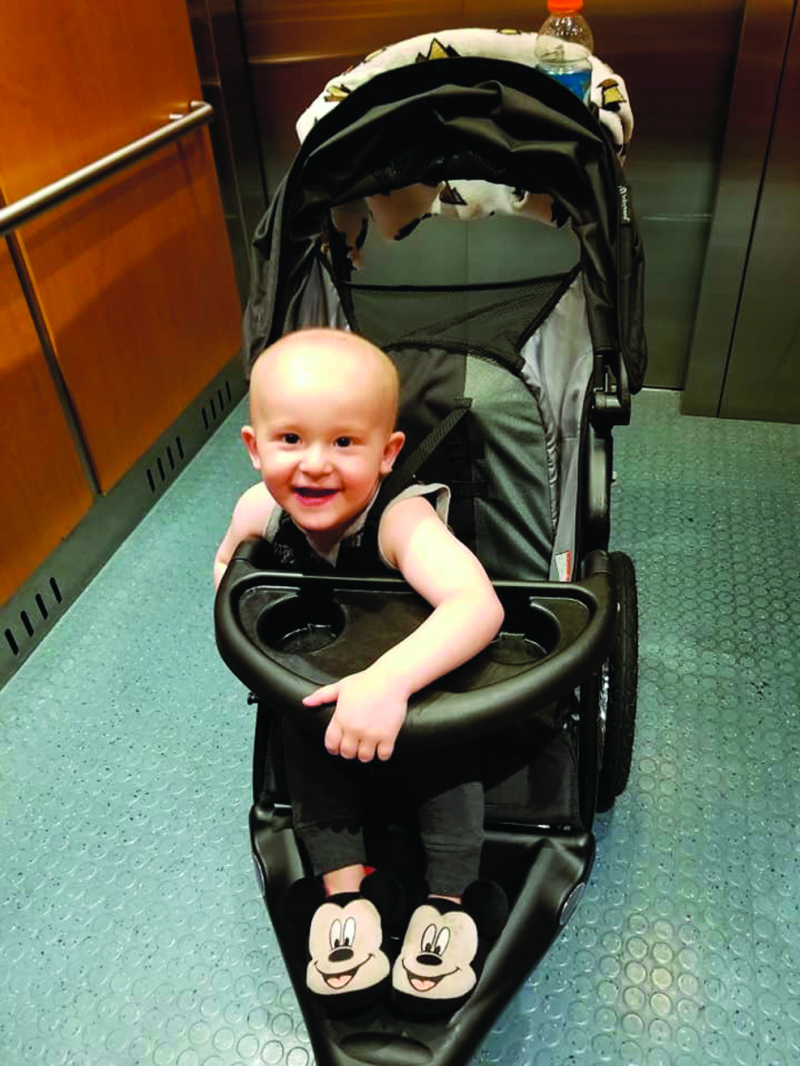 Bjorn Roth is just two years old, born on May 16, 2016 and he has already been through more than most of us will endure in our lifetime.

Bjorn was diagnosed with B Cell Acute Lymphoblastic Leukemia, a diagnosis no parent wants to hear. He was diagnosed at Mary Bridge Emergency Department on June 18, 2018. His Aunt Evie Leef stated, "they felt a lot of guilt, did they not see something. After a couple of days, the doctor said that it had probably been active for 8-9 months but there were no signs they could have seen." Evie continued, "they felt shock and disbelief."

David, father of Bjorn stated, "he is a good kid, he doesn't deserve this. Bjorn is a two year old, he hates to go to the doctor and going to get treatment. He just wants to be a two year old. His will to play is bigger than his ability to play, he is tired all of the time."

Evie, his aunt and Allstate Agent here in Winlock stated, "he only wants mommy and daddy, but he did let me cuddle him for 5 minutes when I brought the 'Fight like Bjorn, teeshirts."

Bjorn has been in intensive chemotherapy treatments because he is high risk patient, but it is not working. They are looking at the possibility of trial treatments or a bone marrow transplant. Evie stated, "he is as tough as nails, like his dad, David," who is Evie's nephew. "David is a special young man," Evie continued.

"One of the sweetest families I know, great parents, they need the community support financially," stated Evie. They are having an event at Applebee's in Chehalis on September 29 from 8:00 a.m. to 10:00 a.m., tickets are available for $10. There is also a Go Fund Me account under Battle-Leukemia-With-Bjorn for financial donations. Cash donations can be made at Wells Fargo Bank under the name of "Battle with Bjorn." You can also purchase teeshirts, bracelets and other items at the Allstate office here in Winlock on Morton road or drop off any financial donations there as well.

Bjorn will probably be transferred to Children's Hospital in Seattle, where the family will be staying as well. It's expensive to stay in Seattle, drive back-and-forth to home for their 6 year old daughter Jade. They have a financial need for accommodations, food, gas, everything associated with treatment for a young child. We are a strong community, let's help this family out.

Bjorn's parents are David and Amy Roth from Napavine. The City of Napavine adopted a Proclamation announcing "Childhood Cancer Awareness Month, September 2018. Please consider making a donation or participating in the Applebee's fundraiser. This young family needs the community support to help Bjorn become the young man he was meant to be.