Biosolids may be coming to Toledo 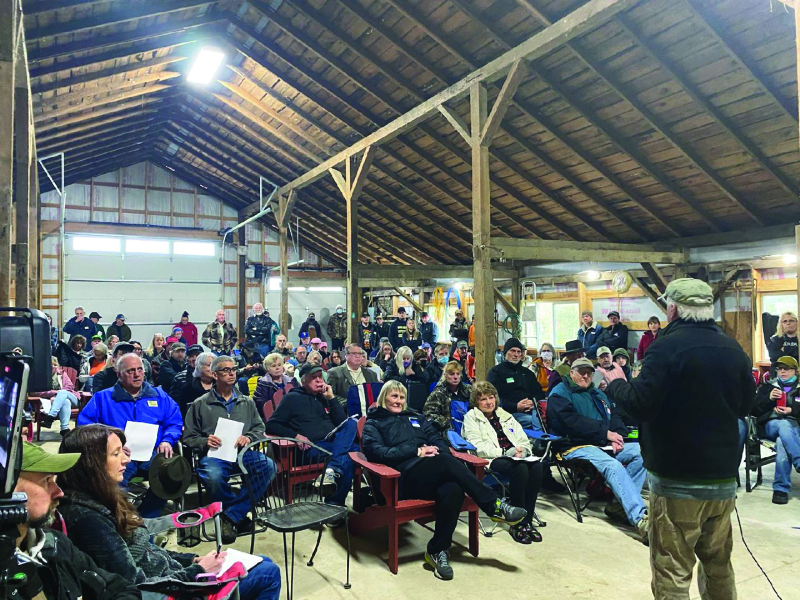 On a rainy Sunday afternoon, about 100 people gathered at the farm of Tom and Sharon Layton. They were there to discuss a new business that is coming to Layton Prairie that may have serious adverse effects on the residents and quality of water and soil. The business is called Bio-Solids, but most refer to it as sewer sludge.

Currently there are 400 acres set aside for this in Layton Prairie that have recently been purchased by Dan Ritola along with acreage owned by Greg Armstrong. The company paying these individuals to spread biosolids is Tribeca. Spreading biosolids is a very lucrative business.

Biosolids that are class B are defined as: Biosolids Class B have undergone treatment that has reduced but not eliminated pathogens Bio-solids, commonly referred to as sewer sludge, is human waste that has gone through a sewer treatment plant.

The guest speaker at this event, Richard Honour with the Precautionary Group, has his doctorate and has studied sewer sledge, discussed the many hazards on health and animals who are eating foods treated with biosolids. In fact, Richard has been in the sewer sludge business since the 1960s and he has endured several types of cancer related to sewer sludge. He stated, "nearly all chronic diseases of man are incited in low levels of contaminants or pollutants. Long term exposure to sewer sludge has caused cancer and other chronic illnesses.

Richard stated, "Don't believe it's safe, it's toxic waste. There is no such thing as safe sewer sludge." Many wonder why they are hazards to your health, all medications end up in the sewage. Antibiotics that are in human waste end up on the field, as does every medication, chemical and illness.

Jeff Wilson is an activist against sewer sludge who lives in Toledo. He worked in the business and stated, "there were 60 of us, now only 5 are remaining alive."

The effects of sewer sludge have killed 55 of his friends.

The CDC has chimed in on biosolids and have issued a warning on the risks of sludge. "An upcoming report by the Centers for Disease Control and Prevention concludes that sewage sludge that has been converted to fertilizer can pose a potential health risk from E. coli, salmonella, hepatitis B and other bacteria and viruses." The EPA's Inspector General concluded, "In March, an audit by the EPA's inspector general concluded that the EPA cannot assure the public that current land application practices are protective of human health and the environment.' The study found that biosolids may result in increased risks to the environment and human health. Auditors have found that the EPA reviewed only 38% of the reports sent to it by waste treatment plants, performs few inspections of the plants and does not keep track of the cumulative amount of pollutants at sites where sludge is spread, and there 'is virtually no oversight' of the program The EPA says that the states are supposed to self-regulate because the EPA doesn't have the manpower to inspect every site in the country."

Patty Kinswa Geiger who is on the council of the Cowlitz Tribe was in attendance. She informed this group, the tribe will help keep their lands safe. She stated, "Spraying sludge on the lands near tributaries of the Cowlitz River or near the Cowlitz River will create seepage into the river. This will kill the wildlife, the fish and not to say poison to the families that live on these lands, that's why we need to prevent this. Patty has been an activist with the Cowlitz Tribe regarding what is ancestral land.

Diane Ellis who is a resident nearby stated, "We will be pushing back until the State of Washington is forced to dispose of this toxic waste in an environmentally friendly way."

Sharon Layton who hosted the meeting stated, "I do not think science has proven it safe."

This group of people in Toledo are passionate about getting sludge removed from the possibility of being sprayed on the fields. They do not want their beautiful Layton Prairie filled with chemicals which could have very long lasting effects for decades if not hundreds of years.

Lewis County News reached out to Greg Armstrong for a quote, but we did not hear back from him at the time this article was published.

A follow up meeting is tentatively set to take place at New Life Assembly in Toledo at 2:00 p.m. More information can be found on their Facebook page Toledo Citizens Against Bio-sludge.