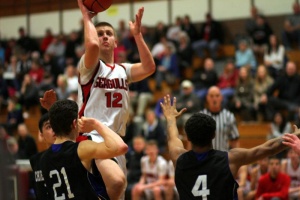 The Lady Indians started the tournament on Feb. 9 and suffered their first loss to Wahkiakum 67-27 and had to face local rival Willapa Valley two days later.

Running out to Rochester for the match, the Lady Vikings ended the season for the Indians beating them in a "loser out" game 60-38. The Lady Indians finished their season with an overall record of 9-12. The Vikings next had to face Life Christian Academy.

The Lady Vikings started their District IV run dropping their first game to Onalaska, 52-47. Moving along the bracket, next up was South Bend and a win for the Vikings. Pushing on...Willapa Valley was matched up against the Eagles of Life Christian Academy. The Eagles pushed the Lady Vikings out of the running by defeating them 52-31 on Feb. 16 in Montesano. Willapa Valley ended their season with an overall record of 17-6.

The boys of Willapa Valley carried over the Napavine Tigers in their opening on Feb. 10 with a close game, 68-61. The Viking boys took their initial win and traveled to Montesano on Valentine's Day to play against the boys of Life Christian Academy. That game ended in defeat for the Vikings, another close one, 63-58. This took the Vikings from the right side of the bracket to the left in a loser-out game with Ocosta on Feb. 16.

See the Willapa Valley Boys game for the details of the 55-61 loss to Ocosta that finished the Vikings season at an over all 2014 record of 14-9.

Both the Sea Gals and the Sea Guys continue their run at a Washington 2B State berth taking their teams to Black Hills Feb. 18, in loser-outs games. The Lady Seagulls will face the Life Christian Academy Eagles and the boys will meet up against the Ocosta Wildcats.

The Lady Seagulls have already beat the Eagles in a regular season game 52-39 and stand just above them in the 2B Pacific League standings with a better overall record of 18-5 so far this season. Both teams have an 8-2 league record. Raymond took their first win over Pe Ell 64-27, but fell to the Napavine Tigers 65-47, on Valentines Day. The loss sent the Lady Seagulls back to Montesano two days later in a must-win against the Toledo Indians. The girls proved their worth with a narrow win over the Indians 50-45 and have picked up Life Christian Academy as their do-or-die game in Black Hills.

The boys of Raymond fell quickly in their first game in District IV play on Feb. 10, losing their opener to Mossyrock 57-44. With only one day for practice, they caught the yellow shuttle to arrive in Montesano pitted against the Warriors of Chief Leschi on Feb. 12. Bouncing back from their initial loss, the Seagulls took the Warriors 67-40 and moved on to Rochester to take their game against The Hyaks of North Beach. See the Raymond over Hyaks story for the specifics of that game. Making it one of the better games of the night, Raymond squeaked by the Hyaks 68-63 and move closer to a top finish but need to face Ocosta in Black Hills on Feb. 18.