Both Valley teams headed to regionals 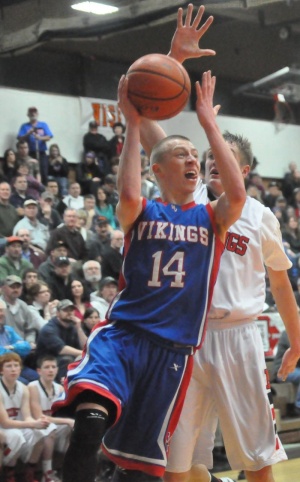 Photo by Steve Rogers Willapa Vallety HS Senior Matt Konigsberger goes to the hoop against a Napavine defender in the Vikings' tournament loss to the Central League Tigers.

Vikings next task vs.

“We played a really solid basketball game,” Willapa Valley HS Head Boys Basketball Coach and Pacific League co-Coach of the Year John Peterson told the Herald. “Defensively, we did a fantastic job on their two best players, Cory Thornton (5 pts), who averages over 17 points a game, and Gabe Hernandez (6 pts), who is the Pacific League MVP. Those two average around 35 points a game and we held em to (11). Matt (Konigsberger) and Cody (Buchanan) both did a fantastic job.

“Offensively, we hung right in there,” Peterson said. “I was very pleased with all the kids; they do their roles really well.

“Anthony won the game for us,” Peterson said. “He had five threes. It was completely out of the blue. Anthony was on fire. It was an unbelievable performance by him. Every time they got close, he'd hit a three. He had the game of his life.”

Stephen Camenzind pulled down 12 boards and scored 10 points for a double-double. Matt Konigsberger popped in 12 points. Sagen also had 4 steals.

The Hyaks, who also qualified to the regionals, fell to 23-4, with three of the losses coming at the hands of Willapa Valley.

Valley's (20-5) next task is at the regional when it takes on Bear Creek (20-2) at Bothell HS on Friday at 6 p.m. The game was switched from its originally scheduled time of Saturday (2 p.m.) because the Valley girls are playing Saturday at 4 p.m.

“Bear Creek is a really talented basketball team with one big post and a lot of really, really good athletes,” Peterson said. “They play a 2-2-1 press and a 2-3 zone. I feel like we can play with anybody if we play well.”

The eight winning teams from the regional sites head to the state tournament this weekend.

Valley was defeated in the District IV semi-final game by Mossyrock 58-54 in overtime last Wednesday night at Centralia. Konigsberger (15), Camenzind (12) and Sagen (12) provided the brunt of the scoring punch for Willapa.

Mossyrock held the edge on the boards 29-22.

“We went into the game knowing we had to try to slow the game down because they're a really high-scoring team,” Peterson said. “They jumped on us 12-2, so we went to a zone and it really bothered 'em. We had the lead with two minutes to go. We had 'em, and unfortunately, we didn't quite get it done. Anthony was really good, and Stephen and Matt hung in there and played hard.

“I'm just so proud of these kids,” Peterson said. “They're an amazingly resilient group. They just never quit. I'm just sick for them. We had 'em. If we would have won, the regional would have been at Chehalis. Overall, I'm really, really pleased.”

In a seeding game played Saturday at Centralia, the Vikings trailed by only five points with 35 seconds to play, but a trey was missed and the Loggers hit their free throws and put the game away.

“It was a really good basketball game,” Peterson said. “Both teams were really tired. Travis McMillion is just a great, great player. He's just so good, and he scored 27 points, and Drew Pearson did a heck of job guarding him. He had to work for everything he got.”

Camenzind poured in 20 points for the Vikings and Konigsberger scored 8 and pulled down a dozen rebounds.

The Vikes committed only 9 turnovers.

Napavine crushed Raymond 57-37 to put the Seagulls out of the tournament and end their season. Jayce Freeman scored 15 points for Raymond, which ended with a 10-12 record.

The Gulls fell behind 17-4 after one quarter and never recovered. Raymond was out-rebounded 35-17 by the much taller Tigers.