Cadets get a grip on defensive tactics in Winlock 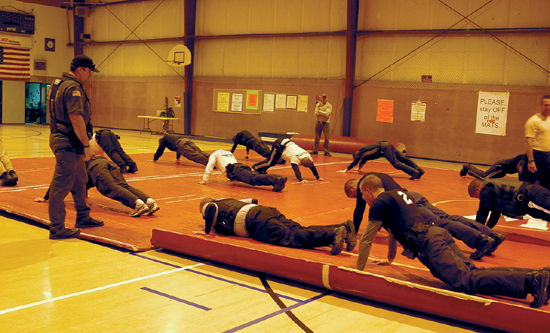 Cadets with the 2013 Police Reserve Academy in Winlock are put through rigorous physical exercise while learning defense tactics Thursday in the gym of Winlock Miller Elementary School. Cadets were pushed to their physical limits—some even to the point of nausea—to teach them they can’t give in during an actual physical confrontation with a suspect when their life may be on the line. This and other physical training took place at the academy throughout last week. 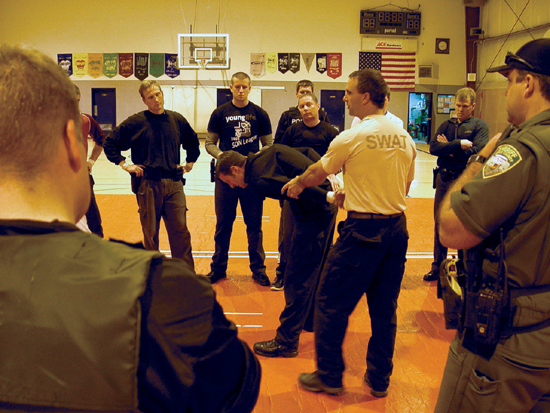 Instructor Corey Butcher (mid-ground right), of the Centralia Police Department, displays the proper form for a straight-arm hold on cadet Ryan Owen (mid-ground left), of the Centralia Police Department. The hold is intended to leave the subject off-balance and prone to painful joint manipulation if necessary. Butcher said such techniques are taught to cadets through repetition and are meant to employ the base motor skills of the user in the event an adrenaline rush or other impairment inhibits fine motor skills. 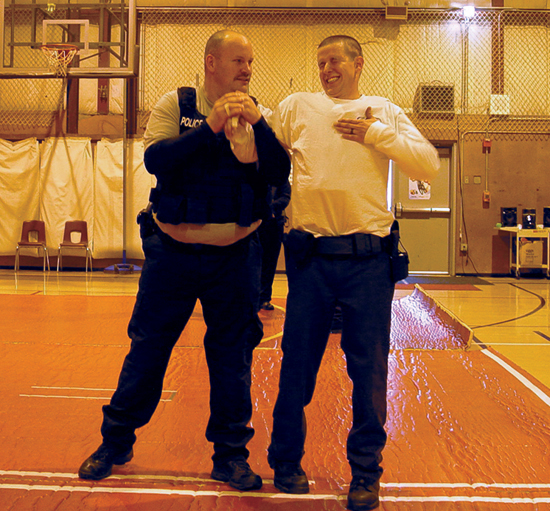 Cadet Mike Boone (left), of the Tenino Police Department, practices a Gooseneck Hold on cadet Neil Seifert (right), of the Winlock Police Department, so-named because it manipulates a suspect’s wrist and forearm into the shape of a goose’s neck and head. Cadets were told to tap on their chest when a hold became too painful during practice and the gooseneck resulted in many swift tap-outs throughout the gym. This reporter was dumb enough to ask an instructor if it really hurt that bad, and said instructor was glad to show him it did. 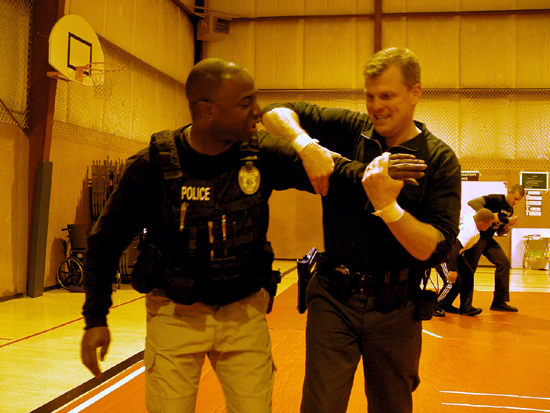 Cadet Pete Hall (left), of the Tenino Police Department, is subjected to a Z-hold by cadet William Radtke (right), of the Lewis County Sheriff’s Office. Multiple combinations of holds and throws were taught as cadets will face multiple scenarios while on the job, with Butcher stating he has yet to actually use a Gooseneck Hold among his varied techniques while in the field.