Cage Teams go 0 for 5 at District 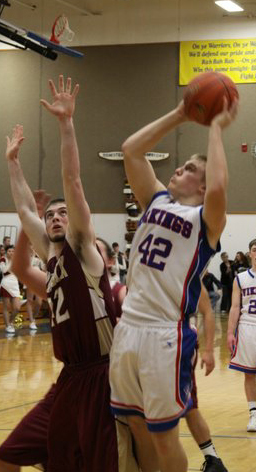 Cage Teams go 0 for 5 at District

It was a like a Bad Day at Black Rock for four local basketball teams at the District IV tournament Saturday. Both of Raymond’s teams and the Willapa Valley boys and the South Bend girls took it on the chin and were sent to the elimination bracket. And, Willapa Valley’s girls’ team lost in the first round last Wednesday. However, two wins qualify a team to the Regional playoffs.

Adna drilled in 10 three-point baskets and connected on 50 percent of its field goal shots. Meanwhile, Raymond was only 2 of 13 (15%) from the arc.

“Unfortunately, we didn’t have one of our better games against Adna Saturday afternoon,” Raymond HS Head Boys’ Basketball Coach Mike Tully told the Herald. “We knew Adna had some good shooters, and we gave them too many open looks. To Adna's credit, they shot the ball really well (10-20 on threes). We did a nice job of forcing Adna into a number of turnovers; we just couldn't convert those turnovers into points. Offensively, we settled for too many long jumpers early in the shot clock.

“Now we need to regroup and prepare for a tough road through the losers bracket, starting with Wahkiakum on Wednesday night,” Tully added. “Wahkiakum plays a similar style to Adna; so hopefully we've learned something from Saturday's game.”

Raymond played the game without point guard Marvin So, who was out because of academic ineligibility.

Enrique Hernandez burned the nets for 28 points and Winlock used its powerful board play to defeat Willapa Valley.

The Cardinals out-rebounded Valley 33-25 and committed only 11 turnovers while forcing the Vikings into 17.

It was Raymond’s first loss since the season opened against Napavine. The Lady Seagulls had won 19 straight.

Raymond led 7-5 after the first quarter but was outscored 17-6 in the second stanza to trail 22-13 at halftime. Raymond didn’t score a field goal in the second quarter until the one-minute mark. After breaking an 8-8 tie, the Lady Tigers never trailed. Napavine won the third frame 10-8 and both teams scored eight points in the fourth quarter. Raymond crept to within four points (32-28) with 5:09 to play but could get no closer.

Poor shooting at the line and from the floor spelled doom for Willapa Valley in its opening round game against Wahkiakum at the District IV Girls’ Basketball Tournament at Montesano’s Bo Griffith Memorial Gym last Wednesday. Wakiakum came up with a late rally to tie the game and then won it overtime 52-45.

“It was close all night but we missed a couple shots and free throws at the end of the game and that gave them the chance to tie it up,” Willapa Valley HS Head Girls’ Basketball Coach Melissa Aust told the Herald. “There were several times right at the end and then in overtime that we let them drive right in to the basket and shoot or else pass to a post and score. “We had a couple offensive droughts, which let Wahkiakum stick around and hang on,” Aust said. “It was a very physical game and at times we didn't rebound that well. I thought our defense was strong and we gave enough pressure to make Wahkiakum turn the ball over.”
The Lady Vikings were cold at the free throw line – sinking only 9 of 24 for 37 percent. Valley was worse from the floor at 24 percent (16 of 66).

Aided by 10 Wahkiakum turnovers, Valley got off to a decent start while leading 12 after one quarter but the lead was cut to 19-14 at intermission. Wahkiakum trimmed the lead some more after three quarters (26-24). The Lady Mules outscored WV 15-13 in the fourth quarter to force overtime with the teams tied up at 39-39. Wahkiakum won the overtime session 13-6. Valley made only 3 of 12 charity tosses in the fourth quarter.

Valley trailed 35-34 with 1:24 left to play in the fourth quarter, and then sank two baskets to lead 38-35. After that bucket, Valley made only 1 of 6 free throws the rest of the quarter. With 37 seconds to go in regulation, WHS’s Sammi Boyce canned a J from the baseline with :23.2  and scored a layup at :07.1 to tie the game at 39. Valley’s Morgan Walker could have won it at the horn but her 3-foot puppy was off mark.

In overtime, Wahkiakum jumped out to a 44-39 lead and that all she wrote. Boyce drilled 4 of 6 free throws in the last two minutes to keep Willapa at bay.

Boyce and Baylee Olsen popped in 15 points apiece for the Lady Mules and Haylee Budd scored eight. Wahkiakum was 21 of 54 (39%) and 7 of 17 from the foul line.

The Lady Loggers jumped out to a 23-14 lead after one quarter and were ahead 33-25 at halftime before outscoring SB 28-10 in the second half.

The Lady Indians shot well at 47 percent but took only 30 shots.

Last night’s girls’ loser-out games featured North Beach vs South Bend (11-10), 6:30 at Montesano; Willapa Valley (12-9) vs Toutle Lake, 8 p.m. at Montesano; Mossyrock vs Raymond (19-2), 6:30 at Rochester; and Northwest Christian vs Wahkiakum, 8 p.m. at Rochester. The winners qualify to the regional and play Thursday and those winners play Saturday and again on Monday at Chehalis.