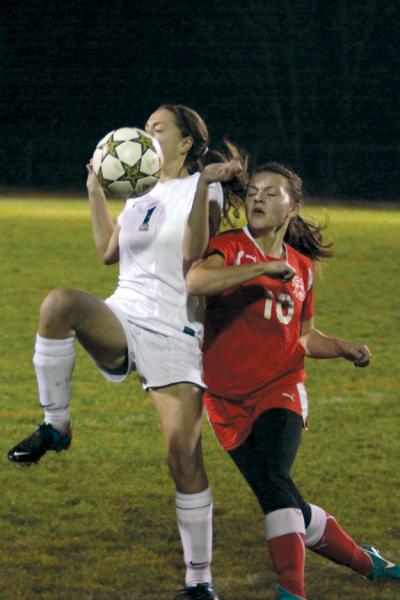 Tori Horner (#1) and Castle Rock’s Mikayla Risner (#10) battle for possession of the ball during the final regular season game between the two teams on Thursday night.  CR won the game 3-0 and will be advancing to postseason.

While the Toledo/Winlock players honored seniors and their families on Thursday night, Castle Rock simply waited to take care of business.

The Lady Rockets, under the leadership of Head Coach Brian Ziese, have moved from the lower levels of the Trico League into postseason contenders in a year.

They proved that with a resounding 3-0 Trico League victory over Toledo/Winlock United, a team that has terrified them in recent years.

“They have always had really good athletes.  It has been a good team,” said United Head Coach Horst Malunat about Castle Rock.  “It is just now they are much more organized.  I think that is what he (CR Head Coach Brian Ziese) has provided them.”

It has become typical to describe Castle Rock’s scoring with the names Mikayla Risner and Jaynie Snaza.  Risner took her speed and the ball and deposited the first goal in the 14th minute of the game.  Snaza was assisted by Taylor Fletcher.

After the halftime, United looked like they had a successful attitude adjustment and bombarded Rocket Goalkeeper Megan Millward with a flurry of shots in the first 10 minutes.  The veteran goalie stood her ground and then Snaza added a third goal for CR in the 49th minute.

“We played well in the second half,” said Malunat.  “They had two shots on goal and they scored one.  It really deflates you because you have all the pressure.”

Rocket Head Coach Brian Ziese is still concerned about the future. “They came out and got their stuff done,” he said of his team.  “I wish in the second half they could have come out with a little more fire.”

The bottom line is Castle Rock will be playing soccer in the days to come.  Toledo/Winlock soccer players now begin to think about indoor sports.

Goal Keeper Millward was feeling very proud of her team after her first three years of varsity play. “It wasn’t me doing this,” she said of her goal defense.  “It was our coach, the team and the dedication that we have that brought us this far.  We are not a team; we are really more of a family.”

Castle Rock finished the regular season at 10-6 and will begin its playoff life at Elma on Tuesday night.