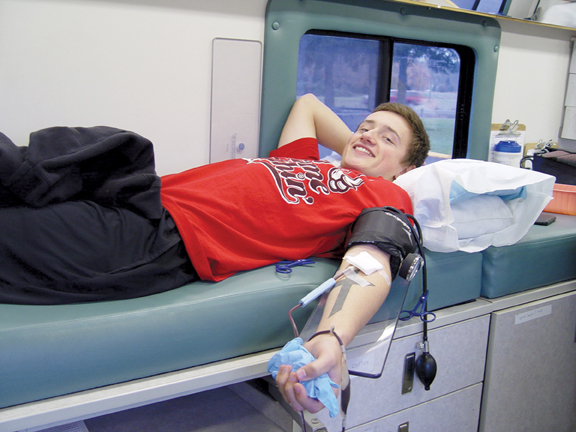 Castle Rock senior Jacob Howe donated blood for the first time during a blood drive at the school Friday.

The Winter Blood Drive for Castle Rock High School saw 90 students signing up Friday, with more donors coming in from the community.

Held in partnership with the Puget Sound Blood Center (PSBC), the drive is one of two organized by the school’s Honor Society, along with a spring blood drive in March with the Red Cross.

Honor Society advisor Sue Strickland said the efforts her students took to plan the event, including the coordination of volunteers and the production of baked goods for donor recovery, had helped the school well toward its seasonal goal of 60 units of whole blood.

"This is a wonderful turnout this year," she said, adding some students who signed up may not have been able to donate due to low iron levels, disease or other factors, but 60 units seemed a very achievable goal nonetheless.

And PSBC will take all they can get because, contrary to some popular perceptions, they are the sole provider of donated blood in Cowlitz County, providing blood to such institutions as St. John Medical Center without support from other entities.

Donor Resources Representative Yvette Olive said such circumstances encourage PSBC to push for more local blood drives as those in the area who may one day need blood will be contributing to organization collecting it.

At the end of the day, students who signed up to donate seemed ready and willing, including many athletes, for whom special scheduling considerations were made, as the drive was planned after fall sports and before winter practice begins.

One student donating for the first time, senior Jacob Howe, said the process seemed far less painful than he had expected, particularly based on what his father told him it would be like.

For those wishing to organize a similar blood drive in either Cowlitz or Lewis County, contact PSBC at 800-DONATE-1, ext. 4388.