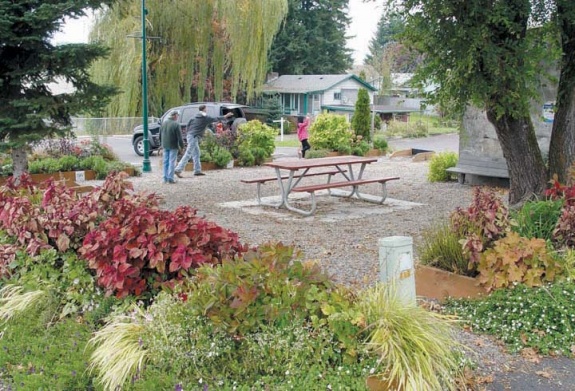 Planters arranged around the park by Castle Rock's old City Jail were one of the fixtures noted by judges with America in Bloom, who have recognized the city for its attractive landscaping.

The City of Castle Rock has been recognized for its attractive landscaping through an award from the National America in Bloom program.

Community activist Nancy Chennault, with the Castle Rock Community Development Alliance, presented the award to the City Council during their Oct. 14 meeting, thanking officials for supporting efforts to enter the city in the annual program.

"Congratulations, Castle Rock," she said. "Thank you very much for allowing us to participate as a community."

She said the award has been unexpected, as Castle Rock had not been selected for awards in any of the pre-selected categories, but stated the city typically receives high marks for the various landscaped fixtures around town.

Chennault said City Hall itself usually gets a great deal of attention, as well as Lions Pride Park and the flower boxes in road medians. She added new flower boxes at the park behind the Community Building were recognized, and said the recognition the community is receiving for it's beatification efforts has been "very exciting."

She was also quick to share credit for the award with the Castle Rock Chamber of Commerce and it's members, noting the city's entry into the program had been "a team effort" between the Chamber and City Hall.

America in Bloom is an Ohio-based non-profit seeking to encourage the use of flowers, plants, trees, and other environmental and lifestyle enhancements to improve America's cities.