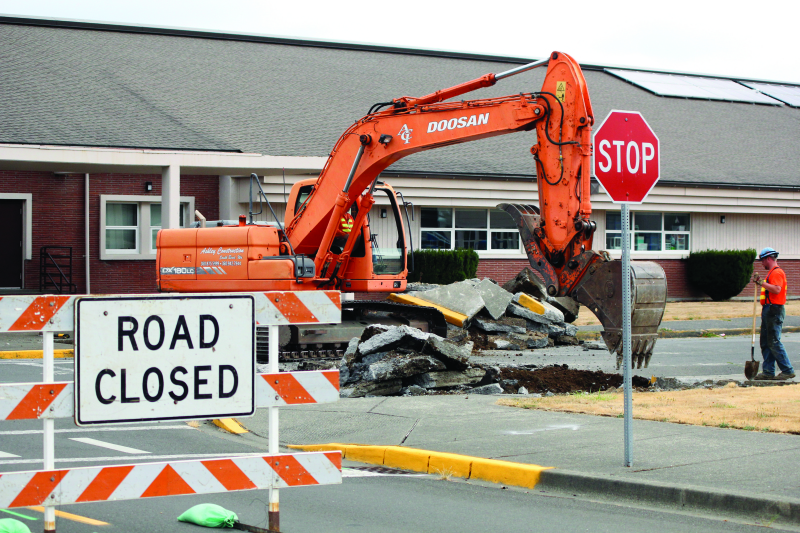 Quigg Brothers has started the construction of the Commercial Street project. The hope is to have at least a gravel surface restored prior to the start of school.

Things may get a little tricky if you use Commercial Street in Raymond as construction is getting underway to resurface the street.

One additional impact will be to those utilizing Pacific Transit as the Commercial Street bus stop has been relocated to Alder Street (next to the Carriage Museum) for the duration of the construction.

The Raymond Fire Department will have priority use of the street during the construction phase, as local traffic will be restricted and no traffic coming off 101 onto Commercial Street will be allowed.

To get around the construction local residents are encouraged to utilize Duryea or Heath Streets. The closure will run from Third Street along Commercial to Highway 101 and from Highway 101 to Ninth Street by Raymond High School. All side streets that connect to Commercial along the route will be closed at the Commercial Street intersections.

"We hope to get the construction finished around the school before school starts," said Scott Pearson of the City of Raymond.

The construction is part of Raymond's Six-Year Transportation Plan and has been on the books for a while. After the construction is completed, Commercial Street will be totally new with sidewalks; curbs and ADA approved crosswalks as well as will be re-striped.

"Some of the utilities and power will also go underground," said Pearson, "we will redo the storm drains, gutters, everything. It will be all new from curbside to curbside."

The existing water and sewer lines will not be impacted and are reported to be in good condition. The street will also get some new lighting.

The city asks for patience as they work through this construction project and to be mindful of the detours and do not enter signs to ensure that crews have a safe work environment as they make the improvements to the city.

"As we progress the construction route and traffic will change, so people need to be aware of the changes as they happen."

The City also would like the residents to know that no business will be closed during the construction but you may have to use an alternate route to get to local businesses.

"The construction will be in two phases. After the completion of Phase I the other lane of Commercial Street will be closed with a final completion date in October," said Pearson.