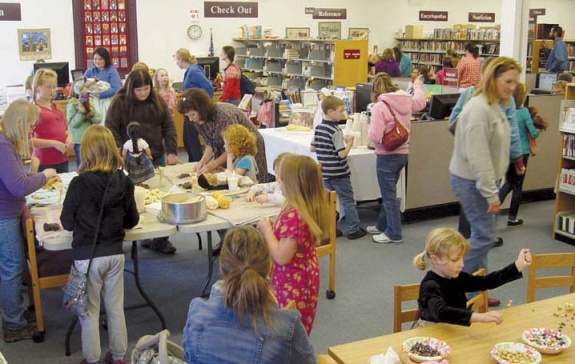 An abundance of guests entered the Winlock Timberland Library Saturday to take part in the American Girls Tea Party, and event celebrating the line of dolls based on historical fiction meant to encourage young women to learn about American history.

Guests turned out in great numbers Saturday afternoon to take part in the American Girls Tea Party at the Winlock Timberland Library.

Held every other year since 2006, the party was first started by Library Manager Jamie Allwine, who said her appreciation for the line of dolls, as well as the historical fiction and craft books associated with each one, began when her daughter was old enough to enjoy them.

"I love them," she said, stating the dolls on display at tables throughout the library were from her own collection, while the books corresponding to each one came from the library’s inventory.

In addition to telling a dramatizes vertion of history from the perspective of the girls and their families, American Girl books also feature crafts and food from their time and their history, and events at the tea party allowed guests to try their hand at crafts suggested in the books.

One popular station was the table for American Girl Josefina, from 1820s New Mexico, and featured cornhusk dolls custom-made made with the help of library volunteers. Allwine said the degree of difficulty posed by crafting the dolls may have been a little greater than other crafts that day, but said she felt the popularity of the table was "totally worth it."

Allwine also endeavored to craft the American Girl-specific snacks at each table, including almond cookies, gingerbread cookies, and queen cakes (muffins made with currants). She said items for both the food and the crafts were purchased with the help of funds raised by the Friends of the Winlock Timberland Library, and were bought locally when available.

Rather than a tea party this time next year, Allwine said the library will alternate and hose a birthday part for Laura Ingalls Wilder, the author famous for such books as Little House on the Prairie. When the tea party returns in 2015, Allwine said she hopes to alternate activities to keep the event fresh for participants. For more information about these and other library events, call (360) 785-3461.