Echoes from the past: Spanish influenza comes to Washington state in 1918 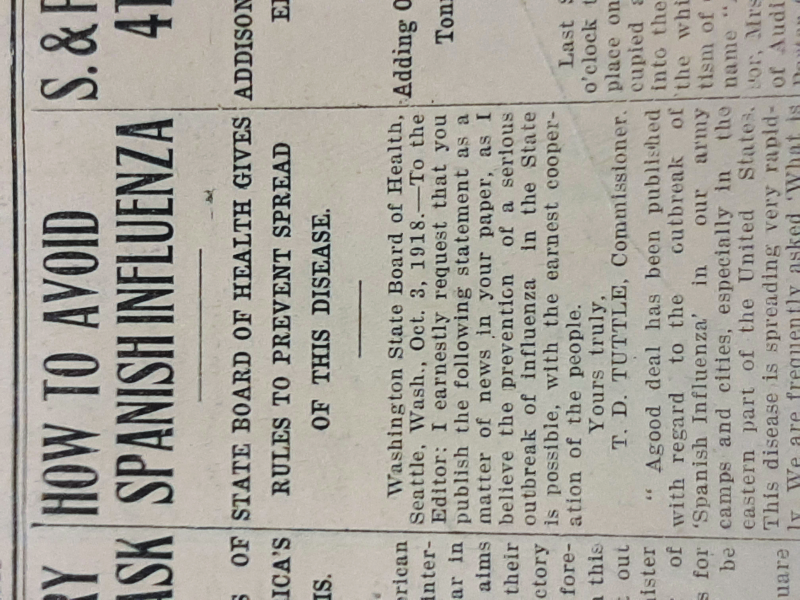 Photo taken out of the Raymond Herald Friday October 11th 1918

Over 100 years ago, the United States was dealing with another pandemic, the Spanish Influenza Epidemic. By October 3, 1918 this disease arrived in Seattle with 700 cases and one death at the University of Washington Naval Training Station. During WWI this variety of influenza ran rampant in military camps overseas.

Discovering the advice of the experts in 1918, it seems that many of the steps are similar to what we have been advised to follow today.

To the editor I earnestly request that you publish the following statement as a matter of news in your paper, as I believe the prevention of a serious outbreak of influenza in the state is possible, with the earnest cooperation of the people.

"A good deal has been published with regard to the outbreak of 'Spanish influenza' in our army camps and cities, especially in the Eastern part of the United States. This disease is spreading very rapidly. We are frequently asked 'what is the probability of an outbreak of this disease in the state of Washington?' My answer is, the disease is already here. It has not assumed epidemic form as yet. It can be prevented by assuming epidemic form only by the earnest, conscientious and intelligent help of every citizen of the state. It is not deemed practical to establish quarantine for this disease. The means of preventing the spread of the disease are so simple that they are usually neglected, but we urged them upon each citizen and ask each man, woman and child in the state as a patriotic duty, as an effort to conserve man-power and woman-power, to practice the following simple precautions:

1. Never cough or sneeze without holding a handkerchief before your face.

2. Keep away from public gatherings and public places as much as possible. If necessary for you to go into crowded places get out as soon as possible.

4. If you have any symptoms whatsoever of grippe stay-at-home. Do not visit others or permit others to visit you. Keep your windows wide open so that you may have an abundance of fresh air. If you do not promptly recover, or if you feel ill, call your physician.

The above mentioned precautions are extremely simple and yet if you will only consider for a moment, you will realize that we are asking you to practice well and Terry quarantine instead of trying to put you under quarantine by law. We are asking you as a patriotic service to actually go into quarantine and stay there until all danger of spreading the disease is past. Should the disease become epidemic in your community, it will be necessary to close all places of public gathering."

During 1918, this was a good guess at how to keep safe during the epidemic. In October 1918, Washington State did not know that it was a pandemic yet. The world had not discovered viruses yet. They knew about microbes and that sickness could be spread through respiratory drops. Viruses were not officially discovered until the 1930s when higher powered microscopes were developed.

Also during 1918 there were no tests for the Spanish Influenza and there were no vaccines to treat the disease. So far, the 1918 Flu epidemic was the deadliest in recorded history.