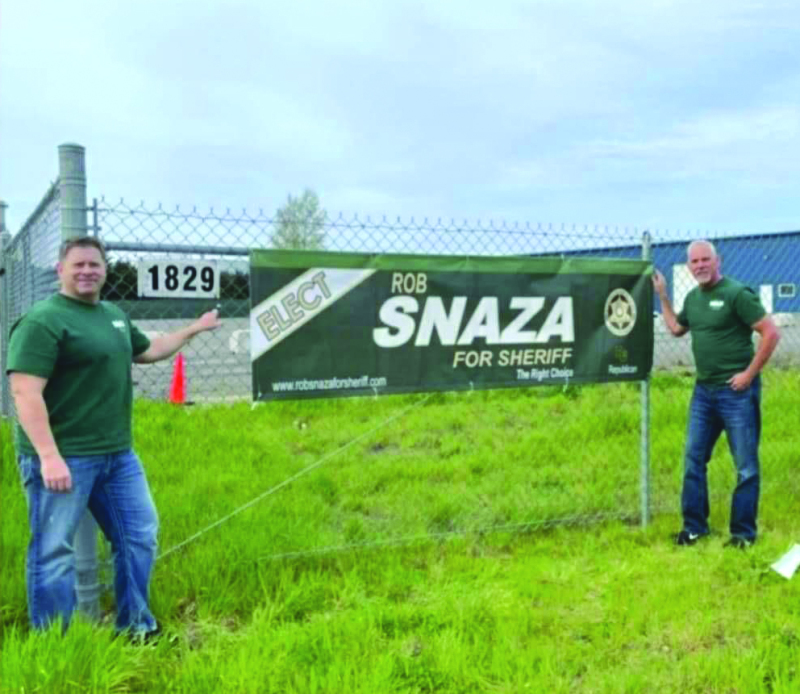 Sheriff Snaza with Deputy Van Wyck at the Robbie and Danny Nelson compound. Snaza also received an endorsement from the Nelsons at that time.

In July of 2022, after receiving a tip, JNET (Joint Narcotics Enforcement Team) started an investigation into Robert Nelson for allegedly selling drugs. During the investigation it was uncovered that Robert and his brother Daniel were allegedly involved in defrauding several victims through an alleged business scam. JNET is made up of members from multiple law enforcement agencies. JNET was involved in the investigation because the brothers were allegedly distributing Adderall to others without a prescription. Of note, a family member of Sheriff Snaza is engaged to Daniel Nelson. Additionally, Snaza's department initially refused to investigate the criminal actions of fraud until it was brought to the Lewis County Prosecutor's Office.

JNET was asked to investigate the distribution of Adderall by the Nelson brothers. Adderall is an amphetamine used to treat ADHD and causes a "pick me up" effect. During the JNET investigation, it was determined the Nelson brothers obtained large cash loans by defrauding individuals in Lewis County. The Lewis County Sheriff's Office was notified by the victims of the alleged fraud. Shortly thereafter the Sheriff's department closed the case stating "Lack of criminal evidence." Of note, the standard operating procedure when it involves a family member is to assign the investigation to an outside agency. One of the fraud victims posted on Facebook of their discontent with the sheriff's office's lack of investigation. That led to that victim contacting the Lewis County Prosecutor's office. The Lewis County Prosecutor's Office has charged Robert Nelson, but Daniel Nelson has not been charged, even though he was involved in the business at the time that the fraudulent loans were obtained.

The following is some of the information included in the 8 page JNET investigation.

The initial investigation was closed by Lewis County Deputy Sheriff Yocom but Detective Haggerty stated in his report, "While reviewing Robert Nelson's involvements, I saw that he had two recent calls in which he was a suspect. In reading the report where the victims were involved, I saw that Deputy Yocom's last sentence read "Due to the lack of criminal evidence, I request this case be cleared as informational only." This report was completed on July 29.

The victims had $150,000 stolen from them by fraudulent means. The victims recently posted on their facebook page stating, "We are disappointed in the very delayed actions of our local sheriff's office and in the ENTIRE Nelson family." The victims had to go through unnecessary hardship to get this case prosecuted.
JNET interviewed several people, at one point being directed to talk to a local business person. Per Haggerty's report, he continued, "While waiting for their drink, Robert Nelson offered them Adderall as a 'pick me up.' This person refused the Adderall, but Robert's brother Daniel later brought the Adderall to their business and again tried giving them the pills. This person again refused to take them."

At one point during the investigation, Detective Haggerty spoke to an individual who gave Daniel Nelson a ride to Sheriff Snaza's home, the report reads, "The witness said that on the day before this trip, she was asked by Daniel to drive him to his fiancée's family's house and drop him off. The witness said that upon their arrival, Daniel grabbed a Chase bank bag from his Jeep and removed a large amount of money from it. The witness told us that Daniel gets money from Robert for doing nothing. The witness also said that Robert paid for the engagement ring that Daniel gave his fiancée during their Disneyland trip."

The victim who had the $150,000 fraudulently stolen has since won a judgment in civil court. Of note, Daniel Nelson's name appeared on the business until the investigation began, then his name was removed.

The entire investigation can be viewed on the Lewis County News Facebook page and also on www.hometowndebate.com.

The Lewis County News has also been informed that there are potential additional victims.

The Lewis County News reached out to Sheriff Snaza for a quote and has received no response at the time of this printing.