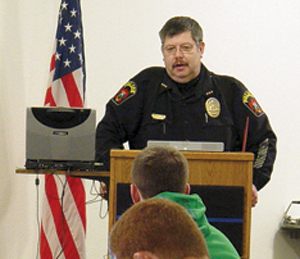 Academy Commander Terry Williams (background), chief of police of Winlock, introduces the basic expectations and policies of the 2013 Police Reserve Academy, which began in Winlock Thursday.

The 2013 Police Reserve Academy is under way in Winlock with 17 hopeful cadets facing five months of intense instruction and training.

Led by Academy Commander Terry Williams, chief of police of Winlock, this academy will mark the first organized by Williams since graduating 16 reservists in 2010, many of whom went on to obtain careers as officers, deputies and jail staff.

"The academy and the instructors take credit for all the good stuff," said Williams of fellow law enforcement professionals who help lead courses, including Officer Sam Patrick of Toledo PD, Chief Dan Mortensen of Morton PD and Deputy Chris Rubin of the Lewis County Sheriff’s Office.

This year, cadets have been sent by departments throughout and around Lewis County, including Winlock, Morton, Centralia, Tenino and the Lewis County Sheriff’s Office.

One cadet who has already made his career within the criminal justice system, but wanted to learn more about why cops do that they do, is Lewis County Prosecutor Jonathan Meyer, who said he enrolled in the academy to better understand the practices and procedures of law enforcement.

"I want to better know
what the officers go through," said Meyer, stating he feels prepared for the rigors of the academy as he has seen some of the darker and more challenging elements of law enforcement as a private criminal defense attorney. "I’m willing to do whatever it takes."

And the challenges facing cadets are not as simple as hitting the books. They will be learning firearms safety and training, emergency vehicle operations and will acquire first-hand experience being tazered and pepper sprayed during a session colloquially known as "Hell Day."

But whether getting peppered sprayed in the face or tazered to the floor, cadets are expected to take their training as seriously as if they were planning to become full-time law enforcement, as the dangers a reserve faces are no different than the dangers faced by a commissioned police officer.

"We all bleed the same," said Williams, stating cohesion and teamwork will be major themes repeated throughout the academy.

Between now and June, cadets are expected to complete 260 hours of instruction before taking a state-proctored test to complete the academy. Afterward, graduates will return to their respective law enforcement entities and be depended upon to lend a hand when help is needed.

When asked how many out of 17 cadets are expected to graduate, Williams said all of them, as allowing one to fail would defeat the purpose of learning to work as a team.

To see pictures and video of training from the 2010 academy, or to find out how to support current cadets, visit www.winlockpolice.com or contact WPD at (360) 785-3891. 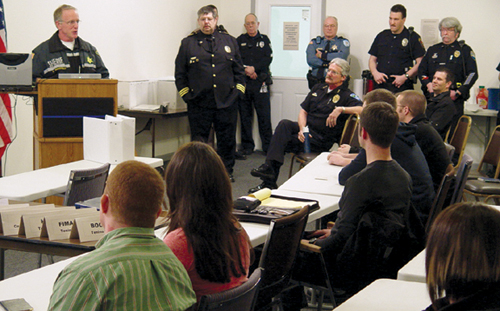 Lewis County Sheriff’s Deputy Steve Mansfield (far left) speaks to cadets and relatives during an open house Feb. 4 attended by family members and local law enforcement leaders. Mansfield said the area is in need of well-trained volunteers and encouraged cadets to see their training through. 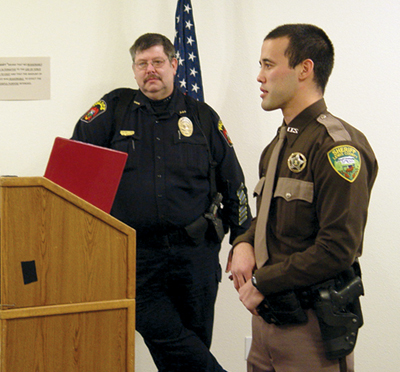 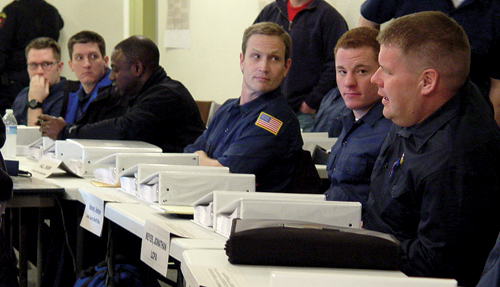 Lewis County Prosecutor Jonathan Meyer (far right) among fellow cadets during the first day of instruction. Meyer said he joined the academy to better understand the members of law enforcement he works with and is willing to do “whatever it takes” to complete the training, including getting pepper-sprayed and tazered. 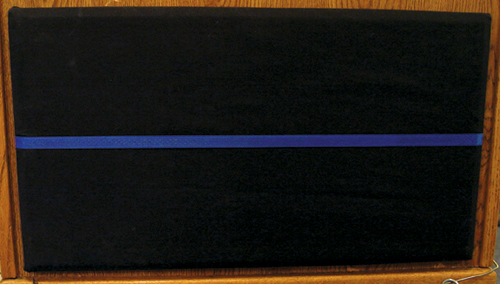 The Thin Blue Line, symbolic of the brotherhood of law enforcement, adorns the lectern at the academy. Williams said officers, deputies and troopers may wear uniforms of differing colors, but they still “bleed the same” and should enforce the law with unity and cohesion.