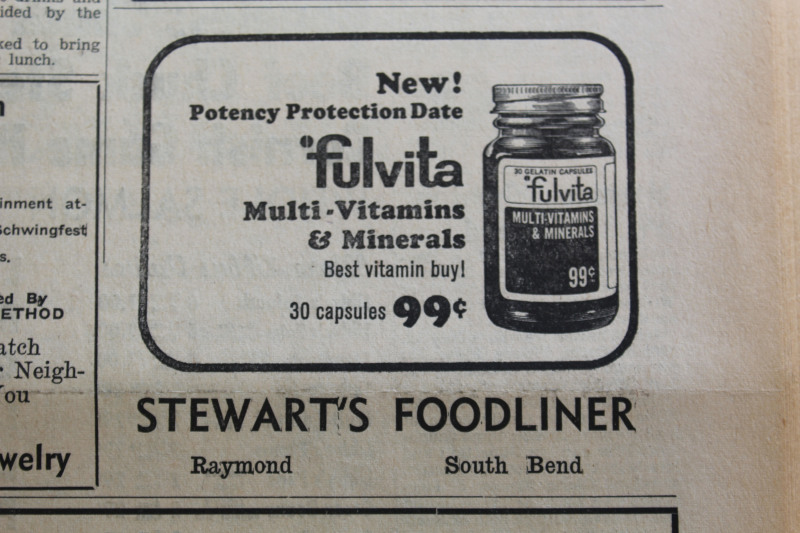 Advertisement from the Raymond Advertiser circa 1965 from Stewart's Foodliner, a store local to Raymond and South Bend.

Editor Edwin M. Connor of the Pilot fell under the displeasure of Judge Wright last Monday morning, and when court opened Prosecuting Attorney O'Phelan was directed to file contempt proceedings against Mr. Connor because of an article bearing on the North River trouble which appeared in the last issue of the Pilot.

This action of Judge Wright has only intensified the feeling which already existed in the county as a result of the North River cases, and feeling in South Bend is decidedly in favor of Mr. Connor, and several prominent business men have signified their intentions to go to Mr. Connor's financial assistance should it be necessary as a result of the contempt proceedings, although opinion is unanimous that there is nothing wrong with the article in question, and that Judge Wright's action will result only in a few more costs for the wear tax payer.

Among the Elks who arrived today for the convention, which happens next Tuesday was J.T. Hayes, past exalted ruler of the lodge at Nonwich, Connecticut, who walked 1,100 miles from Raymond, Washington.

"It was a pleasant stroll," said Hayes, as he strode into a hotel carrying a heavy staff. "I started May 4, and averaged about 20 miles per walking day."

A stupid act of vandalism over the weekend in Raymond will cost the city about $75 and runs considerable risk of not having water for a fire when needed.

Somebody with more time on their hands than brains in their heads removed the pumper caps from ten of the hydrants in the downtown area. The caps were valued at about $75, but the worst part of the whole situation is that it will take about two months to get replacements. In the meantime the exposed valves could become jammed with debris and be useless when needed for fighting fire. City Engineer Jack Jorgeson is riggin temporary covers.

The Weyerhaeuser Company has offered the Raymond chamber of commerce a 12 foot in diameter fir log for display in the city, but nobody knows where to put it.

Chamber members naturally wished to put it on a main line of travel for visitor to view, but in a location where it will not obstruct the vision of motorists and cause an accident.

Eleven girls from Japan to be here.

For the third year, area families will host Japanese students for nearly a month under a cultural exchange program. The 11 students, all 15 to 17 year old girls from the city of Kyoto, will arrive Thursday, said Char Robley, teacher/coordinator for the stay, sponsored by the Cultural Home Stay Institute.

The public is invited to a welcoming party for the students on Sunday, July 22 at 7pm at St. Lawrence Catholic Church. It is a snack/dessert potluck, with square dancing.

Bennett, who was in the Weyerhaeuser bus incurred neck injuries, he said Monday.

Raymond officials, who last year tried to get a work camp here, did not respond to a letter from the state soliciting interest in a prison.

Read more from:
WHH - Glance at the Past
Tags:
gap
Share: