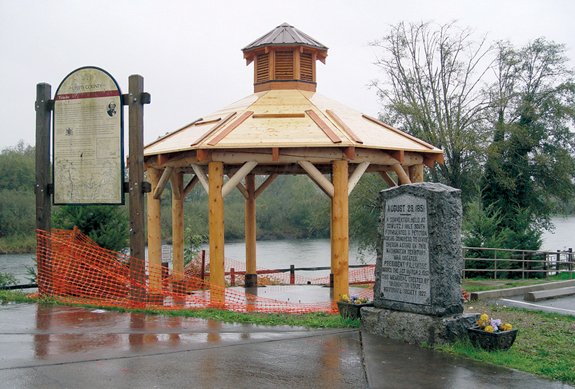 A recently-installed gazebo at the boat launch in Toledo, built by Frontier Log and Timber Homes, of Shelton. The structure had been commissioned by Toledo back in June and is being paid for by a grant from Tacoma Power.

A much-anticipated gazebo was assembled over the weekend at the Toledo boat launch with officials expecting to hold a grand opening as soon as the weather improves.

The 18' x 18' log structure had been engineered and pre-fabricated by Frontier Log and Timber Homes, of Shelton, after the city commissioned the project in June. The cost of the gazebo ($14,000) had been covered by a $67,000 grant awarded to the city last year by Tacoma Power for improvements to public facilities along the Upper Cowlitz River.

Other projects undertaken with the grant include automatically-locking doorknobs for the bathroom facilities, at $2,600 from Ohio-based Go Keyless, and wireless surveillance cameras, at $3,167 from Toledo Tel. In recent council meetings, the Police Department has reported they are already making use of the cameras to document and respond offences, as they are able to view live feeds from City Hall or from their police cruisers, and it is the hope of officials the presence of cameras will reduce the level of vandalism and theft taking place at the boat launch, both to public and private property.

Other projects proposed for the remaining $47,000 in grant money include large mooring rocks along the shore with hooks for watercraft to hold on to and park, as well as a kiosk with signs educating residents about boating and water safety. City Clerk Michelle Whitten has reported Frontier Log and Timber Homes heard of Toledo's desire for a life vest station among additional projects and has offered to build and install one for free along with the gazebo.