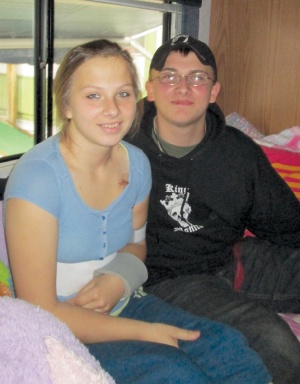 Quietly nestled in a spotless motor home in Toledo, the Swanson family invited me into their living room for an interview a couple weeks ago. Outside, dozens of flowers and a giant “Welcome Home” banner were visible through the rain. But nobody minded the weather.

Back on May 8, just one month and six days after 16-year-old Forrest Swanson helped rescue a toddler from Wallace Pond while on an outing with his sister, he awoke to “a loud thump” around 5:15 a.m. while he and sister Sequoia Swanson were staying with relatives in Vernonia, Ore.

He said he hurried to his sister’s room and found her lying motionless on the floor, unresponsive. He sprang into action, shouting for someone to call 911 while he began CPR. Fog slowed the arrival of local emergency responders while he and another family member worked to resuscitate Sequoia.

The medics credited the family's efforts with saving the young woman’s life, as she had to be revived four times during the morning. Her condition was identified as LQTS, or Long QT Syndrome, a rare heart condition involving a delayed or re-polarized heartbeat.

Sequoia was calm as her brother and mother filled in the details of the weeks-long hospital stays, to which Sequoia admits recalling almost nothing except her transfer from one facility to another via ambulance. “Even that was hazy,” she said.

Extended family from all over the country came to their aid, despite never having been a close-knit clan before this event. The motor home was loaned by a niece, as Sequoia’s recovery requires a nearly-sterile environment. Her mother, Beverly Swanson, also thanked the people of Toledo for all their support.

“Even people I didn't know would come up to me at the IGA, ask if I was Sequoia’s mom, and hand me gifts,” she said. “What a tremendous community!”

She said the focus is now on the future and their new home, where Sequoia’s family says they will have room for a horse, promised to her if she pulled through.

Emergency surgery left a 4-inch scar below her left collarbone, which she made no move to hide. Friends and well-wishers need to know that recovery is expected to be slow with her condition remaining frail. No hugs, shoving, or horseplay.

Despite Sequoia’s lack of recollection about the events following her collapse, she was “crystal-clear” about one memory.

“I saw my Grandma,” she explained, describing calmly and in detail her visit with her grandmother, who had passed last September. Their close bond left Sequoia bereft and grieving right up to her collapse on that morning. She says she is at peace now, reassured that her beloved Grandma is in a better place.

“But you have to go back now,” she distinctly recalls being told. “It’s not your time yet.” 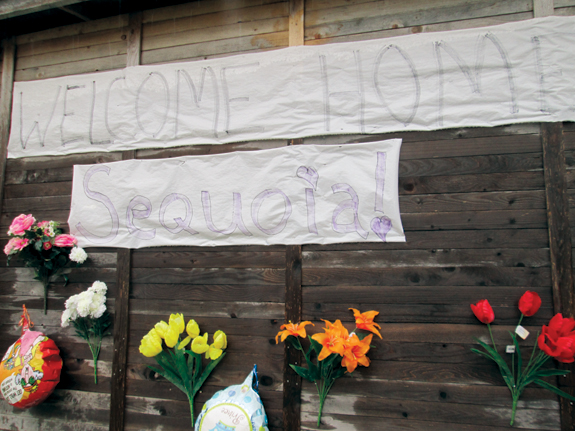 A “Welcome Home” sign for Sequoia Swanson left by well-wishers outside her home. Her family has said they are very appreciative of the outpouring of support they have encountered from local residents.