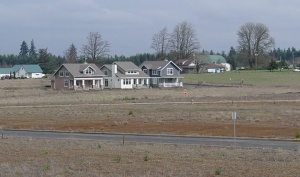 Grand Prairie Mountain View Estates, in Winlock, has only seen three out of 200 planned lots developed since the recession began in 2008.

The housing market in South Lewis County is headed for an upturn this summer as developers are preparing to pick up where they left off after the recession began in 2008.

Multiple subdivisions have been left unfinished after real estate investors defaulted or abandoned their projects, but a new lineup of developers has been taking steps to restart the home construction process.

"I’m getting calls weekly from developers and investors and builders who want to build," said land use consultant Eric Eisemann to the Winlock City Council March 11.

Eisemann, of E2 Land Use Planning Services, has been helping developers continue the construction of Grand Prairie Mountain View Estates in Winlock, just off SR 505, and spoke with the council that night to ask for a plat extension.

"This is a project that got stalled out for a lot of reasons and it’s ready to take off again," said Eisemann of the five-acre, 200-lot subdivision. "The infrastructure’s been built. It just hasn’t been final-platted and we need the extension in order to make things happen."

(For those unfamiliar, a plat is a map showing the lots and roadways planned for an undeveloped parcel of land and must be approved by a governing body prior to the start of construction.)

While a normal plat is valid for only five years, legislators in Olympia passed a law in March, 2012, allowing plats for subdivisions to be extended to nine years, provided they are within city limits, were first submitted prior to Dec. 31, 2007, and are not subject to the Shoreline Management Act. Their reasoning was to give a break to developers who were inhibited by the recession, and the extension will no longer be available after Dec. 31, 2014.

Grand Prairie Mountain View Estates matches the necessary guidelines and council members unanimously approved an extension of the plat, stating they are encouraged to hear progress is being made. Developers now have until Sept. 26, 2014, to complete the subdivision before needing to file a new preliminary plat.

Other plat extensions are being approved as well, including an extension for Rognlin Community Development by the Napavine City Council March 12, and an expected approval for Shambaugh Planned Unit Development during the March 25 Winlock City Council meeting.

If additional residents were to move into the Winlock and Napavine areas, it would ease the burden of increasing utility rates, particularly in Winlock where water and sewer rates are the highest in Lewis County, though such reductions would need to come by action of the city councils.