Indians chop down the Loggers 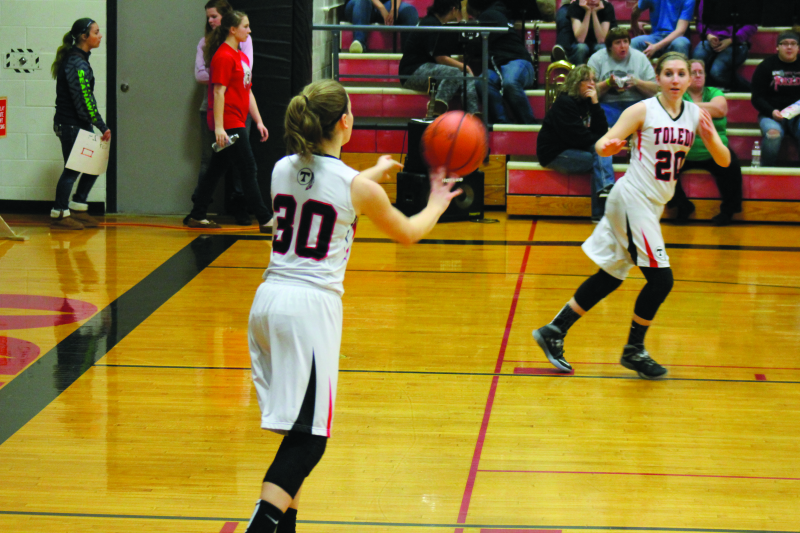 Anna Tauscher looks for a pass from Haley Tauscher.

On the night of January 26 the Toledo Indians Girls Basketball team took to the court against the Onalaska Loggers.

Right from the start the Indians took control of the game. "We got off to an amazing start with a 19-4 lead. Anna Tauscher had 10 points in the first quarter including a 3 pointer at the buzzer." Head Coach JB Ewers said.

As the game continued the Loggers began to crawl out from underneath. In the Second quarter, "Onalaska made a great adjustment to their defense which caused us problems offensively, third quarter Onalaska slowly kept getting closer, chipping away at the lead" and the "fourth quarter was back and forth with each team trading the lead."

When the game itself wasn't enough of a nail biter, the girls went into overtime where "Haley Tauscher had a huge offensive rebound and 2 point put back to tie the game at 37-37. Our defense held strong and Ally Bacon collected the rebound with 2.3 seconds left and she was fouled. Ally made the free throw to give us a 38-37 lead and the clock ran out for the win."

Following the amazing victory, Coach Ewers gave his comment, "Overall I thought we played well at the beginning and the end of the game. The middle of the game we had too many turnovers and missed shots. I was very happy with how the girls responded to a stressful situation. They kept their composure and Ally came through under intense pressure."

The girls played again on February 2nd, against Wahkiakum in Wahkiakum.