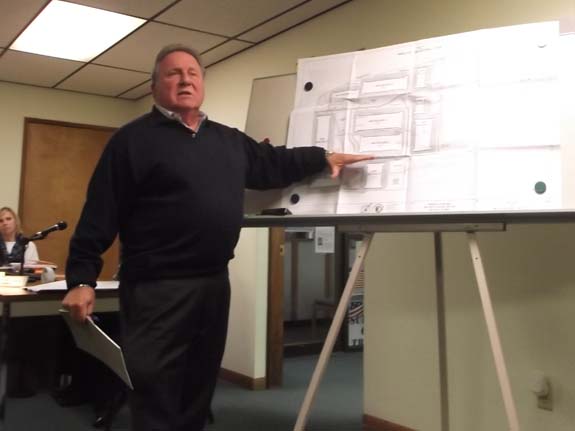 Joe Alhahdeff, of developer Benaroya, indicates details of his company’s preliminary plat to develop the Winlock Industrial Park along I-5. A large crowd of residents attended the meeting, who hope development of the property would be a boon to the city

Standing room only in City Hall brought developer Benaroya, engineering firm Barghausen, and commercial real estate marketer CBRE, Inc. face to face with citizens during a hearing of the Winlock Planning Commission Oct. 16 in which plans were discussed to develop 322 acres of industrial property along I-5.

Dan Balmelli of Barghausen confirmed "The State Environmental Policy Act (SEPA) has been completed, and we're ready to move forward."

Barghausen has previously had experience fulfilling such state obligations through developing industrial parks in Green River Valley for a number of decades and were seen as qualified to assist with the proposal.

CBRE representative Brett Hartzell, on hand to answer questions, spoke little as Joe Alhahdeff, spokesman for Benaroya, dominated the gathering. He portrayed a vision of prosperity to be realized by attracting new business and manufacturing to their proposed industrial park.

"Whether tenants or buyers, we will build to their needs," he explained. "Winlock is the half-way point between Portland and Seattle, major rail and water ports. That's the draw."

It was also reported Winlock is exploring grants to bring sewer utilities to the site, an unusual move as developers are generally responsible for installing utilities and road improvements as part of their costs to build. Winloock's gesture may be one reason for Benaroya's decision to establish their industrial park here.

Located far above the flood plain, and with easy freeway access, Benaroya's "if you build it, they will come" speech generated optimism in a town where boarded shop windows have been sprouting like weeds.