It's all fluid in River City 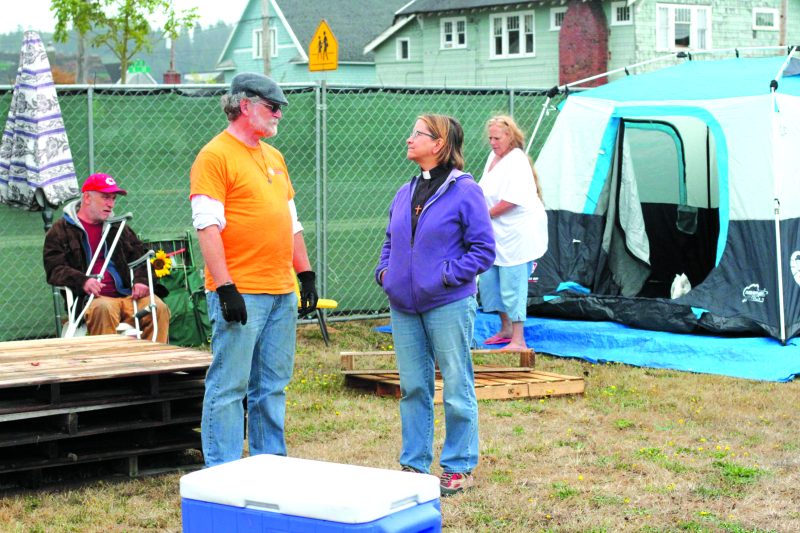 Pastor Val Metropoulos of Amazing Grace Lutheran looks on with another volunteer, as the new River City is erected.

The "River City" homeless camp has had to move locations not once, but twice since the City of Aberdeen has given them an eviction notice to clear out of the area that the homeless occupied next to the Chehalis River. First the camp went from the private property on the side of the Chehalis River to the Amazing Grace Church in Aberdeen. They were allowed to stay for 90 days, due to the Revised Code of Washington 36.01.290, which states; "a religious organization may host temporary encampments for the homeless on property owned or controlled by the religious organization whether within buildings on the property or elsewhere on the property outside of buildings."

Now that the 90 days is over for the Amazing Grace Church, the First Presbyterian Church has stepped up to be the new host for the camp, as of August 31.

Jeani Shofner, Lay Pastor of the First Presbyterian Church in Hoquiam, explains how her church came to be the one to receive the River City camp on their journey from the Chehalis River site.

"We have been acquainted with the Amazing Grace Church, and we saw that nobody was stepping up to receive the camp, and it was our elders who suggested that maybe we could take the camp," said Shofner. Shofner went on to explain that they wanted to hold a meeting with Amazing Grace Lutheran Church before they made any decisions, "we thought about it, and decided to call a meeting with the Amazing Grace Church, and other churches and find out how the camp worked and what it was like to host it, and what we can expect if we do decide to host it." Shofner explained that there was only a little bit of discord among the congregation at the First Presbyterian Church due to the decision to host the camp.

"Of course this had repercussions as one of the members of our congregation had a problem and thought we should have asked the congregation first, and some members of the community have been upset, but there is an RCW for this, and I am not doing anything illegal," said Shofner.

Shofner explained that she hopes that the upsetting of the community around the church can raise awareness that there is a problem with homelessness, and that it needs to be addressed so that no church or community need be worried about hosting those in need of help.

The encampment at the First Presbyterian Church in Hoquiam had a chain link fence around the perimeter of the camp, and volunteers from churches in Seattle, Portland and Tacoma were all helping to move materials into the camp. Shelly Fayette, one of the volunteers from Seattle spoke on the issue.

"The goal here is to get all of the residents at this camp into permanent housing, and it's great because this particular camp is now starting to gain some publicity, it's starting to be seen and the more publicity the camp gets the more residents are able to find housing."

"Though all the organizations didn't necessarily see eye-to-eye on the approach on how to take care of this problem, we still came together to form the camp and it has been a positive experience and we are able to help with the camp."

Homelessness is not specific to Grays Harbor and is hard to gauge as to the exact amount of individuals or families who are impacted. Other communities in the state are dealing with similar situations like homeless camps and it has taken years to find a more permanent solution witnessing camps hosted by groups floating for many years before a more viable solution is found.