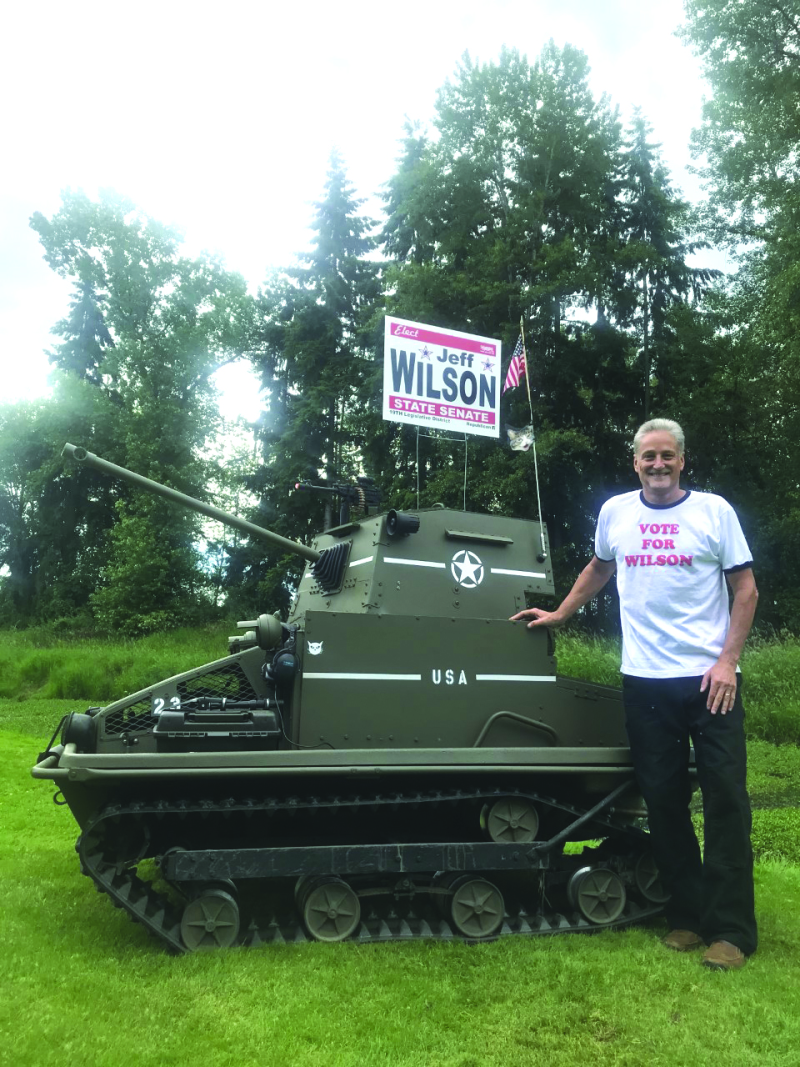 Jeff Wilson with his mini-tank

On May 12, 2020 Jeff Wilson, Longview Port Commissioner announced his run for Washington State Senate in the 19th District. Jeff has been active in the Longview area for quite some time and now he would like to represent the entire 19th district.

One of the reasons Jeff decided to run is because he feels rural communities are subject to big city policies, "Recently we have seen our rural communities surrender control to Seattle style politics. Out of control spending and disrespecting the will of the voter seems all too common with the majority rule in Olympia. Restoring people's trust in State government is a monumental task, a task I choose to take on full force when elected. Intentional ghost bills remove the right of representation and accountability to the people and need to be addressed with legislation that will respect the process to the citizens."

Jeff continued, "My campaign is about restoring some faith and trust in our state government, and ensuring a healthy economy that allows success instead of placing roadblocks for political purposes. The past years the rural communities have been left out of the bustling economy that the Seattle area has enjoyed, a clear sign that we need a voice to bring back success to our local communities. As a Port Commissioner, I have kept my promises to reduce taxes and fees, and operate as a financially transparent public business."

Jeff has been reducing taxes at the Port of Longview and he will continue to do so in the 19th district, he stated, "Olympia has maxed out our taxpayer credit with the introduction of fees and taxes compliments of the current Democratic leadership, and will continue to do so unless the balance of power is stabilized in our Senate. Simply put, Olympia must go into damage control after years of placing additional taxes and fees on taxpayers. I will be a roadblock to the attitude of Olympia taxing its way out of problems. Ask yourself, are you satisfied with the past four years? Do you trust our current leadership to represent the 19th district effectively?"

Jim Walsh, Washington State Representative for the 19th District has known Jeff and his work. "I've known Jeff Wilson for years," said Walsh. "He's been very effective as a Port Commissioner and I expect he'll be effective in Olympia. The main thing to know about Wilson is that he's a fiscal hawk. Port districts have taxing authority - and some run those up as high as the law allows. But in his time as a Commissioner, Wilson has focused on cutting taxes. On running his Port at a profit, so that it's a working asset for the people. Not a cost to them."

Jeff Wilson is coming to Pacific County, he will be doing what he calls a "Whistle Stop" tour he stated "Beginning the week of June 15, I will begin our 'whistle Stop' tour ....where we take our miniature WWII tank to put on display in the towns located within the 19th district."

When you see the miniature tank, stop and take a minute to talk to Jeff, he will be more than glad to share his thoughts and ideas for the 19th district with you.