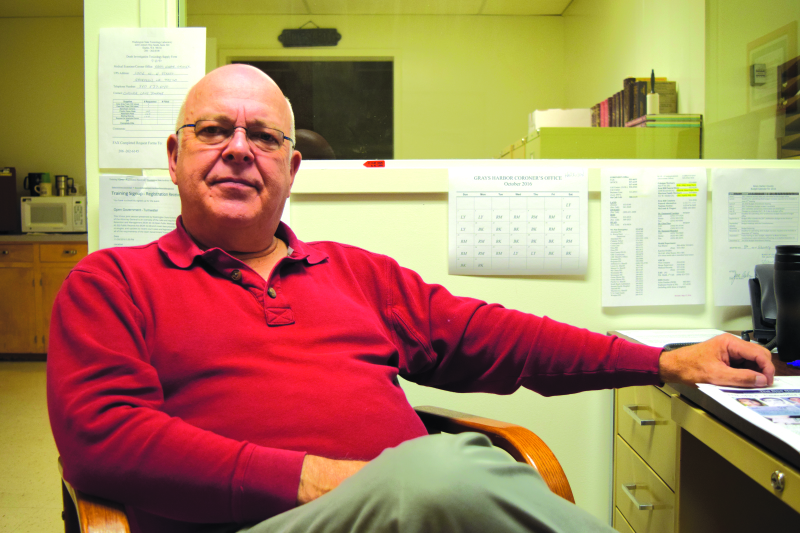 Grays Harbor County Coroner Lane Youmans has been involved with the Stevik case since 2001 when he was a detective with the sheriff's office.

The case of a young man who checked into an Amanda Park motel in the uncertain days following 9/11, only to be found later to have committed suicide by motel staff, has captured the interest of amateur internet detectives who seek to help law enforcement finally solve the now 15-year-old investigation.

The Herald was recently contacted by Jess Tonry of faraway Maine, who described herself as just one of five moderators of a forum dedicated to the case on the popular internet site reddit. Tonry indicated that the reddit group with which she is involved has grown to 1,193 members, but is only one of several sites where internet sleuths discuss facts and theories about the case.

Tonry stated she believes interest has shifted to the unidentified man, who checked into the Lake Quinault Inn in Amanda Park on Sept. 14, 2001 under the probably assumed name of Lyle Stevik before being found dead from hanging on Sept. 17, now that several other high-profile Doe cases across the nation have been recently solved.

Grays Harbor County Coroner Lane Youmans, who was a detective with the sheriff's department at the time of Stevik's death, has been involved with the case since the beginning. He said he tries to keep up with the theories being bandied about on the internet.

"They have come up with some good questions, some avenues for me to explore," Youmans said of the armchair internet detectives. "Some weren't helpful, but at least they're trying. I've read all the blogs. It's one of those cases that I would love to solve. It's been very perplexing as to why we haven't been able to identify this gentleman after all these years."

"We've done everything we could to try to identify him and have come up empty," Youmans continued.

One of the theories proposed, which Youmans has since discounted, is that Stevik was somehow involved in the 9/11 hijackings. Youmans said he has brought the case to the FBI's attention and there is nothing to indicate that such might be the case. However, Youmans speculated that it's possible that the events of that day might have figured into Stevik's decision to end his life.

Among the case's oddities is that Stevik had few distinguishing features that might positively identify him. Tonry described Stevik as a "healthy, attractive, seemingly well-off young man," a description similar to those put forward by many others interested in the case, yet his origins and background remain otherwise entirely uncertain.

Youmans noted Stevik's unclear race and ethnicity, saying experts he's spoken with have suggested that certain of Stevik's facial characteristics are consistent with those found among persons of European, Native American or Middle Eastern decent. A motel staff member who encountered Stevik thought he might have spoken with a slight Canadian accent. He was probably aged between 20-30, had no tattoos, and his only scar was from an appendectomy.

Neither is there any indication of drug use, alcohol use, criminal history, or disease.

"His teeth were in near perfect condition, suggesting orthodontic work at one point," Youmans observed, adding that DNA and fingerprint searches have not returned results.

Stevik's body was exhumed early this year for isotope testing, which can give some indication of where a person has lived during the course of his or her life, but Youmans said the results were far too broad to narrow the search significantly.

Neither do Stevik's few possessions shed any significant light onto his background.

"His clothing suggested he wasn't a transient," stated Youmans. "But he checked in with no luggage ... just a toothbrush and toothpaste."

What Stevik's clothing does suggest, however, is that he'd lost a lot of weight. Youmans noted that Stevik had gone through all the holes on his belt; they were all worn and he was on the tightest one.

When Stevik checked into the motel, he gave an address that turned out to be that of another motel in Meridian, Idaho, though no one there has claimed any knowledge of him.

At the Lake Quinalt Inn, Stevik was not remiss in ensuring everything had been paid for, leaving ample cash along with note that read simply "for the room."

Youmans said in his nearly four decades of involvement in law enforcement and work as a coroner it's not something he's encountered.

"He took care of his bill. It blows my mind. I've never had anything like this where someone was so thoughtful that he'd paid for the extra days he stayed there," said Youmans.

The case's strangeness doesn't end there, however. The name Lyle Stevik may be a somewhat obscure literary reference to a Joyce Carol Oates novel titled "You Must Remember This," in which a character by that name contemplates suicide.

As it is, Youmans said he's convinced the Stevik name is not the John Doe's real one, having run it through various databases to no avail.

"There's just a lot of little facets of this case," Youmans went on. "In the garbage can there was a little piece of paper with the word 'suicide' written on it. I don't know if he had planned on posting that on the door or he was trying to see how suicide is spelled and he wrote a letter to someone. I don't know. It's just really perplexing."

Stevik changed rooms at the motel once prior to his death, complaining of noise from a nearby trailer park. He was also seen by witnesses walking along a nearby road, Youmans mentioned, apparently in a state of brooding.

"You'd like to find out who he is," said Youmans, who has devoted much of his free time to trying to solve the mystery of Lyle Stevik. "In a way he's thrown down the gauntlet. He didn't want to be found, and I don't like that. I guess it's just personal."

"They want to try to identify this guy," Youmans continued of the interest shown by the web's amateur detectives. "They feel like I do. He's got to have family. He's got to have somebody out there ... He's up in an unmarked grave at Fern Hill Cemetery. His family needs to know what happened to him."

The reddit forum dedicated to Stevik can be found at https://www.reddit.com/r/lylestevik/. Digital reconstructions and artistic renderings of Stevik along with other information can be found on The Doe Network under the heading 233UMWA - Unidentified Male.