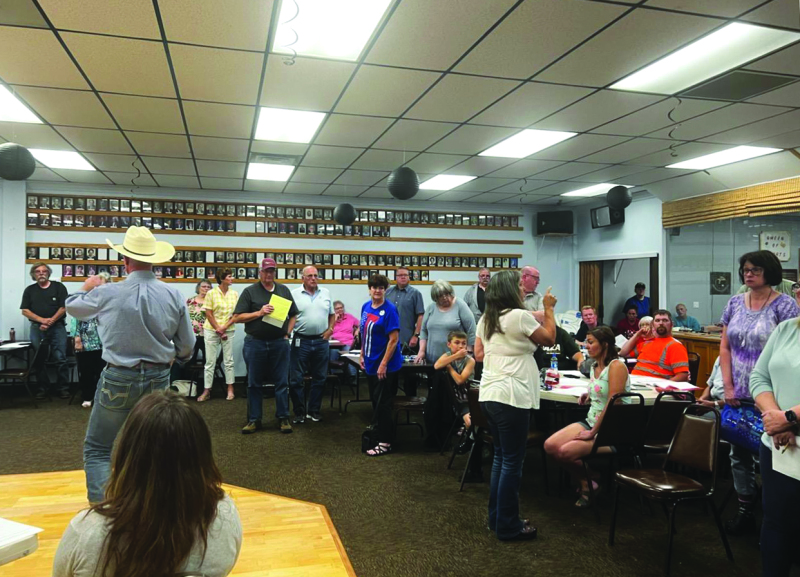 The Lewis County Republican Party gathered at the Chehalis Eagles on Monday, July 11.

On Monday, July 11 at 6:00 p.m., the Lewis County Republican Party gathered at the Chehalis Eagles regarding Chairman Brandon Svenson and a possible vote to recall him. Svenson was a no show, not informing the board he would not be attending. Since Chairman Svenson was not at the meeting, a vote to recall him could not take place per their bylaws.

On Monday evening, the LCRP Executive Board had decided to close the meeting to the public due to several past outbursts by the supporters of Chairman Svenson. The board allowed the PCOs, vote counters and the media in the voting room. Eventually, the board decided to allow the public in with the understanding that no outburst would be allowed.

Jeanne Hall, Treasurer of the Lewis County Republican Party and member of the Executive Board stated, "Svenson's responses listed in the Chronicle are interesting. Per the bylaws of the Lewis County Republican Party he is supposed to be Chair. It does not allow him to publicly promote or endorse any Candidate. Yet, he justifies his negative behavior by saying he was standing up for the people of Lewis County by showing them that Murphy had been supported by Lewis County Democrats and other organizations on what Svenson called 'the left.'" The Lewis County News did verify that Candidate Murphy is recorded with the Washington Secretary of State in 2020 as voting Republican, a lie that Svenson has continued to perpetuate.

Chairman Svenson stated he did not receive a copy of the letter requesting his presence at the meeting. Jeanne Hall, Treasurer, stated, "He was indeed sent the letter with detailed charges. It is possible he did not read it, but receiving it should not be a question." It is suspected that he knew about the meeting since all of his supporters were there.

Hall continued, "As Svenson has devised a job and position different from the Chairmanship, he really should step down and let someone take on the job of Chair who wants to do that job - not some other."

The following is the remaining statement by Treasurer Jeanne Hall:

There appears to be a misaddressing about the July 11 of the Republican Central Committee. The four Board Members did not issue a call for the Central Committee to meet out of the blue, that call for a meeting was undertaken only AFTER Chairman Svenson had been asked to call that meeting.
Chairman Svenson was handed a letter requesting that he call a meeting of the Central Committee to discuss and resolve the issue of his resignation on June 5, 2022. He did not. This left the matter to the four requesting Board Members to resolve. As stated in the letter, he absolutely DID receive, if he did not call a meeting the requesting members would.

There seems to have developed an idea that Brandon's antics, views and behavior are the cause of the request for him to resign. While onerous, his antics are his choice. The problem lies in his refusal to fulfill the duties of the position to which he was elected.
There are specific responsibilities and obligations the Chair of the County Party is expected to fulfill. These are detailed in the organizational bylaws - available to anyone on our website.

There is a prohibition against any member of the executive board using their position to publicly promote or endorse any candidate for partisan elected position during the primary or general elections among other bylaws.

Despite repeated attempts to mentor or discuss adherence to the organizational bylaws and repeated meetings, both private and public, Chairman Svenson has continued to be in violation of these bylaws which he is charged with implementing and following. Our first official meeting occurred nearly one and a half years ago. At that time his response was basically "sorry, I will do better", which has been given repeatedly and is still being given in the Chronicle article.

Chairman Svenson has been repeatedly asked to follow the organizational bylaws or step down and do as he will as a private citizen and general member of the organization.

This matter has been handled internally by the Executive Board in an attempt to resolve it quietly without embarrassing Chairman Svenson. Failing resolution, the matter has had to come to the attention of the entire Central Committee, an unfortunate occurrence, but necessary I repeat, Chairman Svenson has been asked to step down as Chairman. The reason is his refusal to do the job of the Chairman per the bylaws of the organization.

Brandon Svenson, as a public person and general party member is not beholden to the bylaws that affect the Executive Board.

The basic problem is a member of the Executive Board who refuses to do the job. As an Executive Board member, the Chairman needs to put the requirements of his position as a priority. Brandon Svenson has many times been asked to either accept his position of Chairman or step down and continue as a general party member.

As the evening began, supporters of Chairman Svenson were at the entrance of the Eagles where they were seen and heard calling several members of the Republican Party RINOs (Republicans in Name Only), other disparaging remarks and harassing people as they entered.

There were several new Precinct Committee Officers that were in the main meeting room. Joanna Aaron, who is a newer PCO was heard asking several longtime members "who the F-- are you?' She also asked Chief Operating Officer of ToledoTel Dale Merten "who the F-- are you?" This was the tone of the supporters for Chairman Svenson.

At approximately 6:00 p.m., the Editor of the Lewis County News received a text that Chairman Svenson was in Winlock, in his role as Mayor. The bylaws for the Lewis County Republicans did not have a clause where they could vote if he was not at the meeting. A vote was then taken to change the bylaws and the vote was passed by the majority.

The Lewis County Republican Board had counseled Chairman Svenson on several occasions, starting after Svenson made a disparaging sexual remark in May 2021 on Facebook about Richard Debolt, legislator Peter Abbarno and Chad Taylor. Chairman Svenson did not apologize for his actions until the article in the Chronicle this week, one year later. The counseling by the board continued from last summer until recently when it was obvious the counseling was not working. It was the position of the board to not air dirty laundry about Svenson, just as an employer does not inform the staff of a problem employee.

On October 2, 2021, Chairman Brandon Svenson was caught in a compromising situation with one of the Lewis County Young Republicans and PCO candidate Lacey Clark at the Winlock Park and Ride along I-5. They were caught by Cameron Clark, Lacey Clark's husband. This resulted in a physical altercation at which time Lacey Clark stated she had been hit as did Chairman Svenson. Chairman Svenson then pulled a gun and pointed it directly at Mr. Clark. This information was provided to the Lewis County News by Mr. Clark first, then Mrs. Clark, then a gas station attendant and finally Brandon Svenson. Shortly thereafter, Lacey Clark called both Sheriff Rob Snaza and Chief Roger Morningstar and stated she had been hit. Neither of these law enforcement officers filed a domestic violence report as is required of them by RCW 10.99.030. Mandatory reporting is required by all law enforcement officers. Failure to report is a misdemeanor as per RCW 42.20.100. The board was made aware of this situation, at which time Chairman Svenson again refused to step down. Mr. Clark has recently filed for divorce, there is no record of the Svensons filing for divorce.

Many have questioned Chairman Svenson's character, after review of his background, he has several arrests in his mid- to late-20s, one for burglary, a few assaults, drug possession and several driving on a suspended license. In 2020, Svenson was caught speeding going over 100 mph. He was not given a reckless driving ticket as is usually the case, instead a speeding ticket was issued. Per his background report, Chairman Svenson did not hold a job until he was appointed Mayor of Winlock. He owns a commercial building in Winlock and lives with his mother.