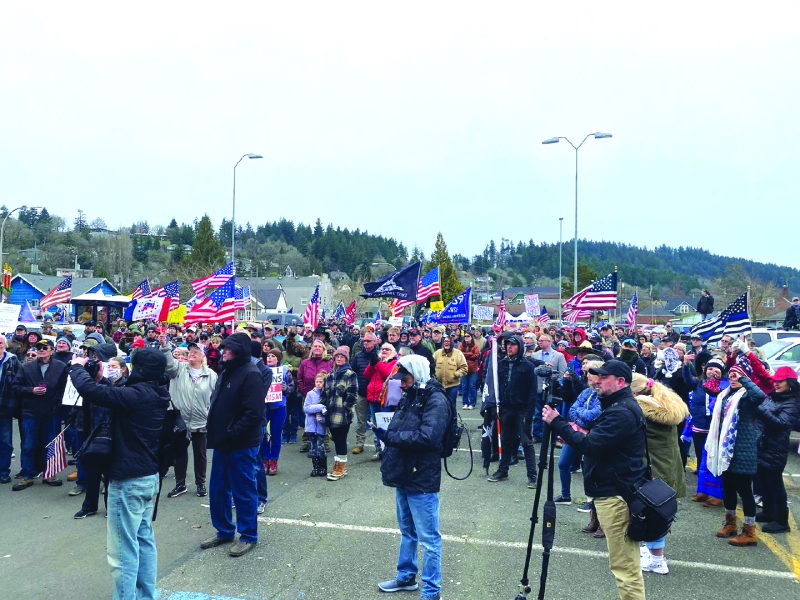 Rally at the Lewis County Law and Justice Center

The Lewis County Law and Justice Center was the place where citizens of Lewis County and visitors gathered to show their support for Spiffy's Restaurant. On Tuesday, December 29, 2020, Lewis County restaurant Spiffy's was given a continuance while Farm Boys in Maytown was slapped with Contempt of Court over being open by a Thurston County Judge.

Spiffy's story is an interesting one. First, Labor and Industries is trying to close Spiffy's so they filed a restraining order. The restraining order could not be heard by Lewis County judges because the owner of Spiffy's son Wade Samuelson is a Lewis County Judge. Therefore, the case was considered a conflict of interest for the local judges. It was then kicked up to Thurston County Judge Lanese. The interesting part is, most cases that can not be heard in Lewis County have typically gone to Pacific, not Thurston, but Labor and Industry is in Thurston, they wanted it heard there.

Marty McClendon, candidate for Lt. Governor was an incredible speaker to hear. He stated after the event, "As more and more small business owners show courage, open up and fight to protect their employees and serve the community it is incumbent upon all of us to support them, to rally around them and to step out in Faith and Courage ourselves. These issues are bigger than individual businesses, this has to do with the trampling of our Constitutional rights, unchecked power, and a threat to our way of lives. It is time that we with a loud, clear, and unified voice, say no more! and that we do everything in our power to take back this state and Nation from those who are working very hard to eradicate everything we hold dear including, freedom, liberty, our God-given rights. The time is now. My dad taught me if not you then who? and if not now then when? It is up to us."

Washington State Republican Chairman Caleb Heimlich has come to Lewis County twice. The first time, he recorded a video with local politicians to support Spiffy's, along with a video set up by the Lewis County News with Sheriff Snaza that has been viewed over 40,000 times. Heimlich stated, "It was great to join with several hundred in Lewis County to stand in support of Spiffy's restaurant. Attendees sent a loud message to the Governor that enough is enough. His lockdowns are unfair and are killing small businesses in our state. We can work to protect physical health, while also looking out for mental, emotional, and financial health. Today, the Governor further extended his draconian lockdown. The Legislature needs to rein in the Emergency Powers of the Governor, and we need an immediate re-opening plan that takes into account the regional differences in our state."

Joey Gibson, who has been constantly written about by the liberal media as a right-wing activist is actually a Christian who has been involved in what he calls a movement of "God and Country." Joey is the founder of Patriot Prayer, he started by going into areas where Antifa was but he has since stopped. His good friend, Jay, was killed in Portland this year by an Antifa member, while they were looking for Joey. Joey stated about the Lewis County rally, "An attack on one of us is an attack on all of us. There are consequences in the fight for freedom but none of us will face them alone. The people will support any business owners willing to courageously open to save this economy."

Owners of Spiffy's, Stuffy's, and Farm Boy were on hand as well. Farm Boy had just been ruled against by Judge Lanese, a fine of $2,000 a day for Contempt of Court as well as the over $9,000 per day for Labor and Industry fines.

This fight is sure to continue as more and more restaurants begin to open up against Governor Inslee's orders. Many restaurants now have outside heated tents for their customers.