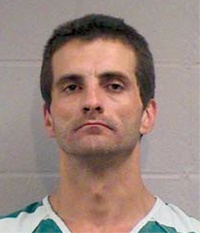 This week’s suspect is Roy J. Brown, 41, of Winlock, who is wanted by Centralia Municipal Court and Lewis County District Court on $5,600 in warrants after failing to appear for charges of fourth-degree assault/domestic violence, third-degree malicious mischief and third-degree driving while license suspended. His last known address was on the 1400 block of Ferrier Rd.

If you have information regarding the whereabouts of Brown, contact the Lewis County Sheriff’s Office at (360) 748-9286 or, to leave an anonymous tip for a possible cash reward, call Lewis County Crime Stoppers at 1-800-748-6422.

Lewis County’s Most Wanted is a publication of Town Crier in conjunction with the Lewis County Sheriff’s Office. Its purpose is to lower crime rates by educating the public about repeat offenders and wanted individuals. Those who use this information to confront, intimidate or harass suspects will be prosecuted by Lewis County.

Note: The Sheriff’s Office has since reported this warrant is no longer active.

Read more from:
TC - LC's Most Wanted
Tags:
None
Share: