Demonstrators Jessica Van Horn (left), Taryn Bowman (center) and Chris Meyer (left) join Million March Against Child Abuse Saturday in Olympia as part of national efforts that day to encourage child abuse awareness among the public. Van Horn, an elementary school teacher, said, despite progress made in raising public awareness, she is concerned the issue may remain too taboo to speak about among many groups, increasing the need for awareness efforts.

It's easy to spout off numbers, especially when they've been written down for you, but demonstrators at a recent rally in Olympia had quite a bit more to share with passers by.

Those organizing the Washington branch of Million March Against Child Abuse, held Saturday and Monday at the Capitol, could speak from their own perspective about what child abuse means, and it wasn't long before members of the public approaching the group began to share their own stories, as well.

"We just touched one more person," said organizer Ruth Crear, of Vader, after speaking with a woman who fears her granddaughter is being abused, stating the entire day has been worthwhile for just one such interaction.

Crear and Chehalis resident Chrissy Durette had organized the event as part of a nation-wide group of demonstrations that weekend hoping to raise awareness of increasing trends in child abuse and advocate for policy change. This is the third year such national efforts have been undertaken and the second year Crear and Durette organized a rally locally.

Crear said support for their movement has been growing slowly, but the need for awareness of the severity of child abuse in our country remains significant.

According to information published by the group, the United States ranks 25 out of 27 developed countries based on the annual rate of child deaths through neglect and abuse, while more than 6 million children in the US are expected to be the subject of a child abuse investigation this year, which reflects an increase of 134 percent in child abuse cases since 1980.

With such information posted, as well as signs encouraging the public to speak out for victims, a number of people stopped by to see what the demonstrators were up to, including the concerned grandmother Crear spoke to on Saturday.

She was a little unsure of herself when speaking at first, acknowledging child abuse is a serious problem and asking why the group believes it's on the rise, but barriers fell and the woman told Crear her 7-year-old granddaughter is being abused by her mother and stepfather, and the two had a long talk about what was going on.

Crear, whose own granddaughter suffered serious brain trauma after being shaken severely in 2013, said she was able to exchange contact information with the woman and intends to follow up with her, stating the situation has become very stressful as the woman's daughter has moved out of state amid attempts to stop the abuse and is currently expecting another child.

"Even as cold as I am in the rain, I could go home right now and feel like I accomplished something," said Crear after the exchange.

Another demonstrator with her own story to tell was Vancouver resident Payshance Rains, whose 2-year-old son was recently killed by his abuser. Rains, who met the group last year under similar circumstances as the grandmother Crear spoke to, returned to join the rally this year, and said, for those seeking to help the victims of child abuse, the best thing is to "be aware, be supportive, and be a voice for the people who don't have a voice."

While sharing their own experiences, demonstrators also encouraged voters to sign petitions calling for changes in the way states handle child abuse cases. One petition sought to require judges to issue annual report cards regarding decisions related to family disputes as a result of child abuse, while the other called for all states to be required to report all cases of child abuse to the National Child Abuse and Neglect Data System (NCANDS).

Durette said, currently, courts use their own criteria to forward select cases to NCANDS, stating this lack of complete information "skews the numbers dramatically" and affects the decisions of lawmakers, while also distorting the severity of the problem in the eyes of the public.

Durette said, though detailed information about child abuse may feel uncomfortable to read or discuss, the issue remains a real problem the public needs to address.

"I don't do it to make people upset," she said of informing others about specific child abuse cases. "I do it because it's real."

Other policy changes members of the group hope to push for include an education program for new parents to help them understand the potential consequences of abusive behavior toward their children.

"Maybe if some of them understand the long-term effects of what that slap does, or what that shake does," said Crear, stating solutions to child abuse need to start at the family level.

Though state lawmakers had been invited to attend the demonstration, Durette said those who did respond apologized and said they could not make it. While this was somewhat discouraging, the group said their efforts are continuing to grow one person at a time.

For more information about demonstrations such as Million March Against Child Abuse, call Lin Seahorn at (404) 474-4020, while those seeking local resources for abuse victims may contact the Human Response Network at (360) 748-6601, or seek out Healing Hearts of Lewis County on Facebook. 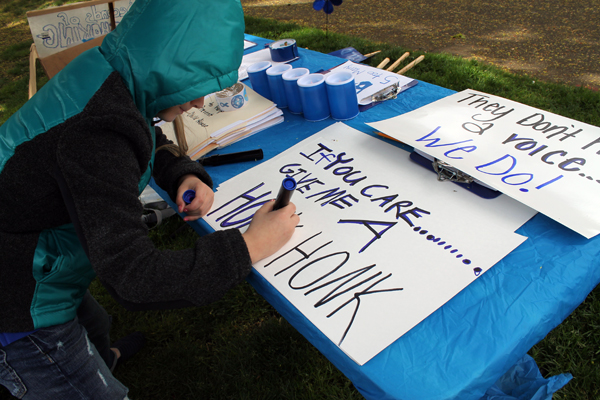 Demonstrator Courtney Meyer prepares a sign asking motorists to honk if they support their cause.