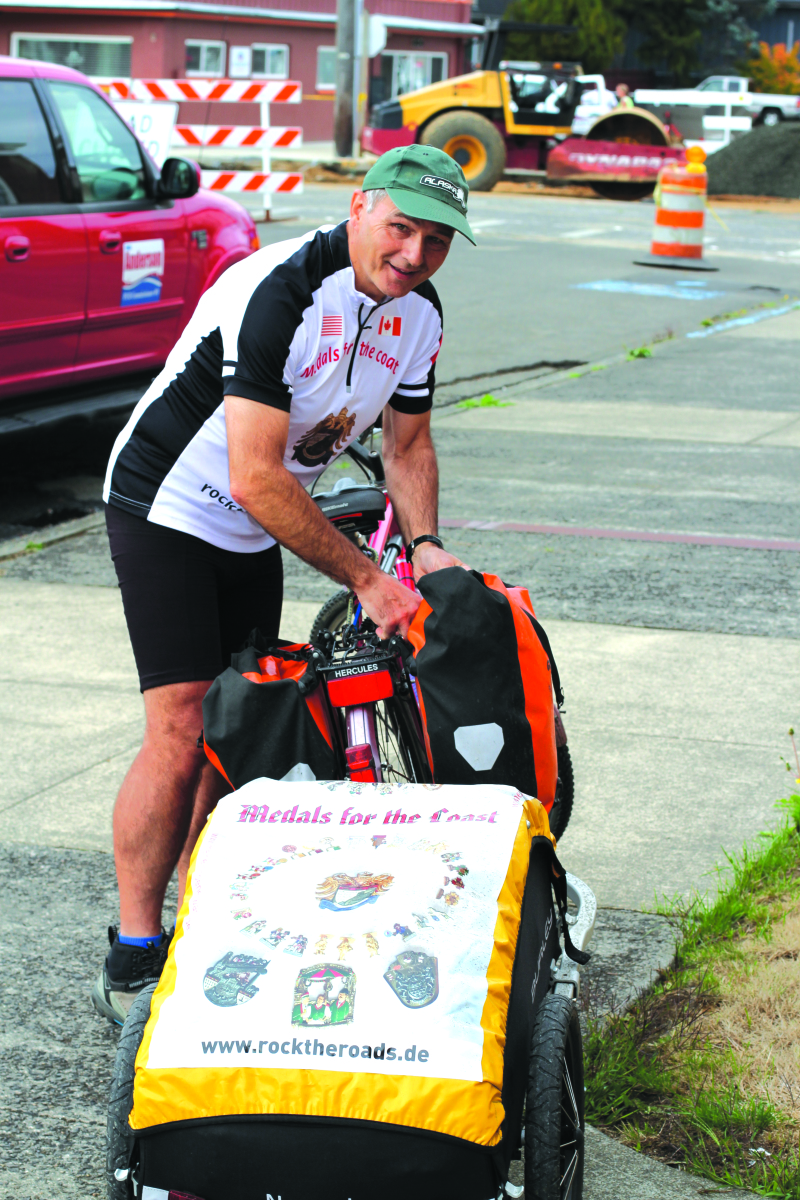 German citizen Klaus Luttgen is currently headed for San Francisco on his second bicycle tour of the West Coast.

Klaus Luttgen maintained dreams of faraway America as a child, especially of Alaska.

Five years ago the German national realized those dreams for the first time on an epic bicycle journey that took him from Vancouver, B.C., all the way to the northernmost of U.S. states.

Luttgen was motivated in part by what he said was a rocky relationship with his father, a citizen of Cologne, Germany, and a well-known collector.

His father passed away in 2008, before the pair could reconcile, but Luttgen was left with a collection of more than 20,000 of his father's carnival medals.
With his father's passing providing the catalyst, Luttgen embarked in 2011 on his Vancouver-to-Alaska journey, selling his restored vintage motorcycle to help finance the trip.

Though he had donated the bulk of his father's medal collection to a carnival museum in Cologne, Luttgen maintained 200 medals to give to those he met on his four-month, seven-thousand-mile journey. He said he distributed the medals to those who offered him kindness.

"Whether in the cities or on lonely highways in Canada and Alaska, on the way I repeatedly met friendly people who were very thankful for my small presents," Luttgen has stated.

Luttgen recalled one friendly young man in particular, whom he met on the Alaska leg of his journey. Luttgen exchanged a medal dating from 1973 with him in return for a gourmet cookie from an Alaskan bakery.

Having recently returned to the region for a second West Coast trip, Luttgen is now headed south, pedaling his bike from Vancouver to San Francisco this go-around.

Speaking to the Herald, Luttgen, who is in his late 50s, admitted the journey -- which takes him through Olympic National Park, along Oregon's misty coast, and on through the majestic redwoods of California -- can be hard going at times. But that's something Luttgen relishes.
Asked by the Herald why he chooses to make his trip via bicycle rather than other means, he answered, "I want to have a heavyduty tour ... Every kilometer is a little fight for me. I love the nature and spirit ... Everyday I say, 'Oh my, so much rain, heavy going. Not easy going, the hills.' But when I stay in my campsite, I'm so happy that I take this [course] everyday."

Luttgen, who is exceptionally fond of employing the word "lucky" in describing himself, and who documents parts of his journies on film, is scheduled to conclude his latest trip in San Francisco on Oct. 6. He said he'll then return to Germany where he lives and works in a small town near Cologne.