Man talked down from suicide atop Megler Bridge 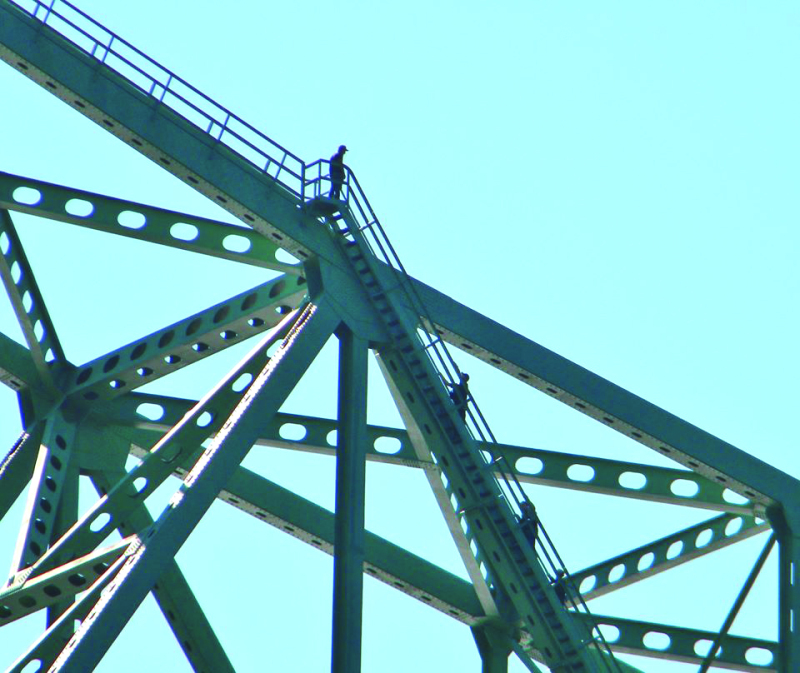 Photo Courtesy Astoria Mayor Bruce Jones - A 28-year-old man was talked down from committing suicide off the top of the Astoria Megler Bridge recently.

ASTORIA, OREGON - Hundreds of travelers were impacted by a standstill after a 28-year-old Hispanic man climbed atop the girders of the Astoria Megler Bridge and stopped southbound and northbound traffic for five hours last Saturday (July 25) afternoon and evening before being persuaded to come down by his father, according to Astoria Police Department Deputy Chief Eric Halverson who talked to the Herald by telephone.

At approximately 4:27 until 9:28 pm, Halverson said that the man was walking on the bridge when he took off running after he saw an Astoria Police Officer approach him. The man jumped over the gate and barbed wire fence that warns people to stay off that part of the bridge. "He ran up the staircase and climbed over it," Halverson said. "He was almost at the very top (197 feet), all the way at the apex of the bridge."

In a Facebook post, Astoria Mayor Bruce Jones spoke highly of Astoria Police Dept. Sgt. Chris McNeary, APD Officer Thomas Litwin and CBH. Jones said McNeary acted with "calm professionalism," adding, "Climbing the stairs to the top of the bridge (100 to 197 feet) is challenging enough without the added stress of an uncertain situation in a very dangerous position."

Also trying to talk the man down was a staff member from Clatsop Behavioral Healthcare (CBH) and a police officer. Halverson said also responding to the call were the federal U.S. Coast Guard Station Cape Disappointment, the Clatsop County Marine Unit and the Port of Astoria/Astoria Fire Dept. boat "Trident" in case aid was needed in the water.

Halverson said that the northbound lane was only closed for a little while during the incident; however people traveling southbound were impacted much longer and had to wait with their parked vehicles for five hours. Rather than wait it out, some north Pacific County residents opted to take the long way home through Longview.

Halverson said that both lanes had to be closed initially because there was an immediate concern that the man might be armed with a tire iron causing concerns for any passing vehicles. Halverson said it would be "problematic" if anything was "thrown at."

Halverson said with suicide attempts, "the intention is to harm themselves" and that "he was very angry toward the police and society.

"The officer tried to engage with him and tried to deescalate the situation, but he was not willing to come down,' Halverson said. "The officer agreed that he wouldn't take him into custody. His father talked him down."

Pedestrian travel is not allowed on the bridge. Halverson said the man could face several charges, including "criminal trespass in the second degree, interrupting the flow of traffic, disorderly conduct."

In the past 20 years, Halverson said this was "probably the longest" that an attempted suicide has taken on the bridge.

Since 2001, there have been 11 suicides on the Astoria Megler Bridge.