Mayor of Winlock called to resign from Republican Party 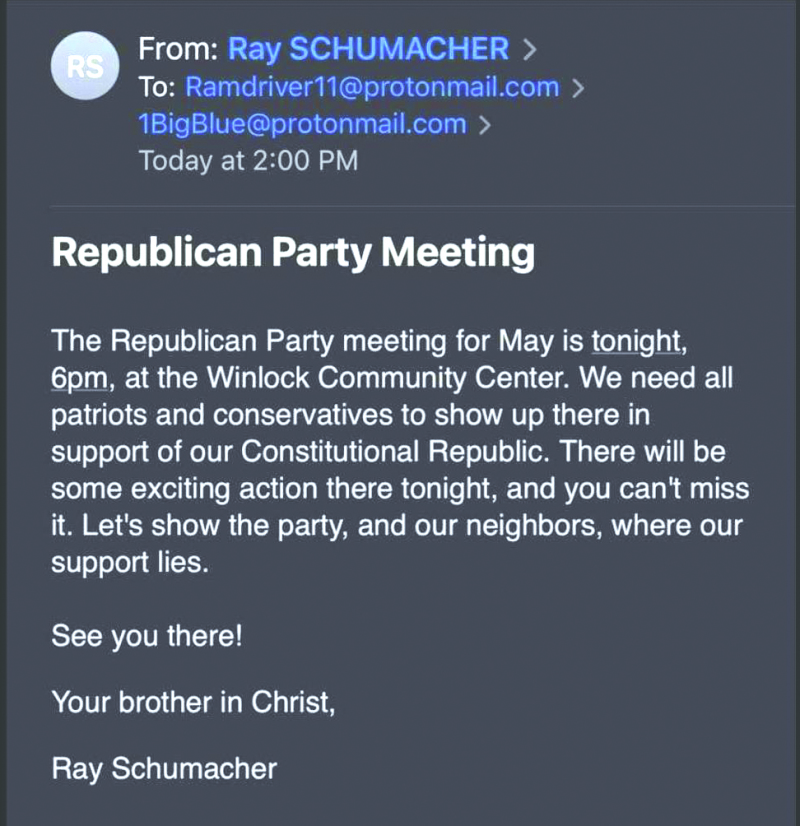 The text message sent about the Republican Party Meeting for May 2.

The Mayor of the City of Winlock Brandon Svenson, Chairman of the Lewis County Republican Party has been asked to resign over the bullying of a Republican candidate. The Washington State Young Republicans removed Mayor Svenson in March for bullying, name calling and working against the organization.

On Monday, May 2, the Mayor and Chairman got into a heated discussion, eventually throwing a piece of paper at Sheriff Candidate Tracy Murphy. There are specific rules that must be followed, Chairman Svenson refused, even after several discussions by the Republican Party Executive Board. Tracy Murphy's alliance to the Republican Party has been called into question by Svenson, but in a document from the state party states he voted Republican in 2020. Candidate Murphy is indeed a Republican.

A few individuals planned this harassment and bullying as you can see by the text message sent about the Republican Party Meeting for May 2.

Dear fellow PCOs, Over the past year, it has become apparent that our Chair, Brandon Svenson, has been unwilling to act appropriately as Chair of the Lewis County Republican Party. Our Executive Board members have discussed his behavior with him on numerous occasions, but it has not improved and, in fact, has become worse. We have seen recurring instances over the past year, both in our meetings and in public, where he has been very vocal in his contempt for his fellow Republicans. While there are dozens of examples of this behavior, the long list of inappropriate comments and actions from Monday night paints a fairly daunting picture all by themselves. The Republican Party has only one purpose: to elect Republicans. We have always supported all of our Republican elected officials and candidates, except in very rare times when the candidate or elected official was obviously someone who could not be respected by the party and its principles. PCOs are free to support and, indeed endorse, whomever they choose. However, the Executive Board is prohibited from endorsing. The Executive Board must maintain a neutral position on all candidates. Wearing a T-Shirt for a candidate at the Republican meeting is inappropriate when multiple Republicans are running. It is acceptable if a person who is not in leadership wishes to endorse or actively campaign for one candidate, but that person may not do so if he or she is an Executive Board Member. Anyone who actively rejects a Republican candidate should never be the Chair of our Party or even part of the Executive Board. On Monday, May 2nd 2022, at an official meeting, Chairman Svenson treated a Republican candidate, Officer Tracy Murphy, with contempt and disrespect. Officer Murphy made an obvious effort to defend himself from statements made by Chairman Svenson in a previous meeting. The candidate has friends and family who are part of our organization who were in attendance at our monthly meeting two months ago when accusations were made by Chairman Svenson. There was no doubt that the contemptuous accusations would get back to the candidate. When Officer Murphy attended the meeting this week in an attempt to defend himself, Chairman Svenson took it upon himself to accuse him yet again without allowing him to speak. He refused to even acknowledge his service to our community, calling him Mr. Murphy instead of Officer Murphy. These are not the words and actions of a worthy Chairman - especially when he crumpled up the letter written by the candidate and threw it at him. That is a childish and totally inappropriate action. Chairman Svenson also refused to acknowledge a board member who was asking for a point of information to stop the inappropriate behavior. The refusal was deliberate, and as the person responsible for running the meeting according to Roberts Rules of Order, he abdicated his duty. The Chair of the party is the person who oversees the meeting. The role is not that of a dictator and that role has no power to force the board to do his will. There are rules to be followed, but our current Chairman did not adhere to them, and has increasingly ignored the board's express requests and decisions. Without a vote of the board, Chairman Svenson demanded that we call the PCOs to meet next month to endorse a specific candidate. This is after PCOs were called to vote just a short time ago and voted that we would not be suspending our bylaws to endorse a candidate. Not only did he not have the power for that action, he wasn't even willing to take input from his board on the matter. I have attached a video of the Chair of the Lewis County Republicans in our meeting on Monday night. I hope you take the time to watch it. Anyone has the freedom to act as they please, but not as the Chair of our party. That position carries special responsibilities that require both evenhandedness and self-control. Chairman Svenson has shown himself unable to perform the tasks required with respect and civility. We have tried to discuss these concerns with Brandon for over a year now. But it is time to ask him to step down from this position. We need a Chair who is even-handed and respectful. We need a Chair who doesn't belittle other Republicans.
The letter was signed by State Committeeman Ron Averill, State Committeewoman Ruth Peterson, Secretary Sharra Finley, Treasurer Jeanne Hall, and former past chairs Colleen Morse, Fread Ryder and Penny Mauel. This was received from the Chairman of the Washington State Young Republican Chair. Per Mr. Chacon, the decision to remove Brandon Svenson and Rachel Anderson happened in March. Svenson and Anderson never shared the information with the GOP.

The WSYR Executive Board voted to send the matter to be reviewed and investigated by the WSYR Discipline and Conflict Resolution Committee. The committee reviewed all of the evidence and determined that Anderson and Svenson were guilty of bullying, name calling, and working against the WSYR which is illegal according to the WSYR bylaws.

The Executive Board adds that Anderson and Svenson's conduct does not align with the values of the Washington State Young Republicans organization.
The Lewis County News reached out to Svenson for comment, but as of publication time, he has not responded.