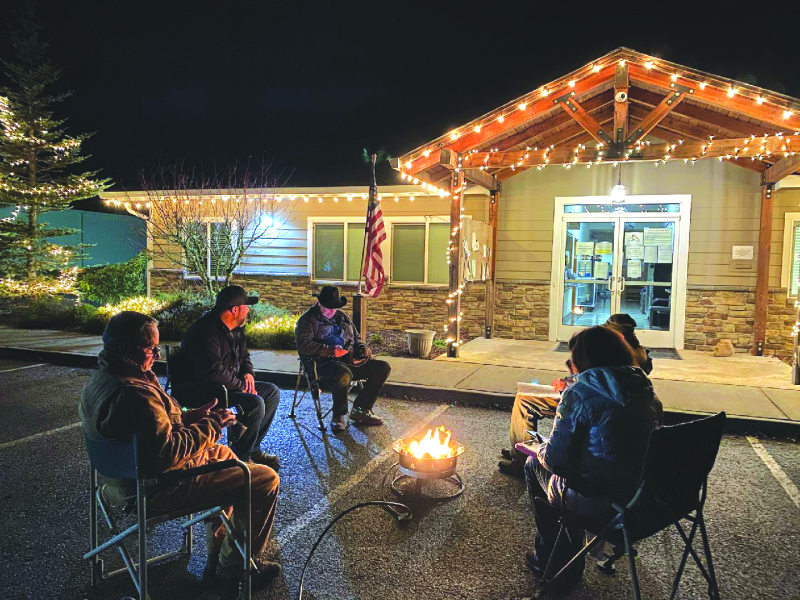 Photo by Lynnette Hoffman - Napavine's Planning Commission meet in the city hall parking lot after being locked out of Napavine City Hall.

Larry Hamilton, Chairman of the Napavine Planning Commission stated, "We held the Planning Commission meeting in the parking lot because we believe the citizens have a right to open public meetings. The telephone or internet 'meetings' don't qualify. The edict that you can't hold meetings or eat in a restaurant, but you can go to a store, makes no sense. The governor is wrong to disregard the law of open public meetings. We are properly distanced inside the building.

The city employees stayed inside. Why should the civil employees have to be concerned about keeping their job for holding a legal meeting? The people of Napavine deserve better."

Mayor Pro Tem Laverne Haslett was concerned that the council is being forced to continue with meetings on the telephone, where the people have difficulty participating. Haslett stated, "I was glad the Planning Commission did the right thing. The voice of the people is under attack, and progress and growth demand the Planning Commission meet in person. How else can people accomplish what is needed to proceed with plans? People need to realize that the actions of the Governor of Washington are all about control and that control is to control we, the people. The Declaration of Independence is clear that when a government attempts to curb the right to life and the pursuit of happiness, it's time the people take responsibility to curb (abolish) that government. The legislative body of the city of Napavine was not given the choice to meet in person at city hall. We were simply advised by the mayor that we WOULD abide by the mandate of the state ... and have a conference call meeting on the 22nd. I was in protest of not meeting in person, open to the public, but I am one voice. I will not participate in a conference call. The voice of the people is being effectively denied. We must stop bowing down to the unconstitutional mandates or we will lose freedom altogether. I don't think people realize just how close we are to that ... and it's we, the people that must speak up if we don't want to lose our Constitution altogether, which will be all the rights to freedom it provides."

Mayor O'Neill referred to RCW 42.30.70 which includes information about the governing body, in part it reads, "If, by reason of fire, flood, earthquake, or other emergencies, there is a need for expedited action by a governing body to meet the emergency, the presiding officer of the governing body may provide for a meeting site other than the regular meeting site and the notice requirements of this chapter shall be suspended during such emergency." The RCW is clear, "need for expedited action." This emergency has been going on for months, there is no need for expedited action. The RCW is basically meant for when the building can not be occupied due to an emergency such as fire, flood, etc, but in this case, the building is occupied by staff throughout the day.

Planning Commission member Arnold Haberstroh also had concerns about not meeting inside city hall, he stated, "The Napavine Planning chose to meet in the parking lot because we were locked out of Napavine City Hall. It is our responsibility to be available for our citizens during an open public meeting. The reason we keep meeting under any condition is so that we can move forward and not hinder the people's progress and small business in our community. I do not want to be a part of anything that slows down or hinders progress in our community. We have been social distancing and adhering to COVID guidelines. There is no reason why planning can not be in city hall with the employees, holding our meeting for our citizens. Please don't Seattle our Lewis County."

Deborah Graham echoed the sentiment of the others, she stated, "As a representative for the City of Napavine, I take my position seriously. Our planning commission is a great group, with different perspectives and ideas. And, we will always find a way to bring it together for the development of the city. Which is the exact reason that we came together, outside in the parking lot of city hall, socially distanced where we can and should group together to discuss and make some of the decisions for our city."

While the Napavine Planning Commission took the step for the people, the Declaration of Independence stated one of the reasons they wrote the declaration was because "He has called together legislative bodies at places unusual, uncomfortable, and distant from the depository of their public records, for the sole purpose of fatiguing them into compliance with his measures." It appears as both Governor Inslee and Mayor O'Neill are keeping the legislative body from conducting business in their own house.