Napavine swears in a new mayor 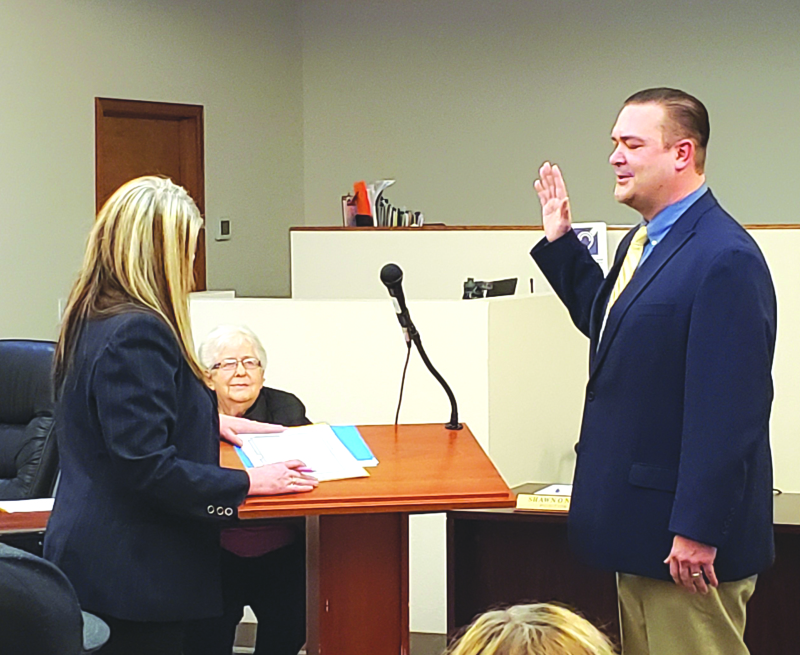 The City of Napavine has a new mayor. Shawn O'Neill was sworn in on December 30, 2019 and will have presided over his first council meeting this past Tuesday. O'Neill has been serving for almost three years on the Napavine City Council. He is a natural leader and wanted to take it to the next step.

O'Neill was asked why he decided to run for mayor, he stated, "My first contact with the city of government was through my responsibilities as president of Cal Ripken little league baseball. It was so difficult to just get the kids on the field. Even though it was a city park, the city required something new each week from us. I began to do some research and found it had nothing to do with any requirements other than what had been put in place by a few people at city hall. We began to do fundraising and raise money for improvements to the park, like covered dugouts, and new pitching mounds. We made several improvements worth thousands of dollars without the city lifting a finger."

"What really got me was when we put in the scoreboards", said O'Neill. "We had them put up and ready to go, when we were told we didn't do the permitting for the electric as it should have been. The first scoreboard sat unused for nearly a whole season due to the city dragging their feet telling us what needed to be done. I couldn't deal with having a kid come up and ask me why the scoreboard wasn't lit up. To a kid, seeing the warm lights of that scoreboard on a spring night was equal to the presents and lights around a Christmas tree. I'd had enough. I remember telling John (our former mayor) that if he wasn't gonna do something about it then I would one day, and be sitting in the seat next to him on the council. This was about the time when we were all appointed by the Board of County Commissioners as council members. I knew at that time that Napavine needed to make sure these kids had a safe place to play."

"I also wondered what other projects were stymied, and what other growth we were either turning away with the attitude of saying 'no' anytime someone brought a fresh idea to the table that didn't benefit the few in charge," he continued. "I knew if I wanted to know the whole truth and be a true change agent I would need to get involved. Everything was very secretive at that time. Several of us had meetings to decide how we would approach taking our town back. The city failed to fill the spots and the county had to step in. I actually wrote a paper on the corruption happening at that time, and the process of the county stepping in. The day I was appointed by the BOCC I knew I would run for mayor."

As mayor, he has a lot to do, but what is your mayor going to do first? He answered, "My first task as mayor is meeting with each and every staff member, and then meeting with the department heads. It's important for me to understand the perspective of the 'inside out.' I want to be a part of assisting the employees in identifying their professional goals and forging a path where these goals are realized. We must be healthy and thriving downtown if we expect that from the community."

Every mayor should have a goal of what they would like to see for their city, Mayor O'Neill has goals for Napavine. He stated, "First I want happy and healthy employees. We need a Police force that meets the needs of the community."

"We need responsible growth," he said. "This benefits us in several ways. I want Napavine to be the destination spot for well planned, upper-end housing developments. I want businesses in town that value the community they are in. I want our schools to reap the rewards that come with a strong local economy. I want to develop a more reciprocal relationship between the city and the Napavine School District. This one is tricky, but we must set an example of cooperation for our children. Together everyone achieves more. I want a large retailer for the bottom of the hill. Car, boat, grocery, recreation vehicles, etc. we could use the sales tax revenue to get our streets back in shape."

Napavine has been growing by leaps and bounds, Mayor O'Neill will be working hard to manage that growth with his council and city staff. He knows Napavine's needs as he has been sitting in the seat for three years paying attention. When he was asked about the growth and how to manage it, Mayor O'Neill stated, "Myself, Bryan Morris, Don Webster, and several other shareholders have been working with the county and Department of Transportation on the Rush Road issue. This one is our Goliath! The freeway itself isn't ready for the growth coming to both exit 71 and 72. The Rush Road studies will help us to better understand what mistakes have already been made at that exit, and what we need to do differently as we look to bring more businesses to exit 71. I wouldn't change a thing about Napavine. You can never walk a straight path forward while you are looking backward! There is a lot I could say that I would have done differently but if it weren't for the path we have taken we wouldn't be where we are today. I'm pretty happy where we are today."

It's hard to believe that almost three years ago, Napavine was in complete turmoil. The Board of County Commissioners had to step in and appoint a new council. Once the County Commissioners appointed a majority of the new council, the one remaining council member resigned as did the City Clerk and the Community Development person. From that moment on, the Napavine City Council set out to bring their community back and promote growth. The former reign of terror is far gone and the new Napavine is here to stay.