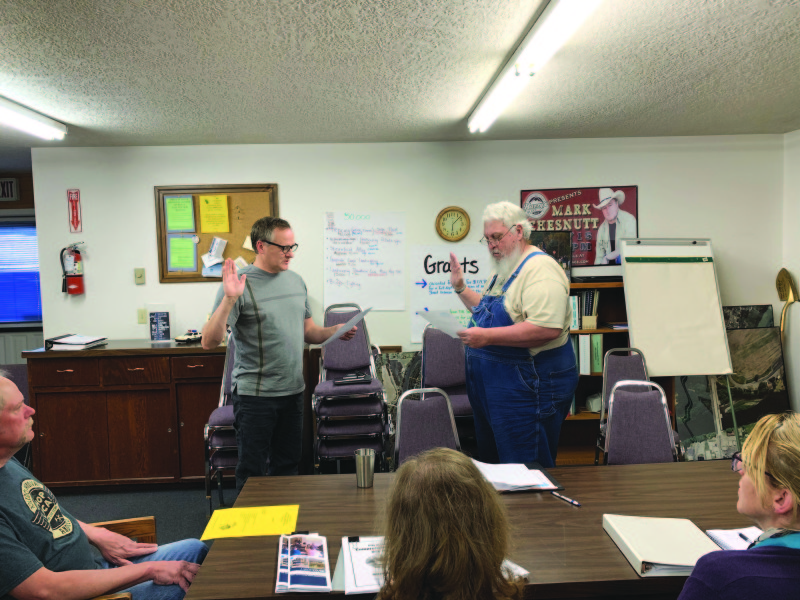 Eric Hayes sworn in as a member of the Planning Commission in Toledo.

Eric and his wife, Cindy moved to Toledo one year ago, during Cheese Days. They lived in Tigard, Oregon for 18 years before moving to Toledo. They are in the tech business, they design and write mobile applications. Hayes stated, "We found Toledo because of the internet. Toledo offers the best internet in the Northwest and is in the top five in the country. It was a necessity for us to have high speed internet. It's the upload speed that got our attention."

In 2009, the Hayes found their company Brewmium, a software company that specializes in designing and writing mobile applications. They chose the name because it stands for "we build apps brewed to perfection."

Hayes immediately got involved in the community. "We fell in love with Toledo. Since it's a small town, we have the ability to make a difference in Toledo. In the large cities, you are just another cog in the wheel, but in a small community you can make a difference one person at a time," stated Hayes.

He stated, "The biggest challenge is getting through the previous Comprehensive Plan. Redoing our 2040 plan which means we are looking ahead 20 years. In the 20 year comprehensive plan, finding ways for our city to grow. We have continued for years to be just over 700 and we would like to see our town grow. We need to be big enough to support our businesses and it's important to shop locally."

Eric continues to work extensively on the Comprehensive Plan. "We reorganized the old plan. We used the City of Napavine's Comprehensive Plan as a model. We have taken our old Comp Plan to be more organized. It's got us moving in the right direction," Hayes stated.

One of the things that Hayes appreciated was the state assistance "the state assisted us in reviewing our old plan and pointed out the necessary changes we needed to make. The state put out a document which included the RCW's for the plan. They also provided a list of what we needed in the new plan,' he stated.

Hayes continued, "The most difficult part in reviewing the plan was how disjointed the old plan. It's 14 years old and a lot has changed in the new comp plan."

Toledo is strong which it comes to parks as well, "We have a large amount of people who enjoy our parks, we support our parks and what their wishes are."

The Planning Commission in Toledo has five members, with Hayes being the newest member. Hayes stated, "I'm new to the process, but there are others who have been a part of planning that have helped me along the way. Being new I can bring fresh ideas to an area that we want to see growth. We want to see growth for our citizens, it will increase the revenue for the city. We don't want to see an explosion of the population. We want to see planned growth, that serve our citizens best."

Hayes has been busy since he moved to Toledo, "I had been attending Toledo City Council meetings to see what was going on. With the city government, I enjoy the debate process during the meetings. It's a diverse set of viewpoints which is important when you are making decisions. The input we have from the citizens brings the ability for us to make positive changes," Hayes continued.

Hayes also stated, "we need to encourage the opportunity for those who are single or limited income. We have many retirees who are on a fixed income and we need to keep Toledo affordable."

One of the things Toledo has to deal with is their main road through town is Highway 505. "There is a lot of discussion about State Highway 505. It's the main street in town and governed by the state," Hayes continued. "We are also reviewing lot sizes in the city. Michelle Whitten, Toledo City Clerk brought us more information to review for the designated lot sizes for the city. Our input is important and we do it for open government."

"One of the challenges with open government is getting enough members and attending meetings for a quorum. The last meeting we spent two hours discussing the comprehensive plan and we only got part way through it," Hayes said.

Hayes has enjoyed his time this past year in Toledo. He stated, "The people in Toledo are wonderful, our neighbors have become our family. It's a reciprocal relationship that you don't find in the big city. Plus we enjoy giving back to the community."