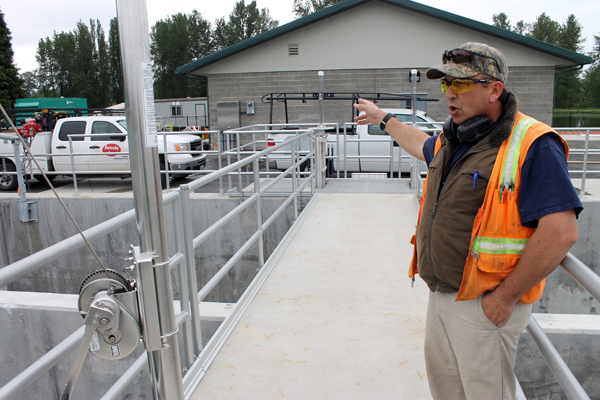 Toledo's new sewer plant has reached its initial stages of completion and, if it stands up to a series of tests scheduled for next week, may be online by the end of the month, according to city staff.

After more than 13 months of construction and seven years of planning, the city's new oxidation ditch-style plant is expected to both increase the capacity for sewer hookups in town, as well as replace an aging lagoon-style plant, which Public Works Superintendent Craig McCown said could not have happened too soon.

"I don't think we could have waited any more time to build this plant without putting a bunch of money into the old system," he said, stating both the mechanics and lab equipment of the lagoon system, originally constructed in the 1980s, all need some form of replacement or repair. "Timing-wise, this was impeccable."

McCown explained the new system, constructed by Vancouver-based contractors Rotschy Inc. and engineered by Olympia-based firm Gary & Osborne, is "state-of-the-art" and will provide the city with a greater purity of effluent, as well as more effective means of plant management.

"We can actually access the plant remotely," said McCown, stating the fully-automated systems of the plant are all controlled by computers, and public works staff would just need a laptop to respond to many emergencies during off hours rather than physically travel to the facility. "That's kind of neat. I don't have to drive down here at two in the morning if something goes wrong, is basically what it boils down to."

And with a higher anticipated electricity bill because of all the automation, McCown said engineers added a number of energy-efficient components to reduce power use, including LED lights, skylights and a ventilation system drawing warm air from the computer room to heat the rest of the building.

"We're trying to cut all the power down to as low a consumption as possible," he said.

The plant is also designed to be self-sustaining, as far as its use of water in the sewage treatment and testing process, with McCown stating non-potable effluent, after being purified and chlorinated, will be reused by the plant, so the only draw on the city's water system will come from human consumption.

"Overall, I think this is going to be a good one," he said of the new plant, stating a five-day test of all components is scheduled to begin this Monday and, if it is successful, sewage-digesting microbes will be introduced and the plant could be online by the end of June.

After that step, the city will begin the process of decommissioning the old lagoons, which McCown said may not be finished until later this fall, after which point the sewer plant upgrade process is expected to be complete.

In total, Toledo is expected to pay around $9.6 million for design and construction of the new plant, according to City Clerk Michelle Whitten, with $6.4 million paid from state and county grants acquired in 2013, while the remainder will be paid from a state Public Works Trust Fund Loan of up to $9.1 million made available in 2011. Whitten added, if the city is able to complete the project by the end of this year, as is anticipated, the loan will be paid back at 0.25 percent interest, otherwise it will be paid back at 0.5 percent interest.