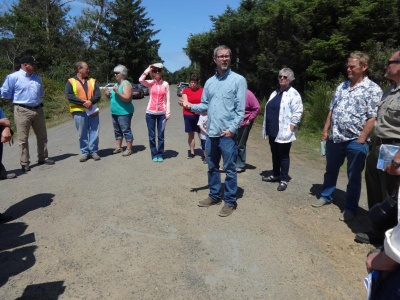 On the beaches in Pacific and Grays Harbor Counties, people dump garbage illegally in the night. Garbage here is staged to wash away with the tide on Washaway Beach.

The beach has been eroding for the last century and 70-100 feet and an average of five structures are washed away each year. In a recent year, 18 structures were lost.

“So with that, currently we’re working with all the solid waste issues. We all know that with these structures we have marine debris and we want to do something about it. We have a lot of political support from our county commissioners and from the Department of Ecology to start looking at doing something about this issue that’s happening here in our backyard,” Taylor-Eldred said.

“We don’t have just the structures falling into the ocean, but we also have a lot of illegal garbage going in – vehicles, septic tanks,” she continued.

Houses can Wash Away Overnight

The county has already created an erosion hazard zone, an area where new structures aren’t allowed, but numerous existing structures were grandfathered in – allowed because they were preexisting.

A number of property owners in the area have insurance on their houses and won’t reap the benefits until the house hits the water, one reason why so many houses end up falling in the ocean. Other houses are abandoned before they fall in.

Stanley Sabre, area resident, is a property owner with insurance - his house was built 40 years ago. Sabre explained that 30 years ago his house was a mile away from the ocean. Three years ago, he couldn’t hear the ocean. Now it is 19 feet away and the insurance won’t pay unless it hits the water.

On the tour of the beach, the officials saw a shed that was hanging over the edge, soon to fall into the ocean. Sabre explained that two days before the tour, people could still walk on grass all the way around it. Within a period of two weeks, that property lost several feet of land, and it wasn’t even during storm season.

“In one night a house can be washed away,” Sabre said.

Will Hamlin, the new Code Enforcement Officers at the county, has cleaned up three dump-sites in the last three months.

There’s not a shortage of disposal options in the area, but “it would cost to have a dumpster brought out to your property or to take it to the dump, whereas they could just dump it when no one’s looking,” he continued.

“Not just here, but up and down the entire beach people dump their garbage,” said Washington State Parks Area Manager Eric Plunkett. “They do it in the middle of the night and we find all kinds of things. We find furniture, garbage, televisions, computers, cars. I guess the reason is cost.”

“And that garbage just washes away, but unfortunately in the garbage world, there’s no such thing as ‘away’. It goes somewhere else, but it’s not away,” Pacific County Commissioner Frank Wolfe added.

“A lot of the people that might come down here and dump thinking it’s more isolated, I believe and our two convictions show, are actually Grays Harbor people,” Plunkett continued.

Earlier this year, 22 people from the community banded together to clean up one property that had been abandoned then taken over by squatters. They filled 250 bags and took six truckloads of garbage.

The officials brainstormed solutions to the solid waste issue, including getting funding from FEMA to possibly buy properties from owners before they fall into the ocean. “We know it’s going to erode, so let’s not wait until the waves hit it,” Taylor-Eldred said. Cleaning up marine debris from the ocean is more costly than clearing it before it falls in, she pointed out.

The county will also be working with a local block watch to crack down on illegal dumping.

“Education is always good,” Hamlin said. “Reach out to the people and let them know what their options are. Really, at the transfer station outside Raymond, it’s $.07 a pound for garbage. That’s really not that much. TVs, electronics, things like that, are free.”

“One of the things we’ve talked about is enforcement and citing folks [for dumping],” Taylor-Eldred added. “Usually if you start citing folks, if you can catch the dumpers dumping on camera and cite them, that usually has a pretty big impact. Word gets around.”