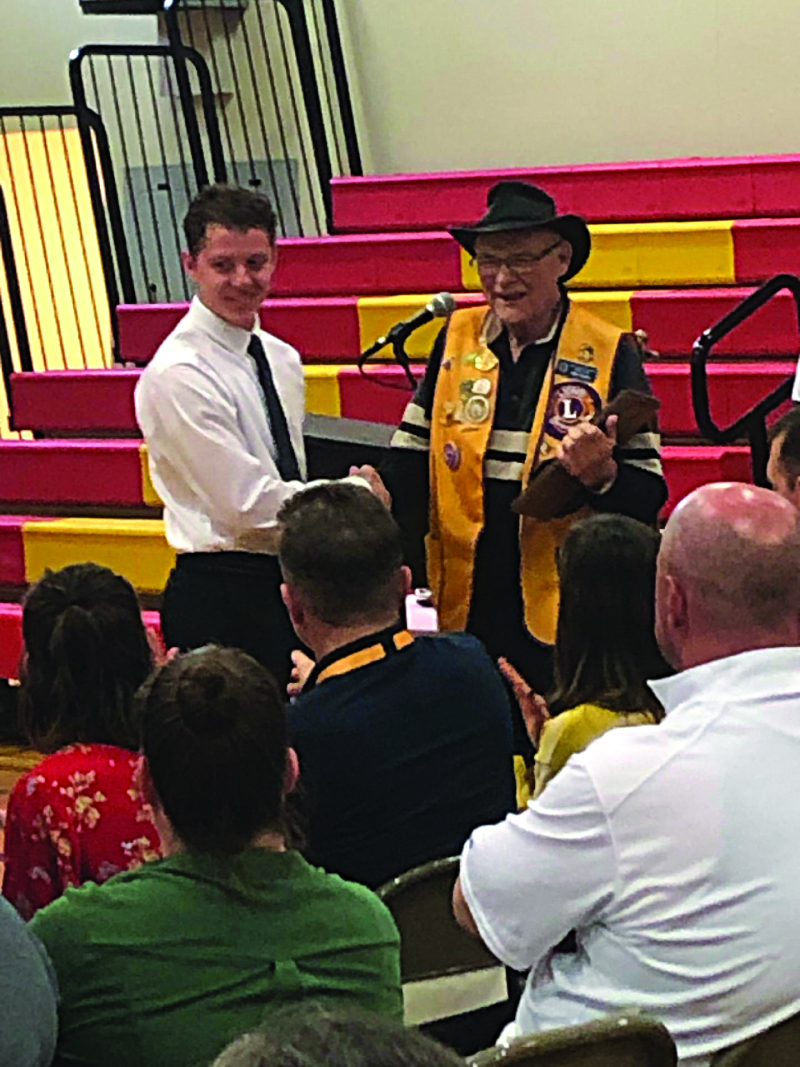 Neal Patching receiving the Otis Roundtree Award from Mike Porter who received the award in 1959.

The Otis Roundtree Award has been given to Winlock High School football players since 1928. It's an award given by the Winlock Lions Club and voted on by the players. This year the award goes to Neal Patching, his parents are Brandon and Nelia Patching.

The first Otis Roundtree Award was started in 1928 by Otis Roundtree. He was a businessman in Winlock and also a graduate of the University of Washington.

Otis was a man who made a huge impact on Winlock. He built the Winlock-Toledo road down to Cowlitz Corner; it was a feat to accomplish such a large construction site in those days. After the road was completed, Otis decided to hold an event called "Winlock Poultry and Egg Day." Otis was the person who started Egg Day and is an event we hold dear to our hearts.

Roundtree's business was the hardware store, but his accomplishments didn't stop there. He became town marshall in 1930. He was also responsible for bringing the telephone to Winlock. There is still one building named after Otis, it's called "The Roundtree Building." Mike Porter, recipient in 1959, continues the tradition of the Otis Roundtree award. Mike stated, "He left his mark on Winlock and Winlock is a better place because of him. Otis definitely left his mark on Winlock and every year we celebrate the event he started."

During this time, brothers,cousins, and father and son have won the award. Brothers Steve and Mike Barnett along with Dana and Chris Olson were past recipients. Cousins were Floyd Voie and Tim Voie. Father and son were Sam and John Meyers. Some years they had a two- or three-way tie, each recipient was given the award. This year it went to Neal Patching, who has quite a lineage receiving this award. Neal joins his family members who have received the award.

His brothers, Uncle and Cousin and Dad all received the award, for five decades one member of the Patching family has won the award.

This year, Neal Patching, the recipient, stated, "Receiving the award was a huge honor, and it means a lot to me knowing my teammates saw me as an inspiration. However, I wouldn't say I worked for it. Obviously the hard work I put in, in and out of the season, influenced the decision of my team to vote for me, but winning the Otis Roundtree was never at the forefront of my mind at any point."

The evening was for awards at the High School but Neal was quite surprised, he continued "Normally the Otis Roundtree is given at a team banquet in a more 'private' setting, so I honestly was not expecting to receive it that night, but being able to receive it in front of teachers, staff, and classmates was really cool. Regardless of my last name, my name on the plaque signifies the bond that the 2021 state team created, and their place in my heart."

He is also going to serve his church this next year, he stated, "I plan on serving a mission for the Church of Jesus Christ of Latter-day Saints, and then pursuing a career as a filmmaker."

Neal is very talented, Brandon Patching stated, "Of all of us who received the award, Neal is by far the most accomplished. Neal was a 2-way starter all four years of his high school career. Three of the 4 years they went to the playoffs. COVID was the only year he missed in the playoffs." Neal is quite the athlete, going with the team to state is always admirable.

The Otis Roundtree is an award that many throughout the year have cherished, what an honor to receive an award voted on by your teammates. Congratulations Neal!