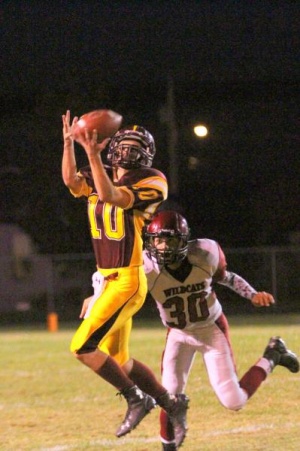 Photo by Larry Bale A game changing interception by South Bend's Jordan Dockter (10) in the 1st half. The Indians were on fire the rest of the game.

"We really had trouble with them defensively, as they were able to run the ball very well," said SBHS head coach Tom Sanchez. "In the first half especially, we just were not able to come up with any stops. The game changed late in the half. We were down 14-0 (two Caleb Tackett TD runs and PAT kicks) and scored on an 18-yard pass from Jordan Dockter to Austin Lewis (Raul Mora kick) to make it 14-7 with 1:28 left in the half. Two plays after the kickoff, Dockter intercepted a pass and returned it 52 yards for a touchdown to make it 14-13 at half. That play changed the game a bit.

"We then took the second half kickoff and scored on a 4-yard Ryan Overstake run," Sanchez said. (Overstake ran for the 2-point conversion) to give SB the lead at 21-14) Ocosta was driving after that score, making it to our 45 before fumbling. Overstake scored again on a 7-yard run (Mora kick) and it was 28-14. Overstake scored one more TD in the third quarter on a 58-yard run."

South Bend touchdowns in the fourth quarter were a 16-yard pass from Dockter to Jonathan Juarez (Mora kick) and a 10-yard run by A.J. Sanchez. Ocosta scored their final TD with 3:02 left in the game.

Defensively, Ben Byington was in on 12 tackles, and Overstake racked up 11 tackles and had two fumble recoveries, Dockter had 8 tackles and his interception return for a TD.

The Wildcats rushed for 468 yards on the night. The Tribe ran for 360 yards. Sanchez rushed for 51 yards on 9 carries. Ocosta committed 4 turnovers, including 3 fumbles and an interception.