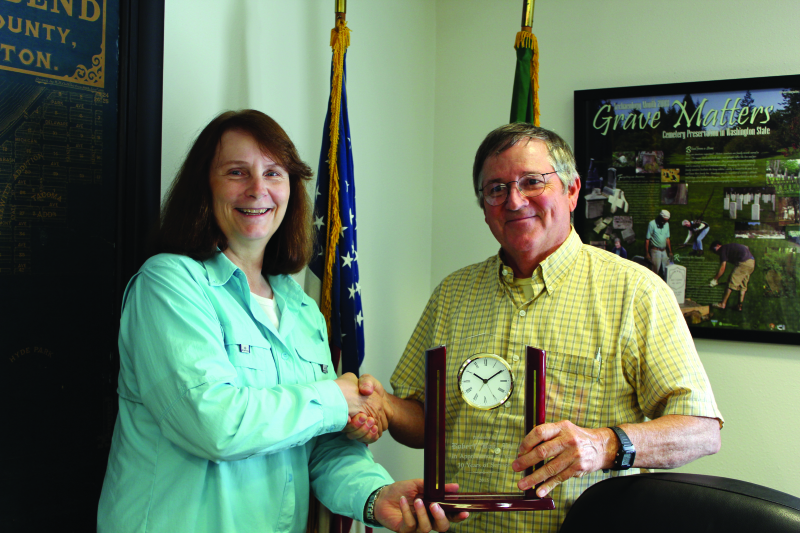 Mayor Julie Struck awards Councilman Robert Hall with a plaque for his 30-years of council service.

During the South Bend City Council resident Tom Giacoma spoke out about the condition of Maple Street in South Bend and the increase of sewer rates.

"I have been paying taxes here for over 11 years," stated Giacoma, "I have been trying to have you guys (the City Council), finish the job."

Giacoma is speaking about a strip of road that was repaired earlier, serves as a parking area and has not been deemed as a priority for paving. And is not scheduled in the recently released updated 6-year Transportation Plan for South Bend. Giacoma contends that the actions by the city are in direct violation of South Bend City Ordinances and that the city should be held accountable as they are in the midst of a double standard.

"Why is the city so reluctant to finish the job and obey the law," questioned Giacoma, "Can I get a date when this will be completed?"

"No sir we have no plans to pave the parking area on Maple Street, the road itself is in good condition," Mayor Julie Struck answered, "the South Bend 6-year Transportation Plan has to do with grant and other type funding, and Maple Street did not score enough to fall under the grant conditions."

Mayor Struck further explained to Mr. Giacoma that there are several parking areas in South Bend that are not paved, that the city does not have the money to pave parking areas.

Mayor Struck moved on to the next item on the Public sign-in sheet and allotted the resident their time to speak on their protest of Ordinances 1499 and 1500, dealing with the recent sewer rate announcement.

"I am Thomas Giacoma and am here to protest the sewer rate ordinance 1499 and I&I rates 1500," said Giacoma reading from a pre-written statement.

In his statement, Giacoma calls out the city for their miscalculations last year over sewer rates. And asked what the "real" rate increase would be as he found conflict from what the city was advising him and a newspaper article that was written on the subject reported.

Mayor Struck along with City Clerk Dee Roberts gave a breakdown of what the new rate increase would be when it comes to pass.

The base raise will be a $20 increase minus taxes. With the applicable taxes the final increase will be in the ballpark of $23.97.

There was continued back and forth again from Mr. Giacoma and Mayor Struck and in his summation Giacoma suggested that maybe the city council could take a cut in pay to help offset the cost of city business.

Mayor Struck invited Mr. Giacoma to her office anytime to further discuss what he sees as issues with the city on any subject that he cares to bring up.
The meeting moved on to other agenda items.

Three city ordinances; 1499, 1500 and 1501, the Water Shortage Response Plan, all went through their second readings with no council discussion, and unanimous approval.

One point that was brought out during the motion of ordinance 1501,was that the response plan was just that, a plan to be put on the books for the city, as they have not had one previously, and will not be called into action unless they need to.

"It is an emergency plan," said Mayor Struck. The Mayor had received some phone calls on the subject and wanted everyone to understand that the plan was for future needs of the city and will not be put into action unless deemed that the criteria was meet from the plan.

City Supervisor Dennis Houk had the only Department Head report advising that the Lagoon project is on track. Questioned by council member Robert Hall as to the estimated completion of the project Houk advised that mid-October is the goal.

Council member Hall has been in and out of the city council from his first time elected in April of 1981.