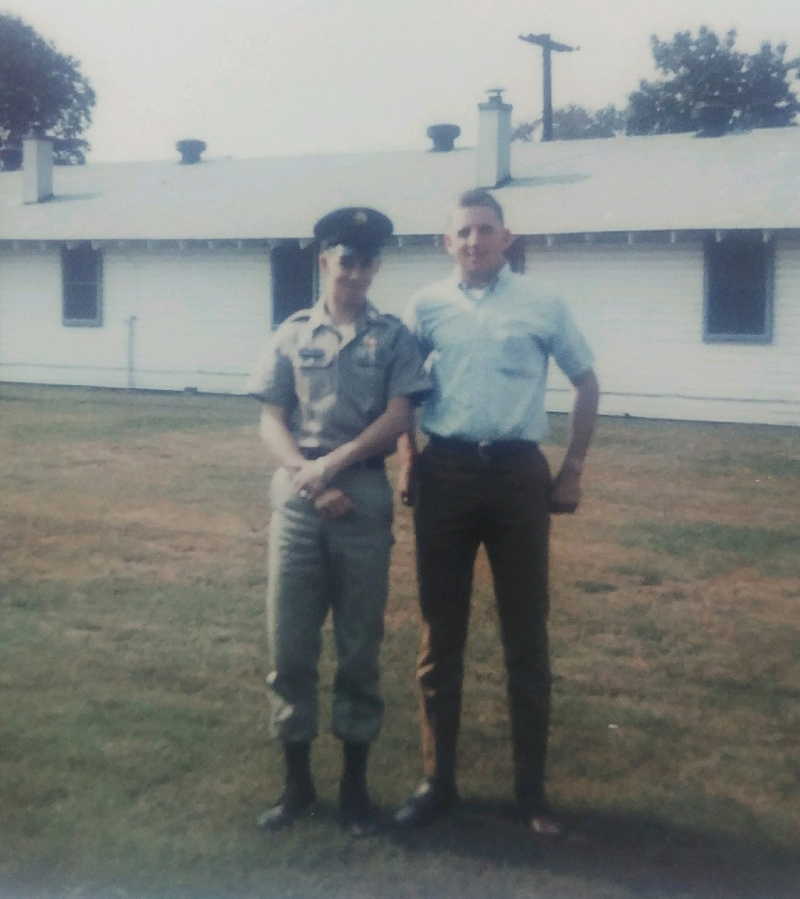 Randy Pennington in uniform with Trueblood. Trueblood gave all for his country. He lost his life in Vietnam, but his name will never be forgotten.

Many of us know someone who was in the Vietnam War. Some veterans will talk about their time there and others still have difficulty talking about the events that occurred. One individual who is willing to talk about his time there is Toledo Reserve Police Officer Randy Pennington.

Randy is one of those rare individuals who gives back to his community. He also gave back to his country at a time when it was not popular to do so. Randy enlisted in the Army in December 1968. He was delayed entry until after he graduated from high school.

Immediately after he was graduated he went to Fort Ord for basic and infantry training, then on to Fort Monmouth for specialized training in radios. He was then sent to the United States Army Signal Center and school in Germany where he spent nine months. From there he shipped out to Vietnam where his life would be forever changed.

The first place he was sent was Cam Rahn Base and eventually to Dong Ha doing long range reconnaissance from 1970 to 1972. While in Vietnam he would experience many things that would shape the rest of his life.

Randy stated, "We were just kids... I had the unfortunate experience of trying to help my friend get to a helicopter since he had been shot in the chest. My friend did not make it." You can tell this had an emotional impact on Randy because his eyes welled up with tears as he talked about the experience.

Randy met one of his classmates from high school in Vietnam, Ken Perry. "Unfortunately, his name is on the Vietnam Memorial Wall in Washington D.C." Another friend lost in Vietnam and another heartache.

Randy went on to say, "when you are deployed, everybody is part of it. Every soldier is part of it. Those of us out front could not have survived without those in the rear. Nurses were part of that and they were our angels."

When Randy was discharged he decided to re-enlist for several more years. "I don't think I was different than any other person who served in Vietnam. When I returned I didn't fit in so I re-enlisted," he stated.

The Vietnam veterans were treated so poorly when they returned home to the states. They were told not to wear their uniforms. Imagine, proudly serving your country and then to come home to protests and being called names. I can't imagine their heartache. Randy said he saw the protests but he didn't try to stop them. "I didn't agree with what they were doing. We were fighting for freedom for the Vietnamese. I would fight to the death to give our citizens the right to protest. It is our right to have the freedom to speak."

"We talk about WWII veterans as the 'greatest generation' but our Vietnam veterans were the best of their generation," Randy continued. The legacy of the Vietnam veterans is clear to Randy: "Never again will a veteran be shunned. You see that with the Gulf War veterans. They were immediately taken care of." It took decades for the government to assist the Vietnam veterans who were dealing with PTSD or other wartime issues. For decades they suffered in silence.

"As a civilian, after my discharge, I trained Rangers for the Army. I was also a paramedic for the City of Tacoma. Three of us left Tacoma and were the first paramedics for Lewis County." Randy has been giving back to his country and community since he was discharged. He has been a Reserve Police Officer for 30 years and in the Fire Department for four decades. He has served his country and community with his heart and soul and for that, we appreciate you Randy.

Thank you for your service. We owe our freedom to men and women like you.