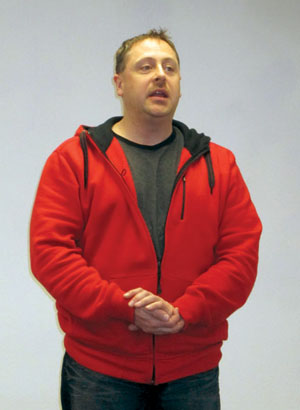 Robert Butler, owner of Castle Rock Academy of Kung Fu, during a presentation to the Vader Neighborhood Watch Friday, where he spoke about the basics of self defense.

Butler highlighted the three principles of personal empowerment-self-awareness, self-defense and self-esteem-to around a dozen residents in attendance. Emphasizing these principles, Butler presented scenarios to illustrate his points.

"Commonly today, we see especially the younger folks walking with their attention on their cellphone, texting as they walk head down, ignoring their surroundings," he said. "Be alert and attentive to your environment and notice people, places and objects."

Skill in martial arts need not be intensive, he said, as it was noted among Neighborhood Watch participants most have grown beyond their limber years. Should an attacker approach from behind, explained Butler, and wrap their arms around you, simple defensive measures like eye-poking will trigger reflexive release by your opponent. Keys protruding from a tightly closed fist and a canister of mace are also effective deterrents as well.

Butler added Tai Chi, sometimes referred to as Poetry in Motion, restores and instills the natural balance of youth, evident in a confident, purposeful stride rather than an ambling, shuffling gait.

"Exuding confidence as you walk portrays you as a less-attractive target" he said.

One participant shared a tip with the group: "If you find a van with a sliding side door positioned next to your own driver's door when you emerge from a store, either avoid that route, walk right past your car, or enter from the passenger door. Turning your back on that van when you unlock the car door presents a perfect opportunity for abduction."

She added the panic buttons on newer key fobs are a great portable alert system for any worrisome situation, the noise grabbing attention and discouraging would-be muggers.

Joined by his wife and daughter, Butler espoused the value of the entire family adopting these principles as prudent safety measures. In fact, when this reporter jokingly asked him who would escort me to my own car in the dark, he offered to do so. But I accepted the offer from his wife and daughter. After all, theory is fine, but practice makes the difference.