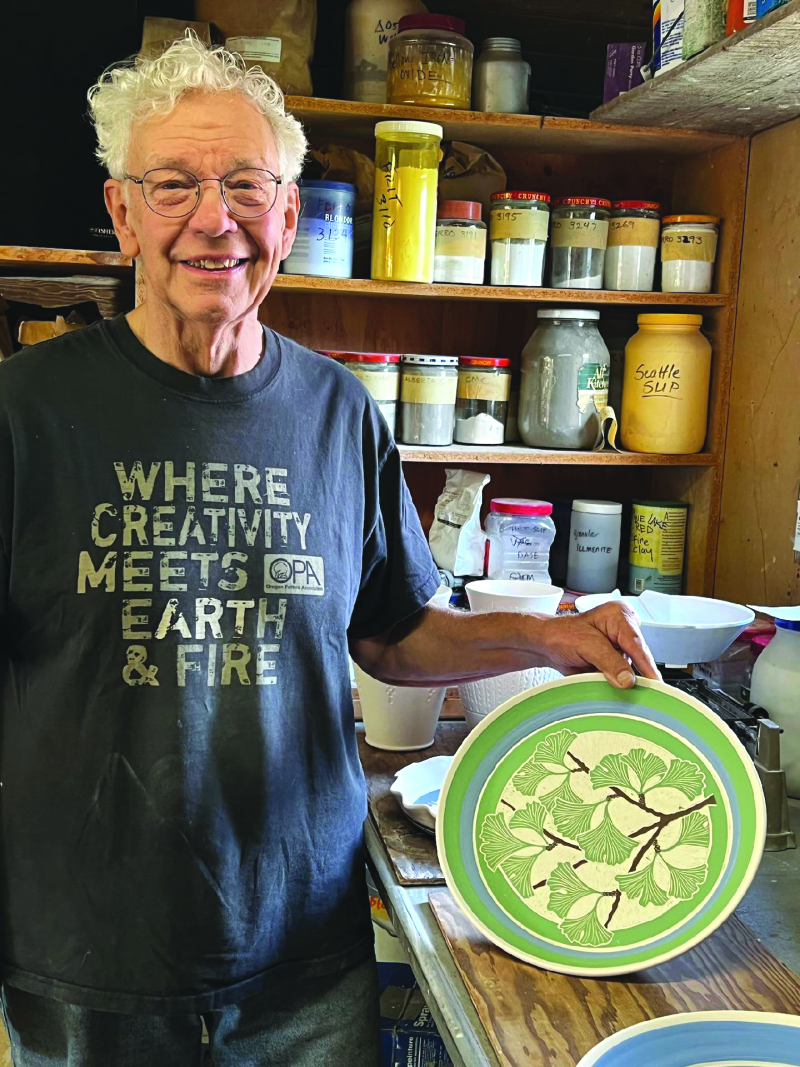 Richard Roth with his beautiful work displayed at his studio in Winlock - Grand Prairie Designs. This piece is hand carved and will be available during ARTrails.

This year marks the 20th Anniversary of ARTrails, a group of local artists who showcase their work and their art studios. Richard Roth, Grand Prairie Design, has been a part of ARTrails since the inception. Richard is the 3rd generation living on his family farm and showing his work for all to enjoy.

Richard is a 3rd generation Winlock resident. He has lived in California but came back to the family farm after years being away. His parents Fred and Eloise Roth were active in the community, as were his grandparents. Richard would come home to Winlock when he lived in California to visit his family and many of us were lucky to see him when he was home. He always had a flare about him. He was a "hippie" as they called it, but a hippie with craftsmen quality work.

Richard came back to Winlock to help the family, he stated, "I returned to Winlock when my mother passed away and my father needed support on the family farm. At the same time I had become disillusioned with city life and was looking for an alternative. I thought the farm was a good place to relocate my pottery business and to raise my family. I had been a potter in Sonoma California for ten years and had a thriving business. The farm had a building that I could renovate into a large studio and gallery." He has renovated the studio, Richard has kilns for drying his pottery throughout his studio.

Pottery is made with clay, but it takes a skilled hand and eye to know what it can look like as a finished product. Richard has always had that skill, he stated, "Clay attracted me because I could make any form I wanted quickly. I discovered my artistic nature by using clay as my medium for expression. I have done pottery in Sonoma for ten years and now at my farm for 42 years. Working with clay is an experience that changes each and every time I touch it. New possibilities for design arise and challenge my skill to create a work that pleases my artistic sense and fulfills its functional use."

Richard has been a part of the Lewis County art scene since his return. He gained experience from Sonoma that he would bring to Lewis County. He continued, "In the late 90s my wife Susan and I became involved with a studio tour in Northern California, 'ARTrails of Sonoma County.' Doing the tour gave me a chance to meet working professional artists and give me a venue to market my work. I had always wanted to be involved with a group of artists in Lewis County for sharing ideas. This studio tour gave me the inspiration to gather with local artists and promote the arts in Lewis County. This year is the 20th year of ARTrails of SW WA Studio Tour."

ARTrails takes place on September 17- 18 and 24-25. They have over 30 artists who participate in this event. The artists offer paintings, wood carvings, jewelry, photography, stained glass, dyed silk, mosaics, and of course pottery. The locations go from Centralia, Chehalis, Toledo, Winlock, Adna, Cinebar and Silver Creek, there is something to find in all their studios.

Richard and Susan Roth live on the family farm on Roth Road. Many of us know them for the corn they deliver to Cedar Village for all of us to enjoy. This year they let their fields rest but we anticipate they will have their corn available next year. Knowing Richard for most of my life, he has always been honest, involved in his community and a sense of peace when you are with him. He has brought his skills to Lewis County and Winlock, his work is beyond beautiful as depicted in his picture. If you want to see beautiful art in Lewis County, take the ARTrails 2022 Studio Tour, you will be glad you did. If you start at Grand Prairie Designs, which is Richards studio, you will be pleasantly surprised at the craftsmen quality work you will find there.