Sam Patrick moves up the ranks 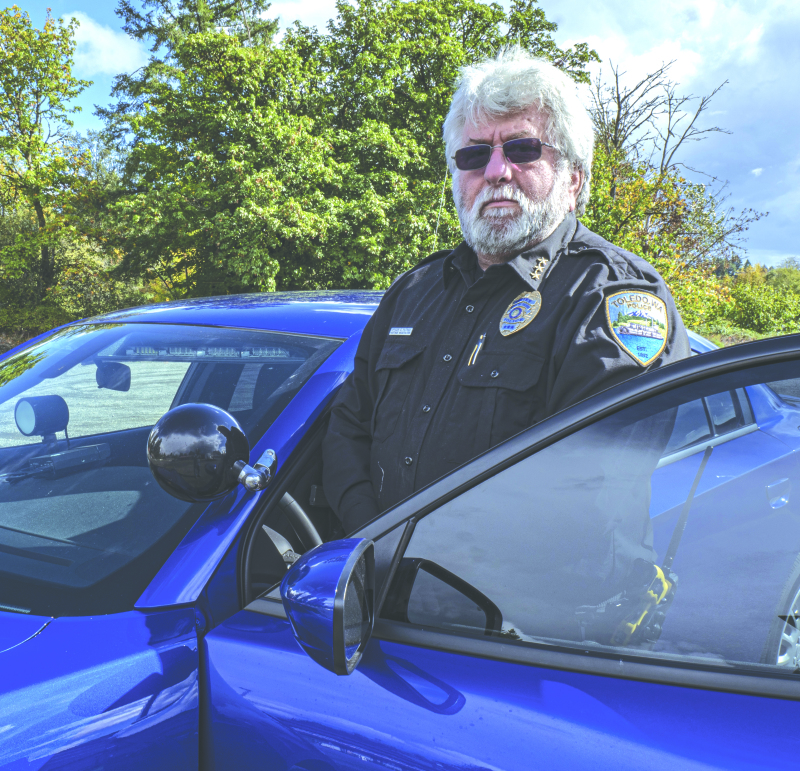 Chief Patrick has extensive training and is part of many programs in Toledo. He stated, "I have worked for the Toledo police department since July 1, 2010 under Chief John Brockmueller. I have been the Thursday through Sunday patrol officer until the Winlock/Toledo police contract where I was promoted to patrol sergeant. I am also a certified fire investigator and collision technician as well as a certified motor officer. I was fortunate to be allowed to start the police motorcycle program in 2010."

Toledo knew they would have a difficult time filling Chief Brockmuellers position, they were lucky enough to have someone who knew so much and could step up, but it was not an easy decision. Chief Patrick continued, "Applying for the chief's job was a tough decision as I had the opportunity for a position following chief Brockmueller to the Napavine Police Department. After careful consideration, I decided that I am near the end of my career and retiring as a chief and putting my own positive influence on the Toledo Police Department in my last few years was going to be the way to go."

What will Chief Patrick do for the city and what skills will he bring, he stated, "People can expect me to be a working chief and see me both daytime and nighttime depending on needs for service. I expect to hire a like-minded person that knows this is a small town that enjoys the freedoms of safety and security. It will be my job and anyone who works for me to understand that concept. This department will conduct law enforcement business within the scope of what the law allows and be a community partner." He stated he will be "approachable, flexible and reasonable."

Chief Patrick has one request for the community, he continued, "One thing that sometimes gets missed is the fact that a small department such as Toledo does not have office staff 24/7. Therefore I would encourage people to call 9-1-1 for in-progress issues requiring law enforcement intervention. Citizens can also call dispatch non-emergency number 360-740-1105 for prompt response. Over the last decade-plus, I have worked in Toledo. Many citizens leave messages on the answering machine in the office. There is no way that you can receive an immediate law enforcement response when you need it, unless you call dispatch at the listed numbers, please."

Mayor Steve Dobosh wanted a chief he knew could do the job, he stated, "I chose Sam because I believe in coming up in the ranks. I asked if he was interested and he said, 'Ok.' I took it to the council, they approved Sam, and he was sworn in on Monday. Chief Patrick knows Toledo inside and out. Sam knows every person, every nick and cranny in Toledo. So warning, Sam's got his people so you will get caught."

Sheriff Rob Snaza and Napavine Chief John Brockmueller were present when Chief Patrick was sworn in and pinned. Sheriff Snaza stated, "I am very excited for Chief Patrick, I have known him for several years. His commitment to the community is unwavering. I am excited to see him in his role. Sam has taken a lot of training classes and is a training instructor. He brings with him a lot of skills."

John Brockmueller, Napavine Chief of Police and former Toledo Chief of Police stated, "Sam has been a major asset to the city for over 10 years. He is a great choice for my replacement. He knows the city and it's citizens. Congratulations to Chief Patrick."

Chief Patrick has been on the job for little over a week. He will have his own style, while working with many citizens on issues. He will keep an eye on Toledo for the citizens and continue to keep it a safe place to live. Congratulations to Chief Sam Patrick.