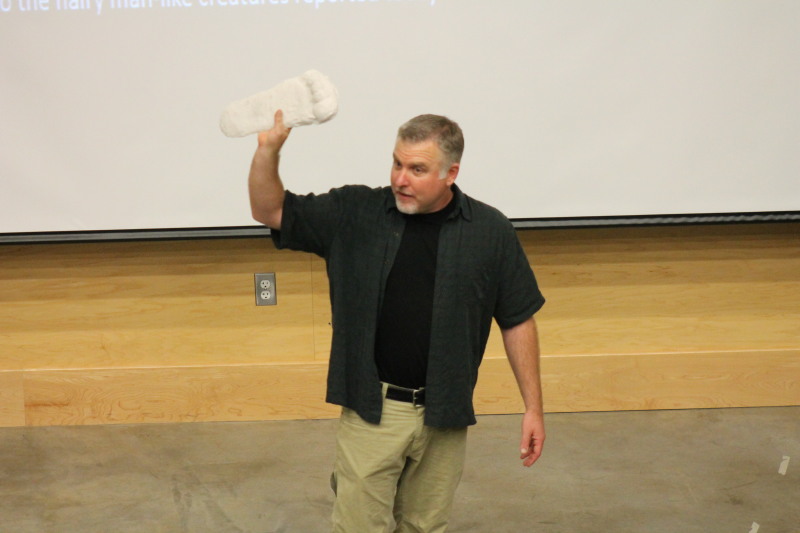 Gathered in the Walton Science Center of Centrailia Community College people came from all around to witness a presentation given by famous Sasquatch researcher, Cliff Barackman. He is well known for his involvement on the show "Finding Bigfoot."

At this presentation he informed the crowd that he was not there to convince but to inform. Barackman continued to say that he would be presenting the evidence of the existence of bigfoot. He stated to the crowd that he knows that Bigfoot are real for he has "seen them, smelled them, tracked them, and had rocks thrown at me." Letting this statement settle into the audience he advanced into his topic by claiming that there was tons of evidence but no proof.

With this statement, he described that he believes that people were still "stuck in the Victorian age" and that no one will believe in the existence unless a dead one is brought in and shown. Following this previous statement he said he does not advocate the killing of Sasquatch. Barackman went on and said that if one of these creatures is shot it would be "rude and it would show who the real monsters are."

Next, he directed the audience's attention to the PowerPoint he provided that would display his evidence. Opening the presentation he displayed a slide of various facts. Amongst those facts were the statements of "over 70 years, people have been finding foot prints" and "every Native American culture has stories of a creature much like Bigfoot." After he read the rest of the facts he moved into a section of describing the Native legends and showing the evidence. In this evidence Barackman provided pictures of various masks from various tribes. One of the masks he had showed a picture of a creature the natives called the "hairy, giant, wild woman of the woods." This mask was a creature with pursed lips to represent the whistle noises this creature makes. Also on this mask, this creature displayed very large hands with long thin fingers. After explaining these features, he told the audience that he heard the whistles and other sounds the creature makes. As for the large hands, he showed the room his cast of a knuckle print that was claimed to have been left by a Sasquatch creature. Also under the discussions of the myths, he described to the crowd the creation myth behind the rock drawings from Painted Rock in Arizona. In this myth, it was said that "hairy man" had lost in a race to Coyote for the creation of other creatures. When Coyote tricked Hairy Man, the rest of the creatures were made to walk on all fours like Coyote did. It is said that Hairy Man was sad about the defeat and as his tears fell, mankind came from his tears and that is why humans walk on two feet. Also included in this topic of myths, Barackman told the stories and accounts of contemporary witnesses and sightings from Oregon, Maine, California, North Dakota, and Spokane.

Barackman moved from the previous topic into other forms of evidence he has collected. In the next topic, he had provided sound recordings but due to technical difficulties no sounds could be played. After this trouble Barackman continued to describe these various sounds he has captured and heard. Amongst those sounds are "yells, howls, screams, whoops, whistles, chatter, and knocks."

Barackman's next point of discussion was the different photographs and videos he has collected over the years. After showing his various pictures from witnesses he has met,he thanked technology and it's advancements into getting thermal video. Barackman explained that since Bigfoot is nocturnal the thermal footage is much better. After showing the audience the various footage, he began his explanations on the footprints.

Starting this topic he told the crowd that people had been collecting these footprints since 1958. As he showed the slides of the feet and displayed the casts he had brought with him he explained the science of the prints. In this science he described how the ankle bone of Sasquatch was farther from the heel than a human's ankle bone is. Also, humans have a "longitudal arch" while the Sasquatch creatures don't. He proceeded into the topic of DNA. Barackman continued that in the footprints people had found skin details, fingerprints, and hair samples but none of these findings held enough DNA to get a full read on the creature.

As Barackman began to close his presentation he told the audience that he didn't come to the college to convince anyone of this belief but how he "wants to share love about Bigfoot with other people." In closing, he reminded the crowd that more information and evidence could be found on his website: CliffBarackman.com.