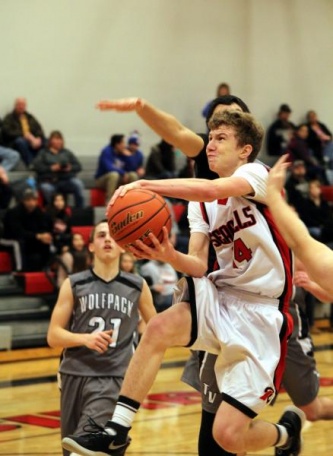 Seagull Jayce Freeman slices through the Wolfpack on his way to another basket for Raymond. It was the New Years Classic hosted at Raymond with five schools in a round-robin basketball back-to-school tournament.

Working a few practices just after Christmas, the boys took on the Twin Valley Wolfpack and wrapped them in Holiday Cheer 56-34.

"For us its getting back to what we know and trying to fine tune what we have established already," said Derek Rask, boys' head basketball coach.

And the Seagulls left no presents for the visiting Wolfpack.

Straight out of the gate the tempo of the court was all Raymond. 17 unanswered points in the first period set the tone for the contest, and it looked like the Seagulls had a full bench of possibilities.

It was only during the final minute countdown did Twin Valley's Dylan Lines put back a basket to announce the arrival of the Wolfpack. Teammate Jace Anderson fired right behind him with an outside hitter to back him up.

But a collective of Seagulls had already registered on the scoreboard and it looked to be almost all wrapped up.

Twin Valley was able to convert in the second period but still lagged 20-points behind the Newman school for three-pointers. Seagull Rayce Newman led the team with 23-points, but it was his quick lesson in back-to-back net twitches during the fourth quarter that made the Wolfpack call timeout and re-focus.

"It was Rayce Newman that gave us the energy we needed tonight," spoke coach Rask. Newman, just contributing during the first half of the game, was feeding the ball to teammate Landon Maneman who tallied the second most points for the Seagulls at 12. But after the half, Newman looked rejuvenated and made a total of three; three point baskets for Raymond in the final period.

Raymond controlled down the court on offense and held a full-court press defense on their opponent making the game look simple and easy. The ability to keep a larger point-spread from Twin Valley allowed the bench to be utilized with everybody seeing time on the floor.

For the first night of the New Years Classic, it was a winner for the Seagulls, but they would next face Rainier who had almost caught them in a mid December showdown at home.

The Seagulls will match up against South Bend this coming Saturday for a 7 pm tip-off at South Bend High School. It will be the first meeting of the season for the Indians and Seagulls.