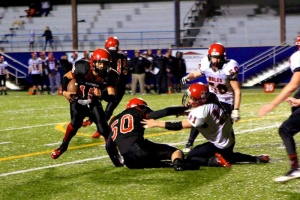 Photo by Paulene Maneman...Raymond's Alex Sida scored all 3 TDs for the Gulls.

ABERDEEN – Raymond advanced to the Elite Eight of the Class 2B State Football Championships with a heart-stopping 20-14 triumph over Wahkiakum in a game played with mean winds and steady rains Friday night at Stewart Field in Aberdeen. Alex Sida’s 9-yard TD run proved to be the game-winner with 11 seconds to play. Sida scored all 3 of Raymond’s touchdowns. Sida rambled for 150 yards on just 10 carries.

“The turning point was when we got the wind at our back,” Raymond HS Head Football Coach Rob Clements told the Herald. “You couldn’t throw the ball against that wind. The ball flutters and floats. Both teams had momentum and control when they had the wind at their backs.

“He (Sida) ran hard and didn’t get touched on that first run,” Clements said.

“He was finding lanes and was focused and ready to play.”

The Seagulls (8-1) next take on Napavine (10-1), a 44-16 winner over Concrete in a game that played at Sedro Valley Saturday night. The Tigers’ only loss this season was a 41-7 whipping at the hands of top-ranked (AP) Morton-White Pass.

The game is scheduled for 2 p.m. this Saturday at Stewart Field in Aberdeen.

With the swift and misty rain turning more on than off, the game was flooded with all the traditional faux pas’ of classic gridiron action in fumbles, interceptions and lost yardage, which took the game to a final second rush at glory.

The game knotted at 14 points a piece, the final quarter was a defensive conflict that would drain the clock to the final 15 seconds, enough time for the Raymond Seagulls to take one last snap of offense and see Sida slip across the line for the wining touchdown advancing the Seagulls into the quarter finals of their 2B state football run.

“It was a hard fought football game, two good teams battled it out,” Mules Head Coach Eric Hansen told the Herald. “They made the play at the end. They are a good football team I wish them well. I am proud of our boys, the entire team. We have a lot of seniors and I asked them to give me all they had and they did. Very proud of them,”

On his first two rushes of the game, Sida scored on runs of 60 and 71 yards – giving the Seagulls just enough offense to get past the stubborn Mules, who closed out the season with a mark of 7-3.

In the final quarter each team prevented the other from advancing too far down field and forced the other into punting situations. The game took on a feel of an eventual pending Texas tiebreaker overtime as the Mules gave up the ball one final time with the final minutes falling off the clock.

On the winning drive, the Gulls set up shop midfield with about 3½ minutes to play. Quarterback Rayce Newman completed a pass to Sida good for 22 yards. Sida is a fast, shifty strong runner (5-10, 170 pounds) and can squat 400 pounds.

“Alex made a nice reception to put us down the field,” Clements said.

The Gulls gained the next 22 yards on the ground, but then lost 3 yards before Sida ran around left end, broke a tackle and bolted into the end zone. Seagull James Hamilton was in the right place to assist Sida with the needed balance and ran with him to the end zone with 11 seconds left in the game.

The closing seconds was all academic for the Raymond Gulls as all they had to do was stop the Mules on their final run with the ball.

Raymond took the lead with only 23 seconds expired on Sida’s first TD jaunt. Andres Martinez booted the PAT for a 7-0 edge. Sida added his second score on a spectacular run where he reversed direction, broke a tackle and flashed his speed to the end zone. With 8:35 left in the first quarter, the Seagulls were off to a 14-0 lead.

Sida had a TD nullified on a holding penalty after he ran in from 46 yards out.

The Mules worked their way back into the game with a 3-yard run by running back Mason Mackey with :34 left in the first half. Mackey blasted in for the 2-point conversion for a 14-8 intermission score.

Wahkiakum drove 60 yards culminated by a 4-yard run by Mackey, but Mackey’s 2-point try was thwarted and the teams were knotted at 14.

Marvin So intercepted a pass and made a nice return but the most of the run was taken back because of an illegal block.

Raymond fumbled the ball six times and lost three of them. Wahkiakum lost one fumble.

A big, physical Napavine team is the next hurdle for Seagulls. Raymond defeated the Tigers in its first game last year in the playoffs, but that was last year.

“Napavine is similar to last year,” Clements said. “They’re big up front and they have a very good running quarterback. They block very well and really have good size and are very physical.”

The Tigers rotate two quarterbacks – one is more of a passing while the other is more adept at passing the ball. “They’ve done that all year,” Clements said. “They run the quarterback power option and they like to spread you out and get the inside run lane.”

Clements said that Seagulls would have to hold onto the football better than they did against Wahkiakum.

“We’ve got to stop fumbling the football,” Clements said. “We’ll have to execute, which is what that will help us do. We have to be sound defensively. When Wahkiakum ran the ball, we weren’t prepared to play physical again. Against Napavine, we will definitely have to stop the run.”

“Offensively, against Wahkiakum we blocked well, but we put the ball on the ground six times and it killed drives.”

The other three quarterfinal games include Reardan vs Adna, Lind-Ritzville-Sprague vs Colfax, and Morton-White Pass vs LaConnor.